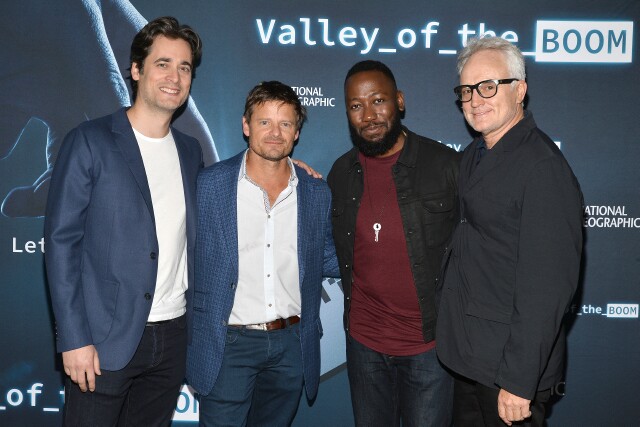 Since National Geographic rebranded by pushing itself further two years ago, it has taken us to new worlds with Mars, which launches Season 2 Nov. 12, and pushed the boundaries of documentary filmmaking with Darren Aronofsky’s One Strange Rock.  The network has also taken the bold step of melding documentary and drama.  The latest result of this unlikely mélange is Valley of the Boom bowing January 13, Carolyn Bernstein, the network’s Executive Vice President of Global Scripted Development and Production, announced at a luncheon last week.

Sitting next to one of the stars of the series, Steve Zahn, we talked about his bizarre con-artist character, Michael Fenne, which allowed the actor to go over the top.  This series, which takes viewers to the not-so-distant past when the internet was in its infancy, uses documentary interviews with the real people instrumental in developing and launching the web.  Those are woven in with dramatic scenes featuring Zahn, Bradley Whitford (Get Out, The West Wing) and Lamorne Morris (Game Night, New Girl).

In a vast dining hall, one flight up from the indoor pool in what was once Heidi Klum’s living room in a nondescript (from the street anyway) Soho townhouse, a few dozen people dined on Japanese hamachi crudo, salmon, and berries and cream.  They also had a taste of what this very different series will cover.

“It’s not exactly what you would expect to see on National Geographic, which is why Valley of the Boomis a very big swing for us,” Bernstein said.  “One of the world’s greatest innovations was created by a bunch of geniuses.”  Among them is the soft-spoken Stephan Paternot, who while chatting on the terrace before the luncheon explained that he was the cofounder of TheGlobe.com, often described as Facebook before there was Facebook.  (Paternot is pictured at top left with Zahn, Morris and Whitford.)

“I lived the story, but it was sufficiently trippy seeing me,” Paternot said of lookalike actor Dakota Shapiro (The Affair).  “Dakota is uncannily similar.”

Paternot heard through friends in the film industry that Nat Geo was casting for a “Stephan Paternot type” and immediately realized, “This was happening with or without me.  They asked me to come in for a documentary interview and I asked if I could reread my book,” he added.  Although he naturally lived through all of this, the events depicted in the series happened in the early and mid ‘90s and Paternot needed to review his own account.

“As long as we don’t end up in a Turkish prison, I am okay with it,” Paternot said.  “What struck me the most is the timing.  Anyone who helped build the internet knows it has to be reinvented.  We are all experiencing overload with it.”

Telling how the web spread as a straight narrative, whether in dramatic or documentary form, was a challenge.  Even toggling between the real people and dramatic re-enactments was not enough. So showrunner Matthew Carnahan (House of Lies) has Morris consistently break the fourth wall. There’s also an old school hip-hop sing-off in an otherwise staid business meeting.

This, clearly, is not your grandfather’s National Geographic.

As of now, Carnahan, who was seated opposite me and is still ruing not being able to buy a former gas station in Bushwick about 20 years ago (what would it be worth now?), wondered if this would be a one-and-done series or if it would continue.  He created the six episodes so they tell a complete story but, he noted, this could be seen as Valley of the Boom 1.0 and next year could be 2.0.

“The attempt was to make something that set out to be disruptive,” Carnahan said.  “As the innovators, the work they were making, obviously they were geniuses and changing the way we live our lives day to day.  I am not under the illusion that we are doing that.”

The showrunner is the first to acknowledge, “It’s an odd amalgamation -- comedy, music, drama, rap and so on and mixing scripted and unscripted.”

Frankly, dramatizing the browser wars isn’t the sort of topic that makes people automatically break into song, so it made sense for the network to go a bit rogue, to push further.

“It’s a wonderful, provocative and strangely timely show,” Bernstein said, urging everyone to watch the full six hours – which, she noted, is not really six hours because of commercials.  “It has a beginning, middle and end and ties everything together in a messy, complicated bow.”