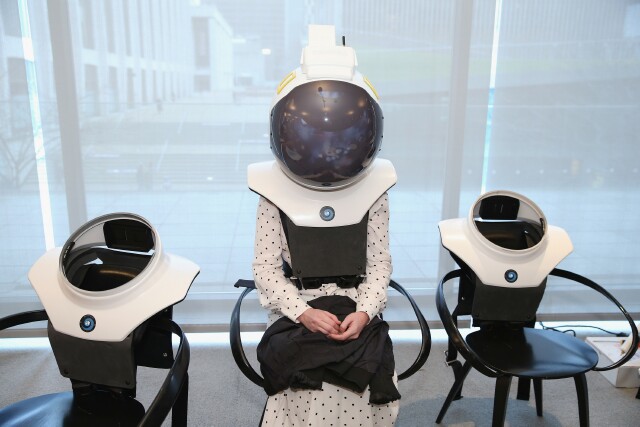 The party was out of this world, yet very much grounded in Manhattan when National Geographic presented a special screening of One Strange Rock, its 10-part series on the marvels of Earth, at Lincoln Center Wednesday night.  Two years in the making, the ambitious production, which premieres March 26, is designed to make viewers see our planet as never before.  To do that eclectic filmmaker Darren Aronofksy and producer Jane Root used footage from remote corners of the world and outer space.

Will Smith hosts the series, and eight astronauts tell the story of Earth from their unique perspective, as they are among the only 556 people to have ever left the planet.  They were superstars in the room, later mingling with the enthusiastic audience of 1,200 after a special screening of scenes from a number of episodes … and the presentation of a fabulous cake (photos of which instantly took Twitter by storm).

National Geographic Television Networks CEO Courteney Monroe took the stage at the start and began her opening remarks in timely fashion.  “With the sad news of Stephen Hawking’s passing, I am reminded again just how important exploration is,” she said.  (Hawking had passed earlier that day.)  “So I thought it would be fitting to begin this evening by sharing a quote from Stephen I find particularly relevant to our premiere tonight.  ‘Remember to look up at the stars and not down at your feet. Try to make sense of what you see and wonder about what makes the universe exist. Be curious.’”

Monroe shared a few of the details that went into making the series and securing shots of Earth’s most extreme climates from rarely seen angles.  Nat Geo shot in 195 locations in 45 countries, on six continents.  Aronofsky had even trained an astronaut to shoot footage from the International Space Station.

“Science is often cherry picked,” Aronofsky later noted.  “Science is not political.  It is a way of understanding our world.  The most exciting thing about this show is the astronauts.  It doesn’t matter how long they go into space, something spiritual happens to them.  Suddenly they are not from Iowa or America.  They are from Earth.”

The crowd cheered during introductions of the eight astronauts:  Chris Hadfield, the first Canadian to command the International Space Station and famous for playing the guitar and singing Space Oddity in space; Jeff Hoffman, an MIT astrophysicist who fixed the Hubble telescope and read Torah on his mission; Mae Jemison, a chemical engineer and physician and the first woman of color in space; Jerry Linenger, also a physician, who heroically put out a metal-melting fire in space; Mike Massimino, who sent the first tweet from space; Leland Melvin, the only former NFL player who then became a NASA astronaut, and Nicole Stott, the first person to paint in space.  The night, though, pretty much belonged to Peggy Whitson.  She is currently the only active astronaut in the group and she has shattered many records including spending the most consecutive days in space -- 665.  (Pictured below, left to right: Jerry Linenger, Mae Jemison, Leland Melvin, Nicole Stott, filmmaker Darren Aronofsky, Peggy Whitson, Chris Hadfield, Mike Massimino and Jeff Hoffman.) 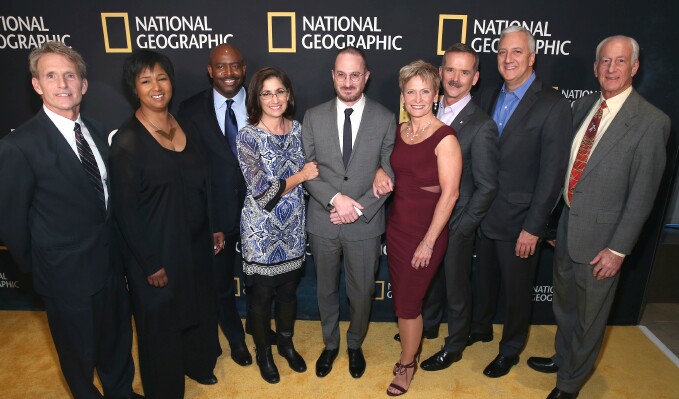 This screening, which wove together highlights from the series, focused on Whitson, who hails from Beaconsfield, Iowa, which in the last census had a population of 15. Among them are her parents.  Whitson, in a plum cocktail dress with mesh side cutouts, told me how touched she was that Nat Geo offered to bring her parents to this premiere and party.  But her dad, who was a farmer, can no longer travel.  When the International Space Station would zoom by her parents would go outside their farmhouse and wave up to their daughter in the fastest moving bright object in the sky.  The series perfectly captures this heartfelt moment of them so proud of their daughter.

Whiting spent the reception after the show just beaming and like the other astronauts, posing for selfies.  Among those filling the hall were students 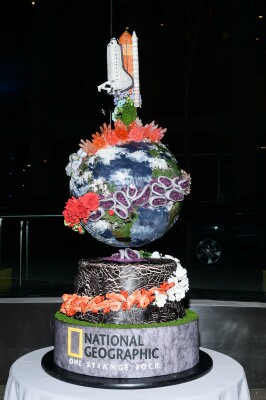 Among the celebs in attendance were Ellen Burstyn (who received an Oscar nomination as Best Actress for her harrowing performance in Aronofsky’s Requiem for a Dream), Erin Richards of Gotham, Fisher Stevens and Megan Boone of The Blacklist, Gregg Bello of Noah, Samantha Mathis of The Strain and Lili Taylor of American Crime.

While just being in the presence of the astronauts was exciting, and there were stilt walkers dressed up as astronauts milling about, the other main attraction of the evening was a gigantic cake of the Earth by City Cakes (see photo).  Chocolate and vanilla with buttercream, the Earth had a rocket made out of sugar and modeling chocolate and rock candy for decorations.

And for the slightly brave there was the virtual experience of a space trip.  Staffers strapped people into chairs and then lowered massive space projection immersion helmets (pictured at top) onto anyone who was game.  Using laser projection, customized optics and built-in audio, the helmets are wide enough so that someone trying one could move her head around and begin to wonder just what it would be like to leave this strange rock.  Created specifically for the series, the helmets will travel to schools and planetariums this spring.