Nat Geo's "Mars": Life on the Red Planet Has Some Seeing Green 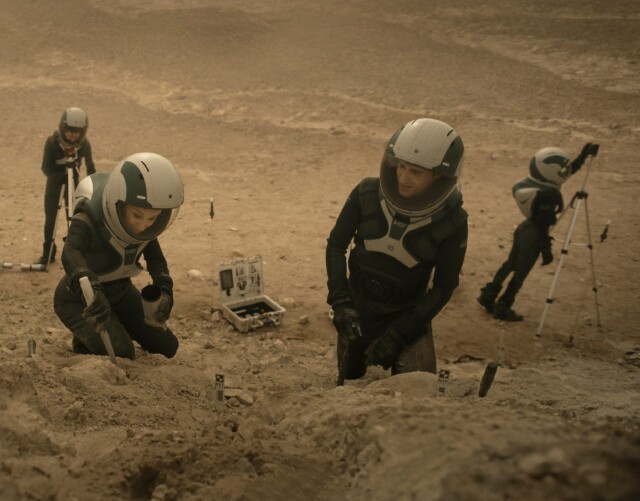 When mankind lives on another planet -- and it is a matter of when, not if -- will the essential characteristics of humans evolve?  Probably not, as suggested by National Geographic’s Mars, beginning its second season Monday, Nov. 12.  The new season picks up in 2042, five years after we last saw the astronauts.  The action has transitioned from a multicultural mission, an arduous trip of getting to the red planet, to a multicultural colony, and the challenges of living there.  The space pioneers have endured deaths, loneliness and misgivings while their physical and mental capabilities were strained to the breaking point.  Yet, they adjusted and survived.

These scientists and explorers are curious and courageous, and what better playground than a planet about which we have some information but not enough?  Mars is the perfect setting for the network’s venture into this hybrid of fact and fiction.  Facts are handled deftly as news footage from today is spliced into the drama of the future.  And this season the drama is amplified with internecine politics, power grabs and love affairs.  Scientists, producers, writers and actors on the series shared with MediaVillage what they were aiming for in this new genre.

“We use another planet to reflect back,” said executive producer Justin Wilkes.  “[There] is a direct connection between the challenges on this planet.”

Such urgent reflection prompts questions about how humans will behave in the near future, whether or not they are living far, far away.  “If we go to another planet will we go and cause the same damage there?” wondered Antonia Juhasz, an oil and energy analyst featured in the series.  "Will we bop around the solar system risking planets?"  After watching all of the series she boiled it down to, “Season one is, will humans be killed by Mars?  Season two is, will the humans kill Mars?” 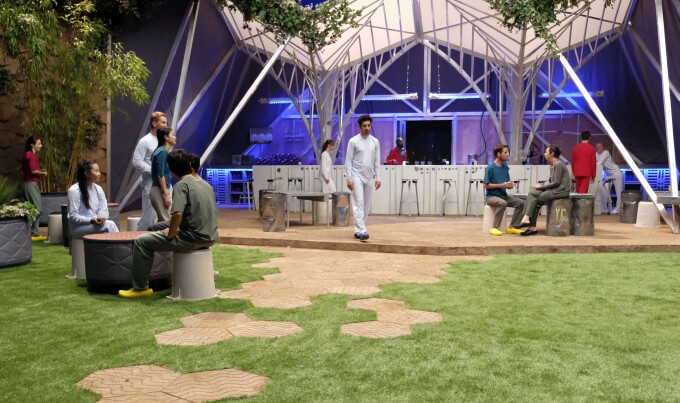 Astronauts from the fictional International Mars Science Foundation (IMSF) do what people do anywhere.  They carry out their assignments, hook up, miss loved ones (who in this case happen to be 34 million miles away) and look for ways to blow off steam.  They build a climate-controlled park with a bar (pictured above) and serve homegrown booze as they forge a way of life humans have never experienced.  Once settled into their new planet, their strange existence is shattered when another rocket arrives.  It’s not part of the government-sanctioned cooperative; it’s from a corporation!

From its aggressive entrance, Lukrum Industries foreshadows what it is and why it is there:  To take whatever it wants.  The name alone is a giveaway.  (It means profit in Latin, though showrunner Dee Johnson said only MediaVillage picked up on her little joke.)  Not knowing that does not detract from the season’s major plotline of pitting commerce against science and weighing the ethics of space exploration.

Lukrum’s swaggering CEO is played by Esai Morales as a sort of smug captain of industry who always gets what he wants – and this guy wants it all.  “He’s a corporate colonist,” Morales said of his character.  “He sees himself as a businessman and adventurer.”

Consider how ugly it gets on Earth when mining companies ravage the land – and that’s with conservation regulations in place.  Then imagine what could happen in a lawless expanse.  Sure, there’s the International Space Treaty from 1967, but it’s a rather toothless document.

“You can’t own Mars,” Johnson explained.  “It’s like international waters.”

Even when IMSF’s Commander Hana Seung (Jihae) is infuriated by Lukrum’s Commander Kurt Hurrelle (Jeff Hephner) and his sense of entitlement, she’s bound by honor and the foundation’s rules to help people in danger.  Lukrum certainly endangers everyone on the newly colonized planet with its recklessness.  While IMSF scientists painstakingly search for water with the gentle touch exhibited on archaeological digs, Lukrum workers detonate explosives setting off a Mars-quake.  Would that reaction be science fiction or fact?

Dr. Mae Jemison, a former NASA astronaut and consultant to the series, said this could absolutely happen as the planet reacts to explosives.  She also pondered what would happen with unchecked profiteering.  “What is it that makes us want to exploit things?” she asked.  “How far do you exploit things?  How brash are you?”

What makes this series so different is the melding of documentary with drama, and this season both are heightened.  As we see Mars get ravaged, news footage shows the result of degrading resources on Earth and the ice shelf melting.  A clip of President Trump calling climate change "a hoax" is included.

“There are parallels between what is going on in space and the Arctic,” noted Stephen Petranek, co-executive producer and author of “How We’ll Live in Mars.”

The charm of the series is that it's not bombastic or confrontational, despite being disturbing as it reminds viewers how much damage mankind has wrought on our home planet.  The drama pulls viewers into the astronauts’ lives, and this season’s arc includes a main character dying, a significant disease striking and an intense love affair resulting in the first Martian – that is, a human baby born on Mars.

To those who have been working on Mars, none of this seems that far-fetched.

“Every day we don’t go we are choosing to not go,” said Casey Dreier, Director of Space Policy at the Planetary Society and a consultant on the series.  “It is a statement of choice as a society.  It is not an impossibility.  We know how to do it, and it's a political problem.  Within the next 30 years, we have a very good chance of doing it."

And when we do, Johnson hopes this season of Mars serves as a caveat.  "The lesson we want them to learn is don't make the same mistakes we did on Earth,” she declared.

Mars is telecast Mondays at 9 p.m. on Nat Geo.