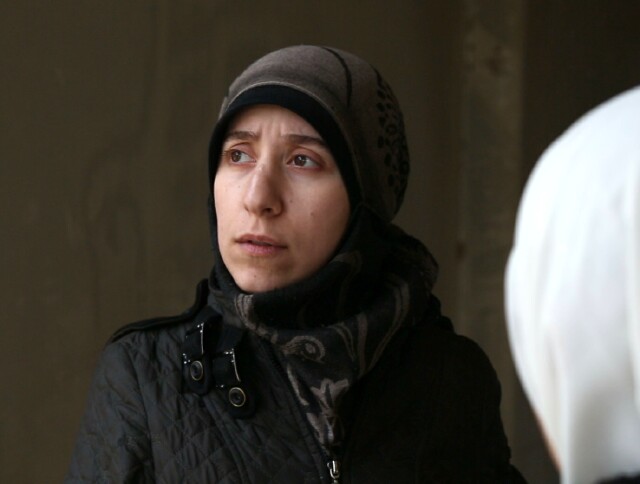 Editor's note:  In her first interview in the United States, Dr. Amani Ballour (pictured above), whose unwavering heroism is the subject of National Geographic's Academy Award-nominated documentary The Cave, speaks with great candor about the destruction of Syria, the plight of its terrified refugees and the tireless efforts of her colleagues to save the wounded in the city she calls home.  This is one of those rare movies that haunts the viewer for months once it is seen.  Of even more importance, it has the power to save lives.  If you think you understand what is going on "over there," you haven't seen The Cave.

As documented by filmmaker Feras Fayyad (also a hero), refugees in Eastern Al Ghouta, Syria, flee until they run out of land, wind up in the sea and drown.  Subjugated women cower as their children starve.  A civil war rages as the regime bombs and gasses its hospitals.  And all the while the world yawns.  Were these plotlines for a feature film, starring a slight woman attending children ravaged by warfare, the screenwriter would be told: “This is too grim, no one will believe it.”

If only it weren’t the truth.

In the midst of this madness Dr. Ballour and her team tend to an endless cycle of wounded men, women and children.  A pediatrician, she was also the manager of the title location, an underground hospital situated in one of the many tunnels that snake beneath the war-torn city.  For two years, director Fayyad followed her, acquiring some 500 hours of footage, now edited into 144 harrowing minutes.  (Fayyad, incidentally, also received an Oscar nomination for 2018’s Last Men in Aleppo.)

National Geographic secured visas for Fayyad and Ballour to attend the Academy Awards and bring further attention to the crucial messages of The Cave.  Ballour spoke with MediaVillage for her first-ever 1:1 interview in the United States.

“I want it to tell the truth,” she said, getting right to the point.

Ballour has no interest in being a celebrity.  She even warned Fayyad he could not interfere in her work and was surprised the film centered on her.  All that concerned her was the larger good of the rest of the world learning about the atrocities in Syria, then acting.

“I wanted to show the struggle of Syrian people, to show that we are civilians,” she explained. “They lie when they say they are fighting terrorists.  We are civilians.”

It’s too mild to label this documentary harrowing.  Harrowing happens in the first seconds when viewers see the remains of Syria.  Bombs detonate.  Again.  And again.

“It really is scary being bombed all the time,” Ballour said in her matter-of-fact manner.  “They use all types of weapons, chemical weapons.  They try to bomb everywhere.  They bombed a primary school with children.  They targeted a crowd of people in shops.  I was scared.  I wanted to support the children who were afraid.  It was very difficult to do that.  We just work and work and try to do everything after one year, two years, three years under siege.  We were [afraid] that we would all die, and no one would see us.”

The relentless bombing rattles buildings long abandoned in this horrific moonscape of a former city.  While little life seems to exist above ground, deep under the pitted streets, the tunnels bustle.  Here, Ballour, preternaturally calm, and her staff make do.  Just being able to say “her staff” is shocking for Syria, where women are told they cannot do pretty much anything.  Ballour has had enough of men bossing her around.  In the film, she tells an older brother to let his sister explain how she came to be bloodied, and Ballour challenges a man who dares tell her she should be home.

She does what she can with what she has.  As much as that is, it is never enough.

“I had hoped that maybe when people can tell the story and see it, they will help us,” Ballour said.  “I want them to document the crimes.  I want this story to help end the siege, end the bombing.  Nine years ago, the revolution started, and the regime started to torture people and bomb people.  Russia and Iran decided to support [Syrian President Bashar al-Assad].  And the international community does nothing for us.  They are just watching, and they are doing nothing.  So, these Russian and Iran and al-Assad regimes continue killing people.” 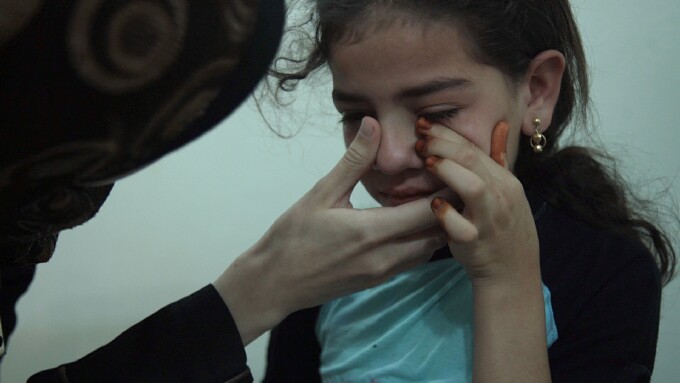 Those barely hanging on stagger or are carried into the Cave.  The camera focuses on Ballour cradling a baby, poking her finger in the child’s mouth and fishing out a chunk of building material.  The injured keep coming.  It is an understaffed, underfunded MASH unit, except the wounded coming to her are often in diapers.

Ballour sets her chin and keeps going, day after impossible day.  And while any frame of this film should haunt anyone with a conscience, she shares with us the account of one boy.

“When I try to help a child, I try to just look at the wound and not the child’s eyes,” she revealed.  “It is very hard to hear the child.  I remember a child, five-years-old. Mahmoud.  He lost his hand in a pipe bombing, and I was his doctor.  He knew me.  When he woke up, he said, ‘You are my doctor.  Why did you cut my hand off?’  And I said nothing.  We try to be strong, of course.”

They are beyond strong, the few physicians suturing wounds and setting bones.  There is no anesthesia, but the surgeon plays classical music.  They have nothing else.  While the doctors piece together bodies, more bombs rain down.

When Ballour ventures from the hospital, it’s to duck gunfire and pay a house call to a toddler whose cancer makes it too difficult for her mother to bring her to the Cave.  Here again these situations sound too wretched to be in a feature film.  And yet, it’s all true.

A nurse, who is also the cook, washes surgical instruments in the kitchen sink.  Somehow, she stretches 11 pounds of rice to feed 150 people and tries to remain upbeat while PTSD has robbed her of any semblance of normalcy.

The film’s lightest moment has Ballour chatting with a colleague about how sparse her eyelashes are.  She admits occasionally experimenting with mascara, but only at night when no one sees it.  That sliver of vanity -- from a woman whose winter coat is her wardrobe -- prompted us to ask one Hollywood-type question since she is heading to the Oscars.  Has she given any thought to her gown?

What she cares about is helping her country.  After chemical attacks and the constant bombing finally forced Ballour to escape, she took refuge in Turkey.  There, she established afundto support female leaders in conflict zones.

For those wondering what they can do, Ballour suggested, “If they believe we are humans, maybe they can talk to the politicians.  People are suffering.  I hope it will make change, of course.  On the humanitarian side, donate to the people in the camps.  Do any single thing they can do.  Just believe we are humans and deserve to live in safe places.

“Stop bombing,” she continued.  “Stop destroying the safe cities.  I hope for more, of course.  I hope to get rid of this criminal, and I hope to get democracy for Syria, but I do not believe that will happen.  I want people just to support the humanitarian side.  They are humans.”

Scarred from the atrocities she witnessed during her six years in the underground hospital, Ballour wants to become a radiologist.  And, she longs to return home.

“I will,” she said with a determination no one should doubt.  “I strongly want to come back.  I am sure justice will be done.  Someday we can rebuild our country.  We need to get rid of him.”

Since the Civil War began nine years ago, an estimated 400,000 Syrians have been killed, and at least 6.7 million have become refugees.  To put such a huge number in perspective, that is roughly the population of Nicaragua.

Ballour pressed her case that The Cave is not merely a snapshot of one dreadful event.

The Cave is available on demand.