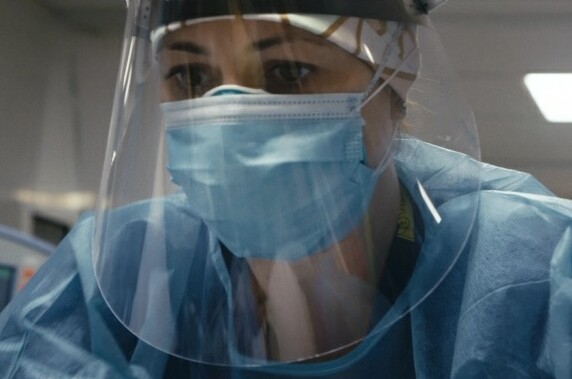 The misery was unrelenting. Exceptionally sick people flooded emergency rooms, and New York City was the epicenter of it all. It was the first wave of COVID. Death not only hung in the air; it was threatening to come for everyone. Now that we flash vaccination cards as quickly as we show driver's licenses, those wretched days are easy to forget. The first shocking months of the pandemic -- when a vaccination was not ready, Andrew Cuomo was a popular governor giving daily updates, and anyone paying attention was terrified -- are documented in a gripping National Geographic documentary, The First Wave, streaming on Hulu December 5.

The documentary had its premiere on Thursday, November 18 -- the final night of the twelfth annual Doc NYC festival – at The Beacon, a magnificent old theater on Manhattan's Upper West Side, where something remarkable happened. The audience gave sustained, multiple ovations to those who most deserve them -- a doctor on the front lines; a nurse and a security officer who recovered; and the filmmaker, Matthew Heineman.

"We have all been changed forever," Heineman said after the screening. "I hope the film creates a space to reflect on what we have all been through."

Sure, it was a friendly crowd; Nat Geo had invited some 500 medical workers, and MediaVillage was among the very few press in attendance. Still, the reaction was beyond loving colleagues. And it was well beyond the sort of reaction documentaries usually receive. It was also applause for how far we have come in such a short time.

Certainly, there were cheers for Heineman, who does a spectacular job with the most macabre subject. He showed the toll of the virus, not just the maps and stats that numb us, but the actual effect on people, how this fast-moving virus killed so efficiently, and how those who swore to save lives gave all they had.

Then, they gave some more.

That seemed so very long ago when Dr. David Battinelli took the stage before the November 18 screening. Battinelli, physician-in-chief of Northwell, put the film in context. So much has happened since we even learned the word COVID; this was necessary. He reminded the SRO audience that Wuhan, China was home to the first infected patient on November 17, 2019. The sprawling Long Island medical center received its first COVID patient in March. Within a month, it had 3,500 more.

"We cared for more patients than any other hospital in the country," Battinelli recalled. "There was literally no playbook." And so the staff wrote one. They not only showed up but performed heroically while, naturally, afraid of bringing this virus home to their families.

It took someone with Heineman's eye to capture the strange panorama of an empty New York -- Washington Square Park bereft of chess players and weed dealers, 42nd Street without skanky street Elmos (not a bad thing) or tourists (and natives trying to avoid those two groups).

In addition to these sweeping visuals, threaded in just enough to remind us of an empty New York, Heineman focused on the most intimate, small moments. A nurse swabs a patient's forehead. A doctor wills herself to leave her comfortable apartment and dog to face another exhausting shift of patients dying. Orderlies tenderly load corpses into refrigerated areas.

If documentaries had stars, this one would be Dougé. A strong, wise woman from the Bronx, the daughter of immigrants does her job, but so much more than that. Dougé makes the calls no one ever wants to make or receive, telling people that their loved one has died despite the staff's best efforts. She listens to them wail. And then she cries. After that, she dries her tears and goes on to tend to another patient.

We see people at their most vulnerable, and while the 90-minute film brims with heart-rending scenes, there is a close-up of an eye that haunts. First, we hear the staff call, "Mr. Ellis." It's likely he heard but could not react. Supine in bed, fitted with a mask that pushed air into his lungs, and attached to a bevy of monitors, Ahmed Ellis, an NYPD schools safety officer, is a bear of a guy. Photos of him from before the illness reveal a man who looks as if he disarms miscreants with a smile more often than a threat.

As the nurses hold a tablet so he can see his wife and young children, Ellis musters his energy. You can feel him trying mightily. The task? Opening his eyes. He is thatsick. Ellis is one of the patients we come to know and root for. Frankly, it seems unlikely he will ever rally. No one, though, gives up on him.

While the exhaustion of the staff is palpable, there are a few bright moments: Firefighters applauding nurses while people hang out windows singing "New York, New York," banging on pots, cheering, sending love to the folks who were doing what no one wanted to do.

The brightest moments are when the staff gets someone off the respirator. They play "Here Comes the Sun," and everyone in scrubs claps. It's the joy of beating the odds. That feeling electrified the crowd when Ellis, Dougé, Heineman, and others featured in the film took the Beacon stage after the documentary.

Alexis Ellis, who works at a hospital, shared why she was willing to have her husband filmed during his worst days.

"When they wanted to film," she began, "I knew they were doing the best they could … but I knew if a camera were in there …"

She let her voice trail off as she flashed a knowing smile.

"I pride myself on being as open and transparent as possible," Dougé said, explaining why she was willing to allow herself to be filmed. "Hearing it from me, who is Black, a woman, a physician. It was a vantage point essential to get the full story."

The First Wave will begin streaming on Hulu on Friday, December 5.