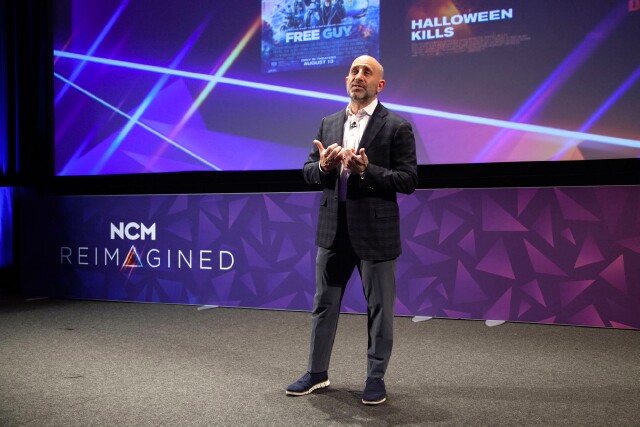 On the afternoon after what has turned out to be the most controversial Academy Awards presentation in both TV and entertainment history, National CineMedia resumed its annual in-person Upfront affair. The aim: invite advertisers to spend more on messages running on movie theater screens prior to the feature presentation. The Upfront site: Lincoln Center's Walter Reade Theater.

The Big Message: With movie attendance back in vogue post-pandemic, thanks to recent blockbusters such as Spider-Man: No Way Home and The Batman, a new 18-34 adult crowd is coming through the turnstiles that National CineMedia executives label "unreachables" -- a crowd whose constituents prefer to not watch TV at all, or if they do, to watch Netflix or other ad-free subscription services. In-theater messages can reach this audience -- if they are not running one after another with movie trailers in a 30- or 60-minute pre-feature package. "Unreachables don't hate advertising," explained NCM Chief Revenue Officer Mike Rosen. "They want advertising on their own terms."

What Worked: The connection of one aspect of the presentation to the next, almost like watching a novel or short story come to life. Good mix of graphics and video clips from current and upcoming movies later this year and 2023. Another welcome point: encouraging commercial placement before non-genre blockbusters, such as dramas and live-action movies directed at families.

What Also Worked: Popcorn, soda, water and some appetizers on hand for attendees to munch on or sip before the presentation. More short bites, including a radish taco with creamy tofu filling, were plentiful during the post-event reception. Bravo to Walter Reade's catering crew.

What Didn't Work: Nothing to report here, because everything worked!

Data Points: Seventy-nine percent of moviegoers at NCM-affiliated theaters are under age 39; 43 percent are multicultural. More 18-34 adults watched Spider-Man: No Way Home during its opening weekend than the Super Bowl! According to NCM-acquired research, viewer recall of cinema messages is three times that of TV commercials. More than 1,600 theaters nationwide, offering more than 20,700 screens, run ads placed by NCM. Participating theater owners include AMC Entertainment (no relation to AMC Networks), Cinemark Holdings and Regal Entertainment Group.

"Spider-Man: No Way Home was a cultural sensation. It re-energized the entire movie experience. There's an incredible movie slate coming over the next two years." -- Scott Felenstein (pictured at top), National CineMedia President of Sales and Marketing

"Isn't it good to be back in a theater with other people? I just ask that no one comes on stage to slap me." -- Tom Lesinski

"The 'unreachables' refuse to watch advertising at home. They refuse to play by the old media rules." -- Mike Rosen

"You want to reach the 'unreachables'? They're coming to the theater week after week … No medium is more engaging than cinema." -- Manu Singh

"By far the [movie] screen is the best canvas for storytelling." -- Perri Nemiroff