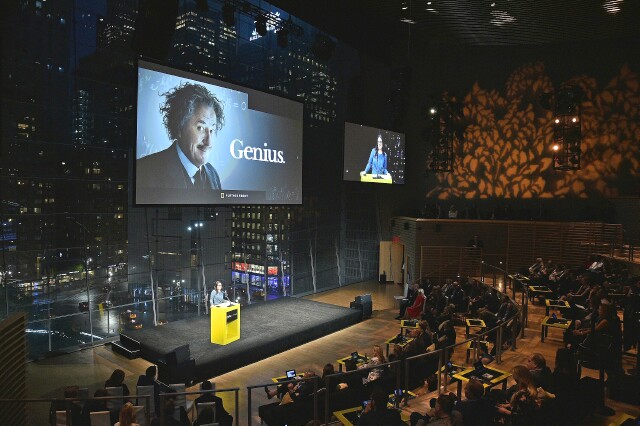 National Geographic proved last week at its FurtherFront just how far it has come in a year.  While staying true to its mandate of bringing the most exotic locales and wildlife to viewers, the network made clear that it has expanded its mission with scripted series, movies and documentaries that tackle social issues as well as those of the natural variety. This has to be the only network that had four astronauts and Hollywood stars at its Upfront and ended its presentation with a photographer Skyping in from his expedition at Mount Everest.

Venue: Jazz at Lincoln Center’s Frederick P. Rose Hall and The Appel Room at Time Warner Center, offering an exquisite view of Columbus Circle and Central Park. On a stage were four period costumes from the network’s first scripted drama series Genius and an exhibit of what someone’s face would look like were it drawn in Albert Einstein’s handwriting by a robotic arm. Fittingly for National Geographic, stars did their step, pose and repeat on a yellow carpet. High-resolution photographs, lit from behind, graced pillars. On the walls, breathtaking shots by National Geographic photographers were brought to life by using iPads with augmented reality. The result: A photo of a whale suddenly became a behemoth charging the viewer! Grade: 4.5 Jacks

Presentation:Morgan Freeman’s stentorian voice announced, “After 129 years of exploration, we have found that all you really need as an explorer is curiosity. It’s for every one of us. We are all explorers.” That theme of pushing forward while embracing the magazine’s origins continued throughout the evening. “This 129-year-old brand is now a 1-year-young company,” declared 21st Century Fox CEO James Murdoch. 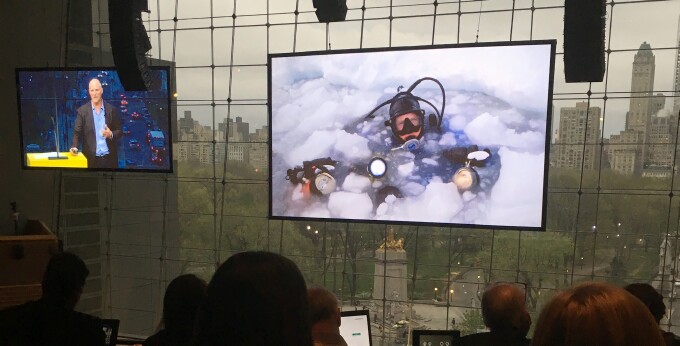 During the concise presentations that followed, the audience had views of Central Park West as twilight, then night, fell. iPads at the tables, where the audience sat, were on a loop showing the sort of photos that compel people to collect years of the yellow-bound magazine.  One of those photographers, Paul Nicklen (pictured above), took the stage and announced, “This is my office” as a photo of him, submerged in ice with equipment streaming about, flashed on a huge screen. National Geographic Global Networks CEO Courteney Monroe took center stage to remind everyone that last year she unveiled the network’s new vision. Since then, she noted, Nat Geo took viewers to Mars and examined the meaning of God. “In a word, we went further,” she said. Grade: 5 Jacks (Pictured below, left to right: Declan Moore, CEO, National Geographic Partners; James Murdoch; Courteney Monroe; Randy Freer, President and COO, Fox Networks Group, and Peter Rice, Chairman and CEO, Fox Network Group.) 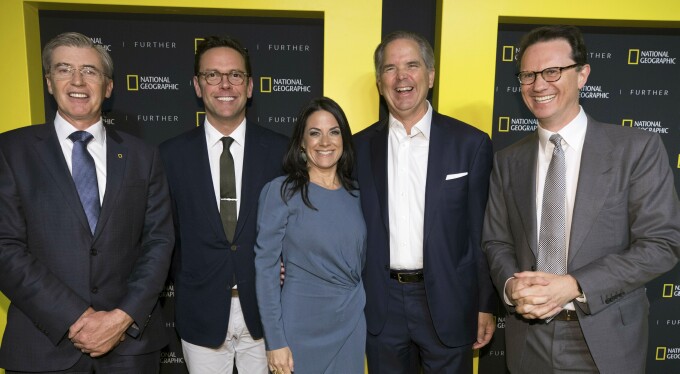 News:  After the success of The Story of God, Freeman announced his company Revelations Entertainment will be doing The Story of Us, in which each hour will touch on a single topic: love, war and peace, power, freedom and belief. (He is pictured below with Revelations Co-founder and CEO Lori McCreary.)  Jay Z and Harvey Weinstein, Co-Chairman of the Weinstein Company, are partnering on a six-episode doc series, tentatively entitled Race. The series will be a mix of animation, documentary and archival footage. Mars, the network’s mélange of science, documentary interviews and a drama partially set in the near future, will return for a second season, as will Genius, which kicks off this Tuesday. Next season’s genius, though, was not yet revealed. 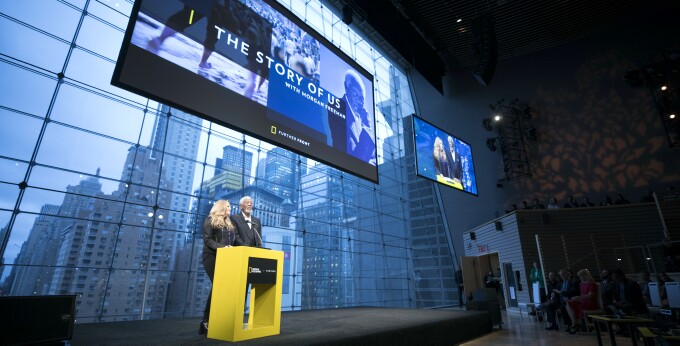 Katie Couric, who jokingly coughed to mask just how many Upfronts she’s been through (the number did start with 30), said she’s never seen anything quite like this one. The veteran newswoman will have a six-episode doc series on the network, though details weren’t divulged.  One of the upcoming tentpoles, the 10-epispode One Strange Rock, “will be Cosmos meets Planet Earth meets Gravity – on steroids,” Monroe said. Breathtaking footage was shown from inside a volcano at 11,500 feet and lava spewing forth at 60 mph.

“As the wife of a vet, I am always personally drawn to stories about the brave men and women in our military and their families who sacrifice so much,” Monroe acknowledged, introducing The Long Road Home, a series set during the Iraq War in 2004.  ABC journalist Martha Raddatz wrote the bestseller upon which it’s based and said this story affected her more deeply than any other she has covered.

Hosts:  No official host held court. Rather it was so tightly scripted that one person followed the next seamlessly. Grade: 5 Jacks 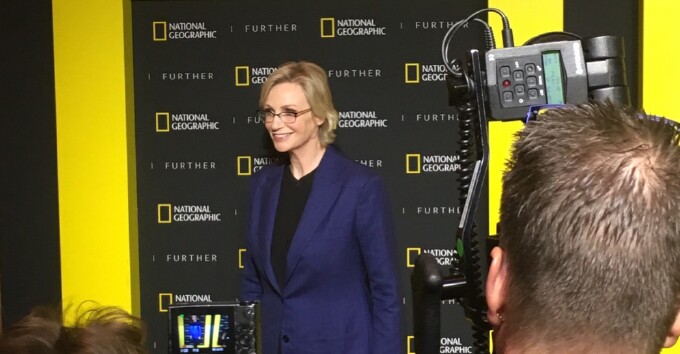 Innovative Opportunity:National Geographic, the No. 1 brand on Facebook and Instagram with 760 million hits a month, combining viewers, readers and online fans. The network’s Further Community is working on harnessing this social reach for the network’s partners. Grade: 4.5 Jacks

Overall Grade: 4.5 Jacks  Excellent job from start to finish proving how National Geographic has revised itself and is moving from strength to strength.

Next up: Complex Networks