NBC's "Annie Live" Was a Musical Marvel for All to Enjoy 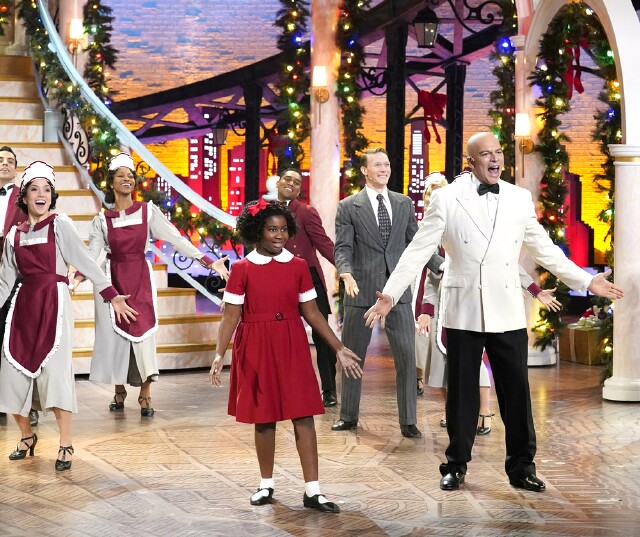 The classic story of Annie, the scrappy but loveable New York City orphan, has stood the test of time, from page to stage and silver screen to television and back. In the beloved musical's past, stars such as Carol Burnett, Andrea McArdle, Kathy Bates, Audra McDonald, Victor Garber, Sarah Jessica parker, Jamie Foxx, Tim Curry and countless others have starred in the various adaptations of the story. (Yours truly even played the butler Drake at the Downtown Cabaret Theatre in Bridgeport, CT!) Some may think this Depression-era musical has been done to death, but NBC's Annie Live! – its sixth live musical production in as many years -- breathed new life into it with its star-studded cast, stunning choreography and production designs and an incredible performance at center from newcomer Celina Smith as Annie. MediaVillage was invited to attend the final dress rehearsal. Here is our review.

Surrounding star Celina Smith were crooner Harry Connick Jr. as billionaire tycoon Oliver Warbucks, Nicole Scherzinger as his secretary Grace Farrell, Taraji P. Henson as the scheming Ms. Hannigan, Tituss Burgess as her equally conniving brother Rooster, Megan Hilty as his girlfriend Lily St. Regis, and Alan Toy as President Franklin D. Roosevelt. Toy made history as the first actor with a disability to play the role, the same disability that affected FDR during his Presidency. This group of TV stars and Broadway veterans were by far the most diverse cast ever attached to Annie, with nearly half of the principal roles performed by actors of color. 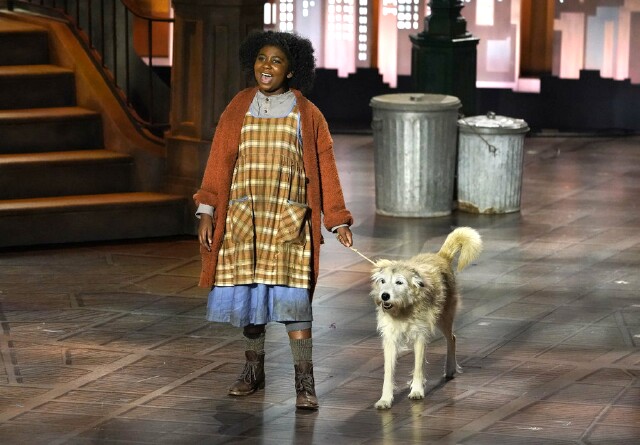 Starting off the show with great humor, 110% energy and show-stopping performances were the orphans who sing and dance their socks off in the classic introductory number "It's The Hard Knock Life" -- with a particularly adorable performance from Felice Kakaletris as the youngest of the group, Molly. Young Smith, who was cast as Annie after a nationwide talent search, portrayed the rambunctious little girl with a wonderful balance of toughness, vulnerability and optimism. It was truly star-making performance. Keep an eye on this young performer. You'll see her again soon. I'm sure of it.

We've been aware of Taraji P. Henson's vocal talents way back in 2005's Hustle & Flow. But as we know, singing in a film versus a live musical is very different, and Henson did not disappoint. Her performance harkened back to those of classic comedy queens like Lucille Ball, ending some of her already hysterical lines with a mean mug toward the audience, earning a big laugh every time. Henson's physical comedy elevated the larger-than-life character who just wants a wealthy man to sweep her off her feet. Her show-stopping moment was "Little Girls" in act one and her chemistry with her on-stage brother Rooster, played by the phenomenal Tituss Burgess, was impeccable. It wouldn't be a true Burgess performance without some swelling high notes hitting the rafters, and he certainly delivered at the end of "Easy Street" alongside marvelous Megan Hilty (a last-minute addition to the cast, replacing the originally announced Jane Krakowski who had to drop out of the project after a breakthrough bout of COVID-19). 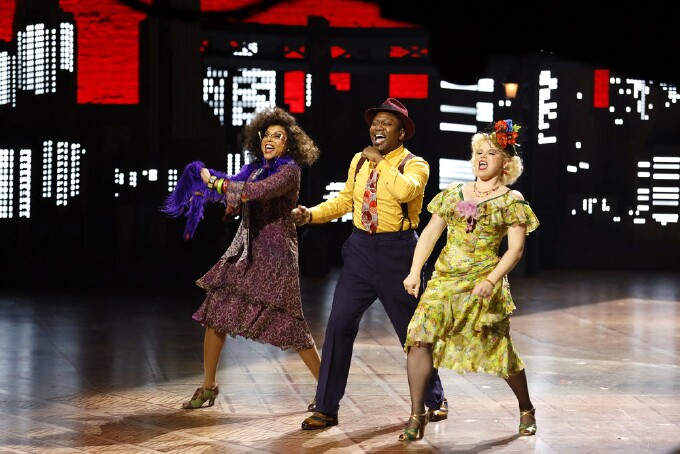 A veteran of stage and screen, Hilty has been much-missed by musical fans, as she hasn't been seen in one since the 2012 Encores production of Gentlemen Prefer Blondes, where she once again channeled her Marilyn Monroe, just as she did in her first major role in NBC's musical drama Smash.

Nicole Scherzinger, unsurprisingly, more than held her own as a total triple threat in a warm and charismatic performance as Grace Farrell. She brilliantly balanced her soaring soprano and powerhouse vocals in "I Think I'm Gonna Like It Here," harkening back to her pop star days in the girl group The Pussycat Dolls.Her dance skills were showcased alongside the ensemble in "We've Got Annie," a number added to the Live production from the 1982 film adaptation. 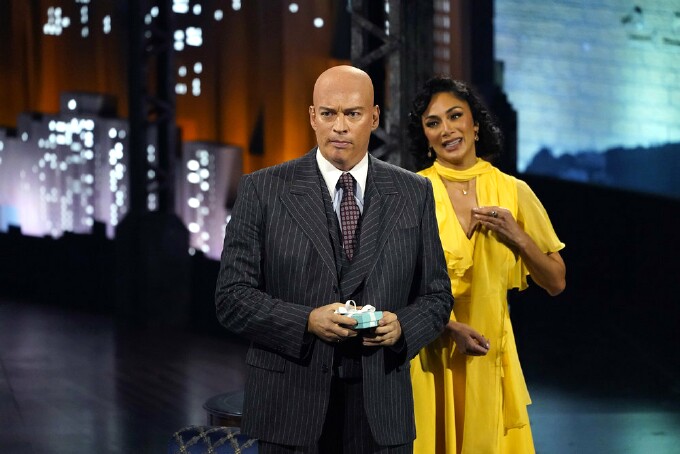 Harry Connick Jr. did what he does best, crooning classic Broadway tunes like "NYC" and "Something Was Missing." He also played piano during the latter song, tapped and shuffled along with Warbucks' staff and shared some subtle but sincere romantic moments with Scherzinger's Grace. During one of the breaks at the dress rehearsal, Connick Jr. gushed to the audience about the ensemble, lauding them as "some of the most talented singers and dancers I've ever worked with."

The ensemble, made up of over a dozen Broadway veterans, brought tons of energy into the Depression-era musical, from the back-flipping butlers and twirling maids in "I Think I'm Gonna Like It Here" to the total show-stoppers "We'd Like To Thank You, Herbert Hoover" and "NYC." Thanks to Stephen Oremus' music supervision and orchestrations, the ensemble was given more time to shine in extended dance breaks in nearly every group number, choreographed by Tony Award-winner Sergio Trujillo. Combined with vibrant costumes from Paul Tazewell and majestic scenery from Jason Sherwood, Annie Live felt like a full-on Broadway show.

One more thing. Moments before "NYC," Warbucks suggested that Grace take Annie to see a Broadway show, originally scripted to be a trip to the movies. Warbucks says, "It's so good to see Broadway back on its feet after such trying times," referring to the Great Depression, of course … but it's no secret that the Broadway community was hit hard by the nearly 18-month COVID shutdown. The invited audience roared in applause, all fans of the theatre, no doubt, happy to see Broadway shows and productions like Annie Live back just in time for the holiday season. 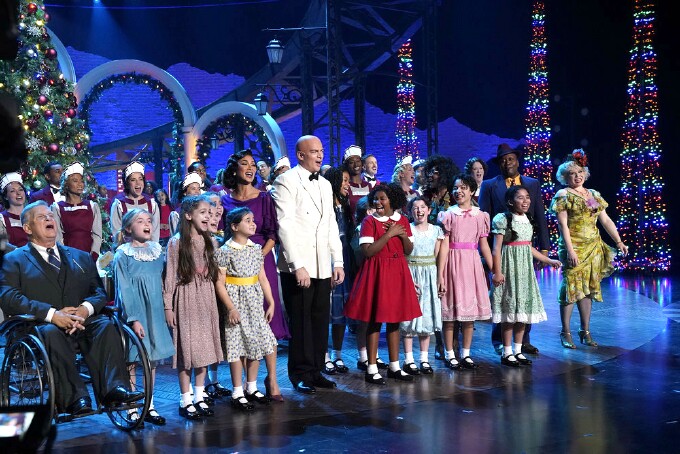