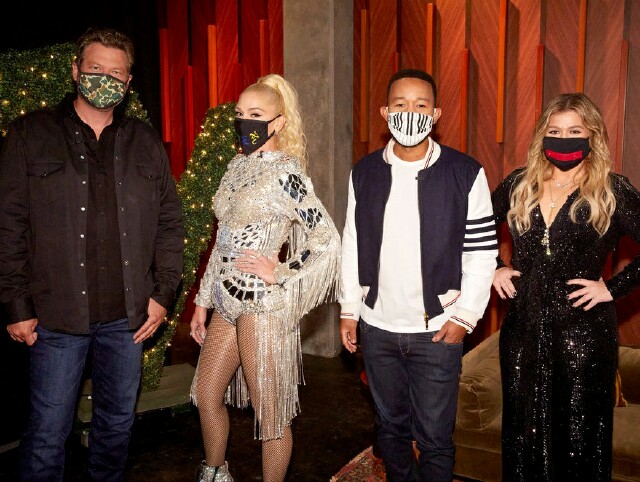 Beginning this week, superstars Blake Shelton, Gwen Stefani, John Legend and Kelly Clarkson (pictured above, left to right) are at it again, battling one another on NBC's The Voice as they attempt to lure some of the country’s brightest new musical talents to work with them. There are tough safety protocols in place, as is true of all new and returning shows currently in production, though the team behind this one had a warm-up last spring, when many productions in mid-March of 2020 (including The Voice) were hit hard by the COVID-19 lockdown. Producers scrambled to quickly devise innovative ways to complete last season’s live shows, relying on "virtually" every technological device at their disposal. In doing so, they created a blueprint for what is now known as "pandemic production," one that longtime executive producer Audrey Morrissey continues to utilize.

"This season is pretty much the same as the last," she revealed during a Zoom call to promote the new season. We're following a really similar pattern. We have teams of 10 [contestants], so we have a little bit of a shorter window. We have the block. We have the steals. We have the save, and there will be a four-way knockout, ultimately, like we did last year. So, it's pretty much following last season, where we're just trying to grapple with producing the show that we all love amid COVID. That really has been the new thing to the format, and it's certainly been a new thing for us."

Given the change in look and feel to that of a regular season, The Voice will not shy away from the impact the pandemic has had on some of this season’s contestants. Some, once gainfully employed in the music business, will have the chance to share stories of how their rising careers were derailed by COVID and turned to the show for another shot at success.

With the behind-the-scenes hustle and bustle of making the show now in comparatively low gear, producers have introduced innovative ways for the coaches to include television audiences. For example, "coach-cams" will reveal their backstage antics. Out front, the coaches themselves have devised ways around the congratulatory hugs once awarded to new team members, opting for "creative handshakes" and new ways to maintain social distancing. All of this is appreciated by the contestants, who are unable to have the usual large family gatherings nearby to offer support.

Virtual audiences have become common place on talk and competition shows since COVID-19 hit and social distancing became a part of life. Incorporating a virtual audience into The Voice’s blind auditions (renowned for relying on the audience's reaction to performances) is new to the show and was a concern. "We gave it a lot of thought," explained Morrissey. "We spent a lot of time thinking about how [it] would be for the artist singing to kind of feel naked out there [without] the crowd and that feedback to help lift them up and carry them through.

"When we thought about this season, we [wondered] 'How do we make it comfortable for them?'" she added. "We did the best we could. We're adults that were dealt a hand of cards. We fought really hard to ensure that the band was physically there because that was even a question at one point. But what was absolutely shocking was that the music -- and the singing -- was incredible. The coaches commented that they felt they could hear the singing better, which makes sense because they didn't have the audience [noise]. This was something we were hyper-concerned about, [but] it ended up not being a problem."

Another thing that had to be taken into account was a contingency plan in case a coach, a member of the crew, or a contestant falls victim to COVID-19. "Fortunately, for us, we've gotten through pretty much the whole season, except for the live shows," Morrissey said. "We got through it by being absolutely vigilant about safety protocols and testing religiously.

"We had talked about a few different scenarios, [but] the truth is we never put one into place because we didn't have to," she added. "We had a few thoughts about moving into the live shows, but I think it's just going to be the same as if somebody was unable to physically be there. It would all depend on how sick they were. We’ll obviously do everything in our power to keep the show going, and if somebody had to come in instead [as a replacement], we’ll figure that out."

With no immediate plans to open the show to a live audience, Morrissey is hopeful the current precautions being taken will ensure a safe season for all – one that, albeit different, still feels like The Voice. "We're doing everything in our power to be the show that everybody has loved and will continue to enjoy," she said in closing. "That's our main focus!"

The Voiceis telecast Mondays and Tuesdays at 8.p.m  on NBC.