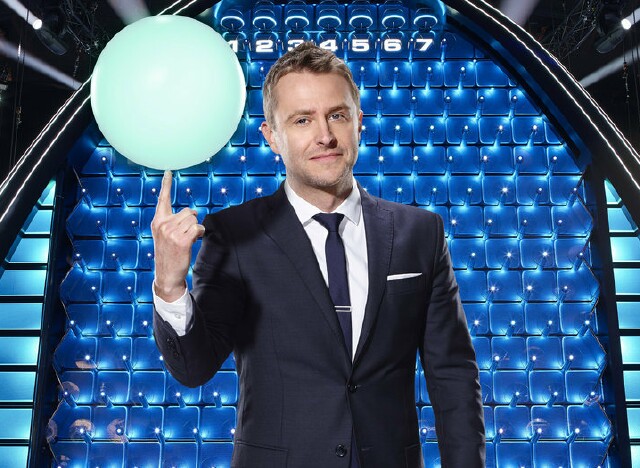 The words “the wall” have been at the center of much controversy during the last two years, thanks to the long campaign of President-Elect Donald Trump. But when it comes to NBC’s new fast-paced game show of the same name, show host and co-producer Chris Hardwick wants to make one thing clear. “This is an inclusive wall!” he cheers, adding that he is “so very happy about it!”

In a time where talk of a “wall” has divided the country, Hardwick is happy to put a positive connotation on the term and, hopefully, enrich the lives of the show’s contestants. “This wall gives people good things,” he laughs. “I feel like what's happened culturally lately is this sort of age of cynicism. There's so much mean stuff in our culture now, so to have something that by the end of it, you feel good or you feel sad or you just feel empathy, I think it's really nice and really important. [Also] we want to give away as much of NBC’s money as possible.”

Billed as “the fastest and simplest game,” The Wall promises to change contestants’ lives, and with more than $12 million up for grabs every night, this game of chance delivers -- chance being the key word. The show’s premise is relatively simple (although the mechanics of the game can be complex). A team of two answers questions as three balls cascade down a wall. If the answer is correct, the balls turn green and a dollar amount is awarded depending on where the balls land. If the answer is wrong, the balls turn red and the amount is subtracted; all culminating in a single determination as to how much, or how little, a team walks away with.

All Hardwick needed to see was five minutes of the action packed game before signing on. “I came in, saw a run-through and in the first five minutes I was shouting [at the wall],” he tells me. “It was one of the most emotional journeys that I've ever had on a job and I said, ‘I absolutely want to be a part of this.’” Of course, many of Hardwick’s TV duties can be described as “emotional journeys.” As host of AMC’s live talk show Talking Dead, which runs after new episodes of The Walking Dead and Fear the Walking Dead, Hardwick he is often somewhat emotional, at least 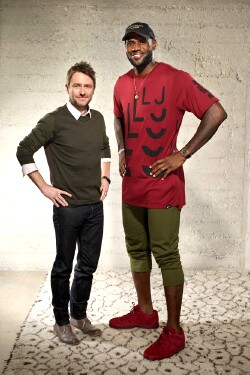 when a beloved character has become zombie food or been otherwise butchered on those shows, which is almost all the time. Conversely he can be downright giddy when hosting the late night Comedy Central game show @midnight.

It was the same kind of emotional reaction that Hardwick had to the game that drew co-producer and basketball giant LeBron James to the project. (Hardwick and James are pictured at right.) “I just thought it was so authentic and emotional,” he tells me. “The show is about regular people who have an opportunity to change their lives in one second. I think that's so incredible. I'm a kid from a small town in Ohio. I wish we had an opportunity like that.”

For the super-busy Hardwick, who also hosts AMC’s Talking Saul (after fresh episodes of Better Call Saul) and continues as CEO of Nerdist Industries, hosting The Wall is a far cry from his long-ago gig as host of the MTV game show Singled Out in the ‘90s.

“I don’t know if Singled Out was full of really great people who deserved a chance,” he laughs when quizzed about comparisons to The Wall. “We didn’t really give away any money. It’s funny, Singled Out seemed so raunchy at the time but by today’s standards it’s like a grandparent show. I can say with 100% certainty there are zero parallels between Singled Out and The Wall – except Singled Out had a tiny little wall with categories on it -- so there was an actual wall.  That’s the only thing they have in common.”

Hardwick’s “single” days are far behind him in more ways than one.  He married longtime girlfriend Lydia Hearst in August of this year.  He believes that, given a chance at tackling The Wall, he and his recent bride would clean up. “Lydia is great,” he says. “[She’s] competitive and I feel like I’m good with trivia. There’s a little bit of the ‘mind melt’ going on with us and if we get to make more [episodes] I think we will try it, just to see what it’s like to actually play the game as contestants.  It could be really risky because I feel it taps into a part of human nature that people would be super emotional about, even if there were zero dollars involved -- just the game element of it. Then you throw that kind of life-changing money on top and it gets really intense.”