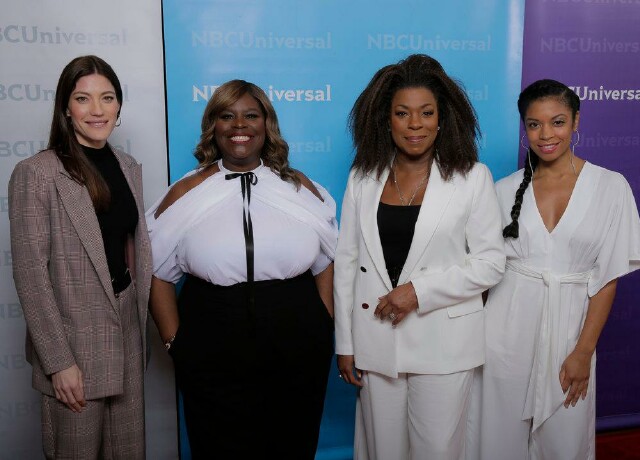 Pasadena, CA:  NBCUniversal yesterday kicked off the Winter 2019 Television Critics Association tour, once again (to the consternation of TCA members) choosing to not include an opening session with one or more top network executives.  Panels with past NBC network chiefs -- from Brandon Tartikoff to Jeff Zucker to Bob Greenblatt -- were always highlights of TCA tours, often establishing the narrative for the network’s day.  Now, the “narrative” is left to the press, which may or may not work to the company’s benefit, as the day is a mash-up of new and returning NBC series and one or two series from a few of NBCU’s cable networks. No narratives for them, either.

At the beginning of the first panel, titled “Women in Drama” and featuring (pictured above, left to right) Jennifer Carpenter (The Enemy Within), Retta (Good Girls), Lorraine Toussaint (The Village) and Susan Kelechi Watson (This Is Us), a question was asked about #MeToo.  The critic wanted to know the panelists’ thoughts about the appointment of “intimacy coaches” to assist while actors are filming “tender moments.”

“I’ve done some intimate, revealing scenes late in my career where I felt vulnerable,” Toussaint replied.  “I’m glad to hear of intimacy coaches because I've been my own advocate.  Part of the #MeToo movement is empowering us to be our own advocates.  We're educating men and [women].  The greatest part of it is many men didn't even know that [some behavior] was inappropriate or offensive [because] it has been so commonplace.”

“Last season [on Good Girls] when everything started coming out, we had male guest stars ask us questions,” added Retta.  “So, the big difference, for me, is that everybody is aware because we're hearing it so often.  They know what’s going on in the industry, but to specifically have men asking us what we have dealt with … I think they just wanted to know what more and more women have experienced.  They're like, ‘How did they think they could get away with this?’”

Behind the scenes, sensitivity training is happening on sets like This Is Us.   “Everyone had to attend a meeting to discuss what was appropriate behavior,” revealed Kelechi Watson.  “I wasn’t aware of anything inappropriate on our set, but I became hyper-aware and started asking, ‘Was that okay’?”

Looking at the panel of predominantly African-American actresses, many playing strong leading roles, it was apparent how far television has come regarding diversity.  “You wait long enough in the night and the sun will rise,” offered Toussaint in response to a question about the panel.  “We are experiencing a renaissance for women, and for women of a certain age.  Oftentimes we get more interesting as we age.  Just look at the diversity of this panel.  It makes shows better to have a cross section of these United States, and on The Village we have so many races and orientations.  It’s the world we live in.  Cable woke up a long time ago, and now network television has, too.” 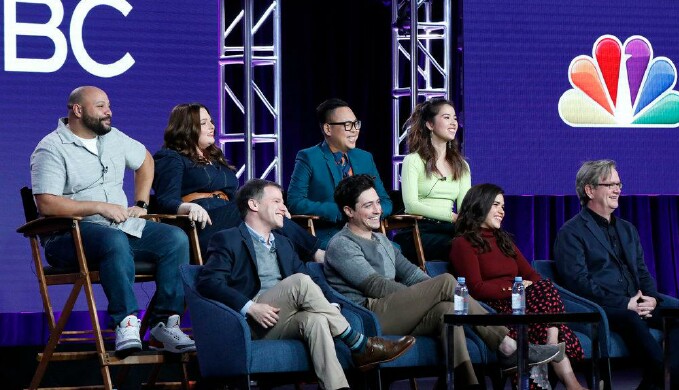 In a session for the long-running comedy Superstore, cast members and producers (pictured above) addressed their commitment to topical issues, delivered weekly, pre-Trump and throughout his presidency to date.  “We haven’t changed the way we write the show, and there may have been one line about Trump,” said executive producer Justin Spitzer.

“I think more and more people are looking for conversations that feel in any way honest, authentic and sane about what's happening in the world around us,” offered series star America Ferrera.  “Justin and the rest of our writers so masterfully are able to address those things without it feeling like they're picking a side or saying who's wrong or who's right.  One person said [the show] restores your faith in humanity and I agree.”

The panel also reflected on some of those “crystal ball” moments that have occurred over its four seasons. “We shot an episode about this crazy blizzard and now it’s freezing in the Midwest,” said Spitzer.

It was Lauren Ash who had the critics laughing.  “There was an incident of someone being trapped in a wall who died peeping into the women’s bathroom,” she recalled. “We did it and like two weeks later it happened in real life.”

The cast of NBC’s upcoming comedy Abby’s (set in an outdoor, backyard bar) expertly navigated the comparisons to their show and another NBC classic, Cheers.  “It’s been 35 years since that show premiered,” said co-star Neil Flynn.  “Apart from a bar, there are no similarities, but any comparisons to that show we’ll take.”

“I grew up watching Thursday Must See TV so being on after Will & Grace… my ten-year-old self is thrilled,” said series lead Natalie Morales.  “I’m the first Cuban/American to be a series lead since Desi Arnaz -- and that was in black and white.  “That’s why I thought this might never happen.”  Add the fact she’s playing a bisexual woman and Morales hit the diversity jackpot.  “I think it's the first time there's been an openly bisexual lead character on network TV,” she said.  “She may date women, but she also dates men.  Big deal.  We are all multi-faceted people who can be more than one thing.”

During the cable portion of NBCU’s day, Bravo unveiled Season 16 of Project Runway, which is returning to its home network and has undergone a few alterations in the process.  The series will be more interactive, including a digital pop-up show that will allow viewers to purchase designs after each episode is telecast.  It will also see the return of Season 4 winner Christian Siriano, who takes over mentor duties from Tim Gunn, while hosting duties go to supermodel Karlie Kloss.  “I grew up watching the show, so I am honored to be a part of its next chapter,” she told reporters.  “So much has changed in the fashion industry. This new iteration keeps a lot of what people love, and this season we are excited about the evolution of the conversation that is happening.”

It was Heidi Klum’s suggestion to hire him.  “Tim was never a designer, he was a teacher,” said Siriano.  “This is the first time we have had a real designer in the role.  If anyone could give advice it’s me; I won the show and built something afterward.” 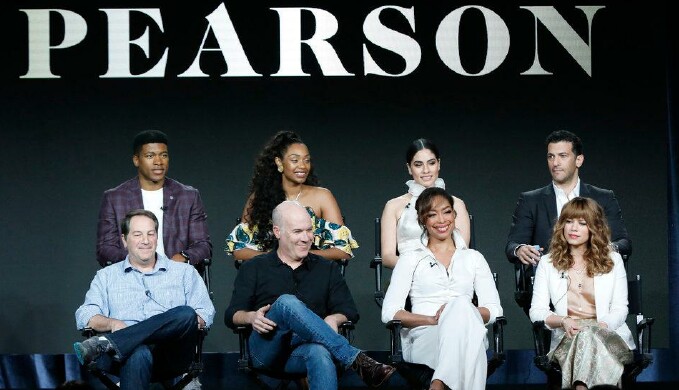 USA devoted its segment of the day to Suits spin-off Pearson, in which Atty. Jessica Pearson, played by Gina Torres (above, bottom row, second from right), moves to Chicago to reconnect with family and to take a new job in the mayor's office.  Reinforcing the narrative of the day, Torres also serves as co‑executive producer.  She's thrilled to be a part of the movement happening at this moment in time.  “We'd be silly to think that this isn't a movement,” she said.  ”More women are coming to the fore and taking their power and are comfortable in taking their power and taking their space.  You can call it a natural evolution.  But it's happening.” 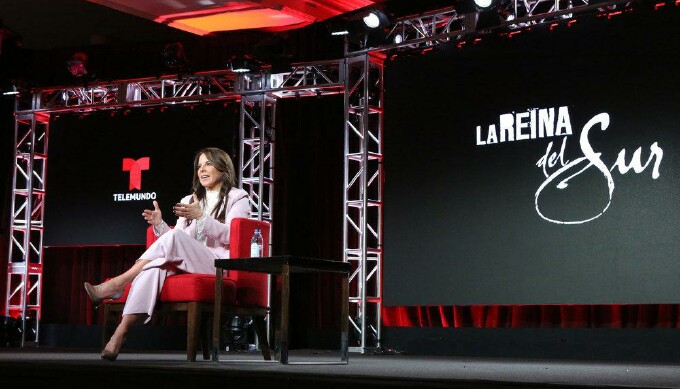 Telemundo brought out Kate del Castillo (above), the star of the hit series La Reina del Sur.  Her character "was one of the first heroines that was really an anti‑heroine," she said.  "She's a woman who is flawed, and we hadn't seen that, at least not in Spanish‑speaking television.  So that made a huge turnaround.  After La Reina we started thinking of Spanish‑speaking television in a different way.  They started to do a lot of women‑empowering TV series with strong leading ladies." 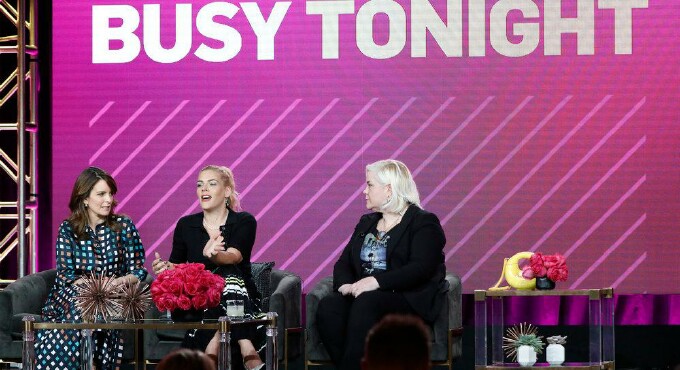 E! capped the day with another nod to female empowerment – a panel for its new late-night talk show Busy Tonight.  Host Busy Phillips, (above, center) executive producer Tina Fey (left) and showrunner Caissie St. Onge took the stage as samples of Phillips’ signature margarita were distributed to the room.  Phillips thanked E! for allowing her show to find its footing and said she took its time change from 10 to 11 p.m. as a vote of confidence.  “It’s been a pleasure working with these guys,” said Fey.  “When [Busy] pitched this idea to me years ago I was like, ‘Yeah, I’d watch that.’”

“We wanted the show to be a little treat for viewers at the end of the night,” Phillips said.  “I was sick of watching Friends reruns every night before bed.  I’ve seen them all so many times I have them memorized.”  For Phillips, pushing girl power was paramount in doing the show.  Not having a female showrunner would have been “a deal breaker."

Steve Gidlow has written about television and pop culture since 1994, beginning in Australia. Since moving to Hollywood in 1997, Steve has focused on celebrity interviews for the weekly market. He has been a contributing editor to In Touch Weekly, Life &…