NewFront News and Views: A 10th Anniversary Spectacle from YouTube 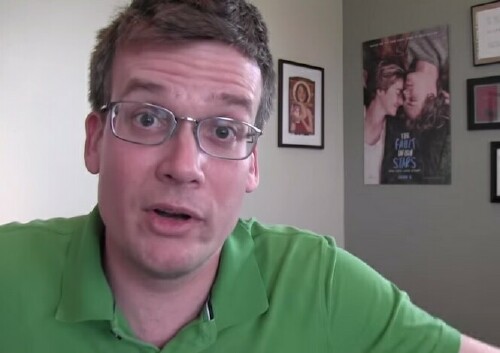 Venue: Madison Square Garden Theater near Penn Station, the second straight year for Google's annual YouTube Brandcast. As 2,400-plus people filed in, an enormous backdrop showed computer-generated artwork of various YouTube personalities surrounded by fans. In fact, the "fan" theme started 90 minutes before MSG opened its doors, thanks to a special "Fan Fair" at Moynihan Station's Skyline space. With an orange carpet outside, fans were invited to see and play games with some of their YouTube faves. A number of fans went to MSG and sat in the first three rows. Everyone could take flavored popcorn and pretzels to their seats. Grade: 4.5 Jacks

Presentation: Few get as spectacular and maintain interest over two hours as this one. Starting with a YouTube 10th anniversary commemoration involving live narration and musicians, video montages and the Harlem Gospel Choir singing Imagine Dragons' hit "I Bet My Life," the energy and variety of material didn't let up, whether from YouTube CEO Susan Wojcicki and her executive associates, content creators (including Tyler Oakley) or guest performers, including Nate Reuss and superstar Bruno Mars (whose performance of megahit "Uptown Funk" -- candidate for top 2015 Upfront/NewFront favorite song -- knocked everyone out). A few talking points Wojcicki and content chief Robert Kyncl raised had an afterlife. "(We) now reach more 18-49-year-olds on mobile alone than any cable network," Wojcicki said to great applause. (Nickelodeon refuted that claim the next morning with its own statement.) Kyncl predicted that by 2019 the majority of ad-supported video will be "delivered on mobile devices or mediated through them," spurred on by multichannel cord-cutting. Speaker after speaker emphasized the vastness and engagement of YouTube's reach, or the unique way advertisers can appeal to its users, whether Under Armour's short films on female athletes or Universal Pictures revealing everything people wanted to know about recent movie “Unfriended.” Grade: 4.5 Jacks

News: Zero. Nothing about content creators on the rise people should look out for. Nothing about YouTube's move into scripted content, by forming a new unit devoted to scripted a few months ago. No remarks or videos from a notable personality getting involved with YouTube this summer or beyond. With a two-hour presentation to work with, couldn't at least 5-10 minutes be used to give 2,400-plus attendees some idea of how its second decade will go? Grade: 0 Jacks

Host: Each portion had a different host, and of them, just one -- BuzzFeed Motion Pictures chief Ze Frank -- didn't hit the mark. (Frank sidetracked a number of times, making some folks in the crowd noticeably restless). Another guest – “The Fault in Our Stars” author John Green (pictured at top) -- hit huge with what may prove to be the most eloquent, moving statement made at an Upfront/NewFront event this year. Green warned that advertisers risk losing the allegiance of a generation if they don't participate in content out to educate, inspire or engage them. (Green and brother Hank -- known as the Vlog Brothers -- produce several YouTube series, including “SciShow” and “CrashCourse.”) Creators of such content increasingly turn to other avenues of support, including viewer donations and merchandizing, Green said. "Less than 20 percent of our revenues come from advertising, and that percentage shrinks by 5 percent every year," he added. "Many of the strongest communities, and much of my favorite content in online video, is frankly undervalued by advertisers ... and they're thriving! You may not see that success, but it's happening ... We adults who criticize this generation for its apathy and narcissism are watching ‘CSI: Miami’ and ‘The Blacklist’ and congratulating ourselves for our intellectual sophistication and connectedness."

Green appealed to the audience to stop using eyeballs as the sole arbiter for advertising. "You risk losing relevance with an entire generation of viewers that looks to video not just for distraction, but also for engagement and connection. And that's where there is a tremendous opportunity (for you)," he said in closing. "If we're able to rely more on you for support, we can spend more of our time building the type of engagement that can build your brands." Grade: 5 Jacks for Green; 3.5 Jacks for everyone else.

Overall Grade: 4 Jacks  Sadly, this could have been one of those very rare 5 Jacks events (like CBS most years at Carnegie Hall). On every level but one, YouTube's Brandcast worked to the hilt, thanks to sensational production values and pace and the parade of executives/commentators highlighted by John Green. But the one level that did not work was huge -- not offering any information about this enterprise's future. When it comes to Upfronts or NewFronts that's one element that should never be overlooked.

Next up: Hulu, plus capsule reviews of other NewFront presentations.