By Simon Applebaum May 10, 2016 Tomorrow Will Be Televised Archives 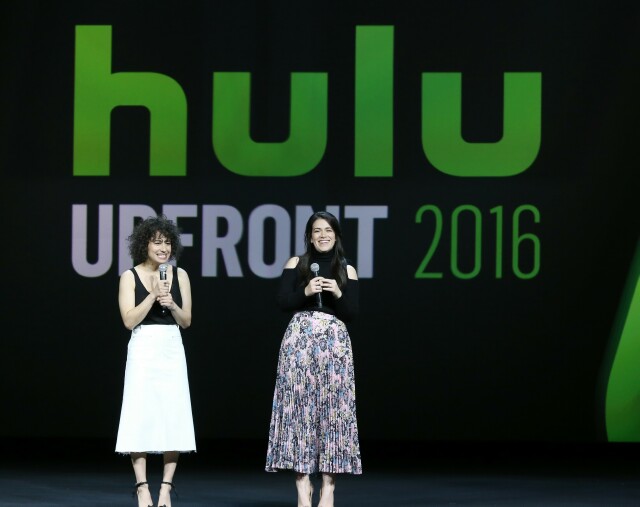 Hulu's portion of the Digital Content NewFronts last week was a NewFront by billing, but not by definition. When attendees showed up to see what the service expects to offer during the next 12 months, they learned that the event was being referred to as an “Upfront.” The slogan "Come TV With Us" was front and center.

Venue: Madison Square Garden's The Theater, which used to be home of YouTube's annual Brandcast and will house Turner Network's presentation next Wednesday morning. Coffee, fruit cocktails, mixed fruit juices and bite-size donuts were served in the lobbies, and the theater itself looked ready to stage an awards show, complete with staircase to the stage, decked in green to match Hulu's logo.  Grade: 4 Jacks

Presentation: Hulu left no doubt which distribution platform is its meal ticket -- smart TV sets and TV-making devices. About 70 percent of their customers watch the service via TV in the living room, and that ability pushed penetration up 30 percent in the last year to more than 12 million subscribers, said Chief Executive Mike Hopkins (pictured above). "We're putting TV back into TV," he noted, "and we're doing it all hours of the day among all demographics." Hopkins' executive colleagues maintained that message throughout their remarks. At one point, Senior Vice President of Advertising Peter Naylor called TV "the newnew media for today." When executive were not on stage and snappy videos weren’t being played, stars of Hulu original series from "Difficult People" to "The Mindy Project" held court. (Mindy Kaling is pictured below.)  “People” co-star Billy Eichner had the line of the day: "The N-word at this upfront is Netflix." How things can flip from a year ago, when show creators owned the spotlight here. Grade: 3.5 Jacks

News: Under a new collaboration with dynamic ad tech company BrightLine, Hulu will sell and play interactive TV advertising throughout its lineup this summer. Smart TV/device viewers who catch these spots will have the option to click for supplemental information or a customized Web page related to the ad. Havas Media is the first agency to utilize this interactive option by reaching a charter arrangement. Specific participating Havas clients will be named later. In separate ad developments, Hulu will use Nielsen's new comprehensive tracking of smart TV/device usage and partner with Magna Global and Millard Brown on various studies measuring how effective smart device-placed messages are with viewers. On content, look for the launch of dramas "Shut Eye" and "Chance" in August and October, respectively, followed by the miniseries "The Handmaid's Tale" in early 2017. Concert promoter Live Nation will create a music series produced in virtual reality format and a new documentary showcase will launch with "The Beatles: Eight Days a Week" from director Ron Howard (already busy with several National Geographic Channel projects). One more thing: Triumph the Insult Comic Dog will be on the campaign trail for a pre-election special. Grade: 4 Jacks

Hosts: "Broad City" creators/co-stars Abbi Jacobson and Ilana Glazer (pictured at top) did the honors, and as always their comedy was spot on. In fact, they delighted in taking a shot at one of Hulu’s signature series. Pointing out that "Difficult People" on the surface "has the same plot line as our show," Glazer said, "maybe they owe us some royalties." Added Jacobson: "I'm (practicing) my Upfront buzzwords, because I don't know what the s--t these mean." Grade: 3.5 Jacks

Star Time: After the teleprompter went AWOL, "People" co-stars Billy Eichner and Julie Klausner and executive producer Amy Poehler went on a lengthy improvisational riff that drew belly-laughs from start to finish. Great to see former "Burn Notice" star Jeffrey Donovan live on behalf of "Shut Eye." Put me in the camp of people happy to hear "Chance" star Hugh Laurie discuss anything in whatever accent he chooses. Grade: 3.5 Jacks

Cuisine: Not much to talk about. Grade: 2 Jacks  (Note: Cuisine ratings do not factor into the overall Jacks score.)

Overall Grade: 3.5 Jacks  Plenty to process, supported by nice pace and production values. Hulu’s launch of interactive TV ads on a national scale may end up being one of the huge takeaways from NewFronts 2016. And with Hulu fully embracing the smart TV/device movement, I'll go out on a limb and predict they will follow Crackle and stage their own pre-NewFront event next spring.

Notes from the passing NewFront parade:

Virtual reality is en route to being reality. Everyone is either announcing their first VR-crafted project (as Hulu did above) or forming studios/labs assigned to VR development (The New York Times, Conde Nast and Refinery 29, to name three). What's not clear yet is how people will watch what transpires. Will the smart TV/device be the favorite platform, or will it be the universe of headgear and objects you pay for to watch (Oculus/Next VR/Gear VR from Samsung, etc.)? Or will both options succeed? (New York-based Littlestar offers content through Apple TV as well as through Oculus-type headsets.)

New content or talent incubators are out to nurture the next generation of series creators, especially women and people of color. Examples include Refinery 29's "Shatterbox Anthology," producing 12 short films from women, including actors Chloe Sevigny, Kristen Stewart and Gabourney Sidibe; Spark by Maker (Studios), focusing on unscripted/semi-scripted concepts; and a trio from Conde Nast entertainment: "Project: Her," "Big Script" and "Creators In Residence."

Cutting-edge documentaries are hot. Consider "Popdocs," an ongoing long-form project from Popsugar that explores both mainstream and under-the-radar topics. First up: "Women Breaking Barriers" with Chevrolet as sponsor.

A quick recap of our Jacks ratings system:

Photos courtesy of Hulu. The opinions and points of view expressed in this commentary are exclusively the views of the author and do not necessarily represent the views of MediaVillage/MyersBizNet management or associated bloggers.