By Simon Applebaum May 08, 2015 Tomorrow Will Be Televised Archives 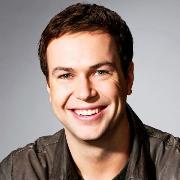 Venue: Hammerstein Ballroom inside Manhattan Center on W. 34th St. near 8th Ave., the former home of TBS/TNT's big Upfront ceremony. Outside, the green-and-white marquee and wall frames highlighted new series coming to the service. Inside, attendees were served breakfast or served with a Variety cover story at their seats. Strips of flashing lights were constructed in the orchestra section, grabbing the attention of host/”Saturday Night Live” co-star Taran Killam. "How about this lighting scheme, huh?” he asked. “Like a friggin rock concert, except it's 9 in the morning and you're at work!" Grade: 3.5 Jacks

Presentation: Hulu chief executive Mike Hopkins teased one main theme early on, when suggesting 60 percent of Hulu subs watch "on the best screen available," an indirect reference to smart TVs and devices like Roku. Predicting that 2015 will be the year Hulu breaks out, Hopkins formally announced Cablevision Systems as the first multichannel operators to offer Hulu on TV in some fashion -- that fashion to be determined and implemented later this summer. "And we'll roll out to several other providers as well," he added. (Mission accomplished there, now that Hulu entered similar agreements earlier this week with a group of MSOs including Mediacom and Atlantic Broadband. Mediacom went a step further by clearing Netflix to be delivered among its subscribers via TiVo.) For advertisers, Hulu is a more attractive vehicle to consumers due to less clutter, less commercial breaks and the ability to dynamically insert relevant spots anytime, senior vice president Peter Naylor advocated. And with some sponsors, Hulu is willing to create messages that feature viewers using their products or services while in front of the set. A demonstration spot incorporated Frito-Lay's "Wavy" chips. Grade: 3.5 Jacks

News: Five new scripted series will debut between summer and next winter, starting with NYC-based comedy “Difficult People.” (Amy Poehler is one of the executive producers.) Up next: “Casual” (dysfunctional family involving bachelor brother and newly-divorced sister, with Jason Reitman as executive producer) and “Rocketjump: The Show” (“Video Game High School” creator Freddie Wong in a satire about making short videos). Not far behind will be “The Way” (family involved in a faith-based movement, executive produced by Jason Katims of “Friday Night Lights” and “Parenthood”) and “11/22/63,” the much-touted adaptation of Stephen King’s novel starring James Franco and overseen by King and J.J. Abrams. Grade: 4.5 Jacks

Host: Killam got a few digs in, while Hopkins and his Hulu lieutenants handled themselves well. Grade: 3.5 Jacks

Overall Grade: 4 Jacks Well-organized and paced effort with good talking points and much news layered throughout.

Special note (first of two): Hulu's exclusive streaming rights deal for “Seinfeld” may end up as one of the most overblown developments of this Upfront/NewFront period. Did everyone forget that “Seinfeld” has been in syndication on TV stations for years and will continue to be offered this way? The Cablevision Systems affiliate deal is the far bigger story deserving of headlines. Let's see how Netflix, Amazon Studios, etc. react. Still, nice to see Jerry Seinfeld on another stage so soon after that celebrated Crackle visit last month. Pleasure again to hear his answers to audience inquiries.

Special note (second of two): Collective Digital Studios' turn this past Tuesday contained both a highlight and lowlight of this season. The highlight: "Gotta Share," a funny opening number by Improv Everywhere on the exploding impact of social media. Beautifully pulled off. The lowlight: One of Harper's Bazaar's editors interviewing three popular fashion/beauty content creators. If you didn't glance at the teleprompter near the rear of SVA Theater, you wouldn't have known that the entire segment was scripted, right down to the editor's questions. I came away disgusted by their attempt to put one over on the crowd. The threesome -- Meredith Foster, Alexa Levy and Wendy Nguyen -- are extremely articulate and poised people who could have handled this without the crutch of a script or a prompter. 0 Jacks to whoever came up with this, whoever approved it, whoever didn't raise objections and the Harper's editor (who will remain nameless) for participating.

A reminder of our Jacks system:

Up next: Capsule reviews of other NewFront presentations

Until next time, stay well and stay tuned.