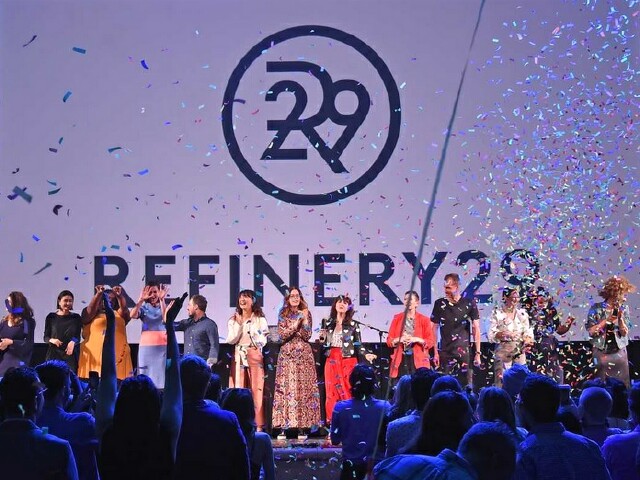 What started as an online guide to New York’s fashion scene has morphed over the last 13 years into a fountain of unscripted content geared to young women and women of color.  Long- and short-form scripted efforts, such as the Shatterboxshorts anthology, kicked in during the last two years, and the company has a content development arrangement with TNT.

Venue:  Town Hall, the historic performing arts theater on W. 43st St. near Avenue of the Americas.  The on-stage video screen posted a variety of ways to spell abundance, a reference to Refinery’s “World of Abundance”-themed remarks ahead.  Grade: 3.5 Jacks

Presentation:  One of the few NewFronts to put diversity front, center and throughout its showcase. Through both scripted and unscripted formats, Refinery 29 reaches out to young women, no matter the skin color or gender orientation. “When you see (this logo), we see you belong,” reflected Chief Content Officer Amy Emmerich.  Some portions combined content introductions with tributes for milestone Town Hall performances, including contralto Marian Anderson’s concert in 1935 (her first New York performance ever).  Grade: 4 Jacks

News:  Channel 29, a new programming service with scripted, unscripted and interactive features, will launch this fall via smart TV sets and TV-connected devices.  Grade: 4.5 Jacks; would have been 5 Jacks with more content specifics.

Host:  Duties were split among Emmerich and other company executives.  Grade: 3 Jacks

Star Time:  Dynamite closing appearance by Spotify recording star Lizzo.  With two backup dancers, she delivered a pair of pop tunes, after which the audience was drenched with confetti (photo at top).  Grade: 4 Jacks

Cuisine:  No food served, so no Jacks awarded. (Note: Cuisine ratings do not figure in the overall Jacks score.)

Overall Grade: 4 Jacks Inventive weaving of Refinery’s mission with Town Hall’s legacy, in addition to announcing the coming of Channel 29, which may go down as the most important development at the 2018 NewFronts.