By Simon Applebaum May 12, 2015 Tomorrow Will Be Televised Archives 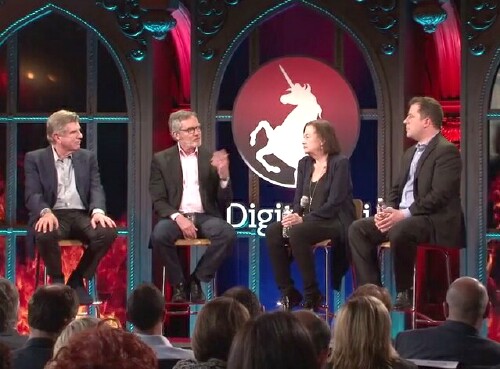 Four more reviews from the NewFront front, beginning with ...

Venue: The Refectory at High Line Hotel (10th Ave. between 20-21st Streets). Last used by National Geographic Channels last spring for an Upfront press gathering (among the best of 2014), DigitasLBi made the room more church-like, from a stage design resembling Sunday mass to “The Late Show's” gospel choir welcoming attendees with rousing versions of "What The World Needs Now Is Love," "Let It Be" and "All You Need Is Love." Grade: 4 Jacks

Presentation: Digitas invented the NewFront concept eight years ago as one half-day event showcasing the current and coming Internet-delivered programming. Now that individual programmers have two weeks for a blitz of showcases under (and in some cases, apart from) Interactive Advertising Bureau's oversight, the format has turned into a mix of one-on-one leadership interviews and trend-focused roundtables -- some on target, others not. This time around, the activity was more lively and on point. "The power of original digital storytelling is changing who we are and how we connect," Digitas chief content officer Scott Donaton noted off the bat. "It's important to understand the greater forces behind this marketplace."

Vice chief executive Shane Smith provided plenty of information about where his venture is going during a keynote interview, stopping short of acknowledging a deal to morph A+E Networks’ H2. "We go into white spaces because nobody else is there," Smith explained. "We can do a lot in the TV space with production partnerships (like the A+E investment and HBO's daily newscast commitment). That's the direction we're going to go in." A reunion of key MTV executives Bob Pittman, Judy McGrath and Tom Freston (pictured above) was another highlight, with content players encouraged in Pittman's words "to play with as many platforms you can afford to play with," TV, Web and mobile included. Grade: 3.5 Jacks

News: Digitas struck a programming/advertising partnership with Vice, covering projects for TV, online and movies. No specifics on the length of this partnership, Digitas clients involved or content in development. "This will be the cutting edge of a new space," Smith promised. "We can weave our resources into all of these offerings. That ability has never been tapped before." New Form Digital, the Discovery Communications/Imagine Entertainment-managed venture incubating short subjects from new talent, will launch “Oscar's Hotel” on Vimeo this fall, its first series for that Web site. Grade: 3 Jacks

Host: Donaton provided worthwhile context throughout the event, while DigitasLBi North America chief executive Tony Weisman did a solid job with his interviews (although he did not ask Smith about the H2 situation). A roundtable on Meerkat went nowhere ... and yet, when you see this buzzed-about social media newbie in action, you can foresee a nice Meerkat future on smart TVs and devices like Roku. Grade: 3 Jacks

Overall Grade: 3.5 Jacks  Scaled-down exploration of the digital media marketplace continues to be a mixed bag, but this edition scored more than not. Good stage display and videos.

Special note: Due to the large crowd, press was isolated to a basement room that was deficient in several respects. Most egregiously, not one speaker came down to the press room for additional conversations or mingled with everyone outside at a post-event reception. We'll leave why not to your imagination. Instead, let's invite Digitas to engage their speakers next year to engage with press and guests.

A reminder of our Jacks system:

And now, more capsule reviews of other NewFront showcases:

Venue: Pierpoint Morgan Library (Madison Ave. and E 36th St.), a space that hadn’t playing home to this kind of event for years. Big presentation points: Continued investment in "adventure capital" and delivering that among all platforms, plus an expanded social media presence. "We believe in the power of science, exploration and storytelling to change the world," declared Nat Geo Society president/chief executive Gary Knell. "We've got one billion Instagram likes. That puts us in company with Justin Bieber, Beyonce and the Kardashians -- and we're racing ahead of One Direction. Hey, what's up?" (A sure nominee for best Upfront/NewFront quip of 2015.) Big news points: Seven new 2015-16 series include “Adventure 5” (billed as the ultimate adventure cheat sheet), “Quick Thinker” (factoids tied to current science/tech news) and “In a Weekend” (55-hour journey to unique destinations). What worked: Classy setting inside Gilder Lehrman Hall, kicking off with both photo and video montages; roundtable with a trio of Nat Geo photographers, each demonstrating the work with a slide presentation (big improvement over last year's event, where each subject rambled on and on...) What didn't work: Premiere dates, anyone?  Overall Grade: 4 Jacks

Next up: One last NewFront presentation roundup and a final comment or two.