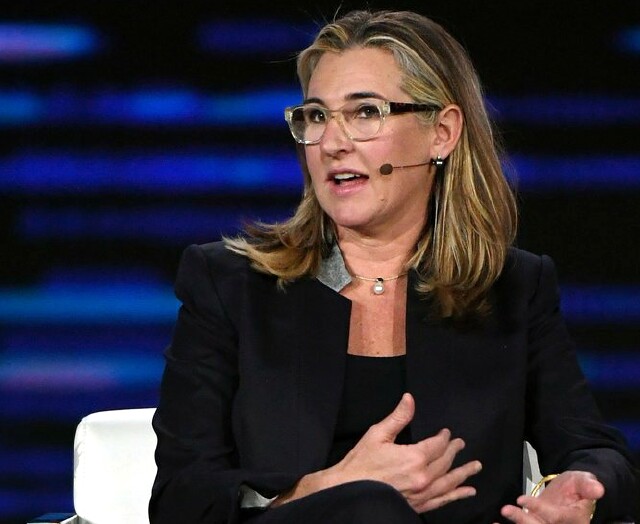 Venue:  Spring Studios near the Holland Tunnel, which played home hub to the annual Tribeca Film Festival the previous two weeks.  A fifth-floor space was set up with semi-circular stadium seating, including bleachers in the center section.  Part of the stage was dedicated for a roundtable interview, with videowalls on either side showcasing factoids on the state of Vice’s audience.  Mini-bars serviced attendees at both ends of the space.  And yes, even after four days of NewFronts with three or four events each day, the house was packed.  Grade: 4 Jacks

Presentation: As much as possible, Vice let its employee base -- from Viceland producers to Vice News Tonight correspondents -- do the talking.  Right from the opening video, they positioned their venture as less business than a movement going to the next level.  (Note: A+E Networks and Vice are partnered on Vice Media.)  Dubuc invited attendees to champion what those employees produce through advertising commitments.  “I’m a creator at heart and disruptor at heart,” she said.  “This industry desperately needs innovation and consumers are crying out for it.  I’ve never seen an organization more creative than this one.”  The panel session, moderated by new Senior Vice President Marsha Cooke (coming over from CBS News), demonstrated the multi-platform approach already in place to reach that next level through online, TV and hand-held devices.  Most unique element:  turning the obligatory sales pitch over to an equipment sales manager, speaking via videotape from his job site.  Grade: 3.5 Jacks

News:  Attendees found a “New Frontiers” book at their seats with details on numerous near-term initiatives.  Among them: new Viceland programs The Hunt for the Trump Tapes (Tom Arnold and celebrity friends on a quest to retrieve controversial footage of Donald Trump pre-Presidency) and Hustle (young entrepreneurs turn their business fortunes around, with Alicia Keys among the executive producers).  Viceland is also inviting advertisers and outside producers/content companies to co-develop new series.  HBO’s Vice News Tonight weeknight program will introduce several recurring segments, including “She’s Running,” covering Republican and Democratic female candidates across the country.  Multi-platform projects ahead include Generation Vice 2018 and Humans of the Year Awards.  Grade: 3.5 Jacks

Hosts:  Dubuc came off smooth and ready for the times ahead, while Cooke and International President Dominique Delport handled their portions in understated style.  Grade: 3 Jacks

Star Time:  Subjects from the just-launched Viceland series My House (about a Brooklyn dance hall catering to gender-bending citizens) let their talent rip.  Let’s say the audience got served, with considerable help from hall owner Precious.  That person is one amazing personality.  Grade: 4 Jacks

Cuisine:  Appetizer city all the way, and all bite-size.  Best eats: rice cakes and chicken burgers.  No worst eat; it was all good.  Grade: 3.5 Jacks (Note: Cuisine ratings do not figure in the overall Jacks score.)

Data Insight:  More than half of all Vice viewers are optimistic about their financial future.  Three out of four viewers want to cause political change, while four out of five make it their business to seek other viewpoints on controversial topics.  Nice range of factoids, both on the videowalls and in the “New Frontiers” book.  Grade: 4 Jacks

Innovative Opportunity:  The Sixteen Project, consisting of multi-platform profiles of 16 teenage athletes and the competitions they enter.  Grade: 3 Jacks

Overall Grade: 3.5 Jacks  One of the few NewFront showcases giving considerable time to TV as well as online/digital productions.  Extra credit for being a rare public display of Viceland, among the most unique basic cable networks in structure and content.