By Simon Applebaum May 09, 2018 Upfronts/NewFronts Archives 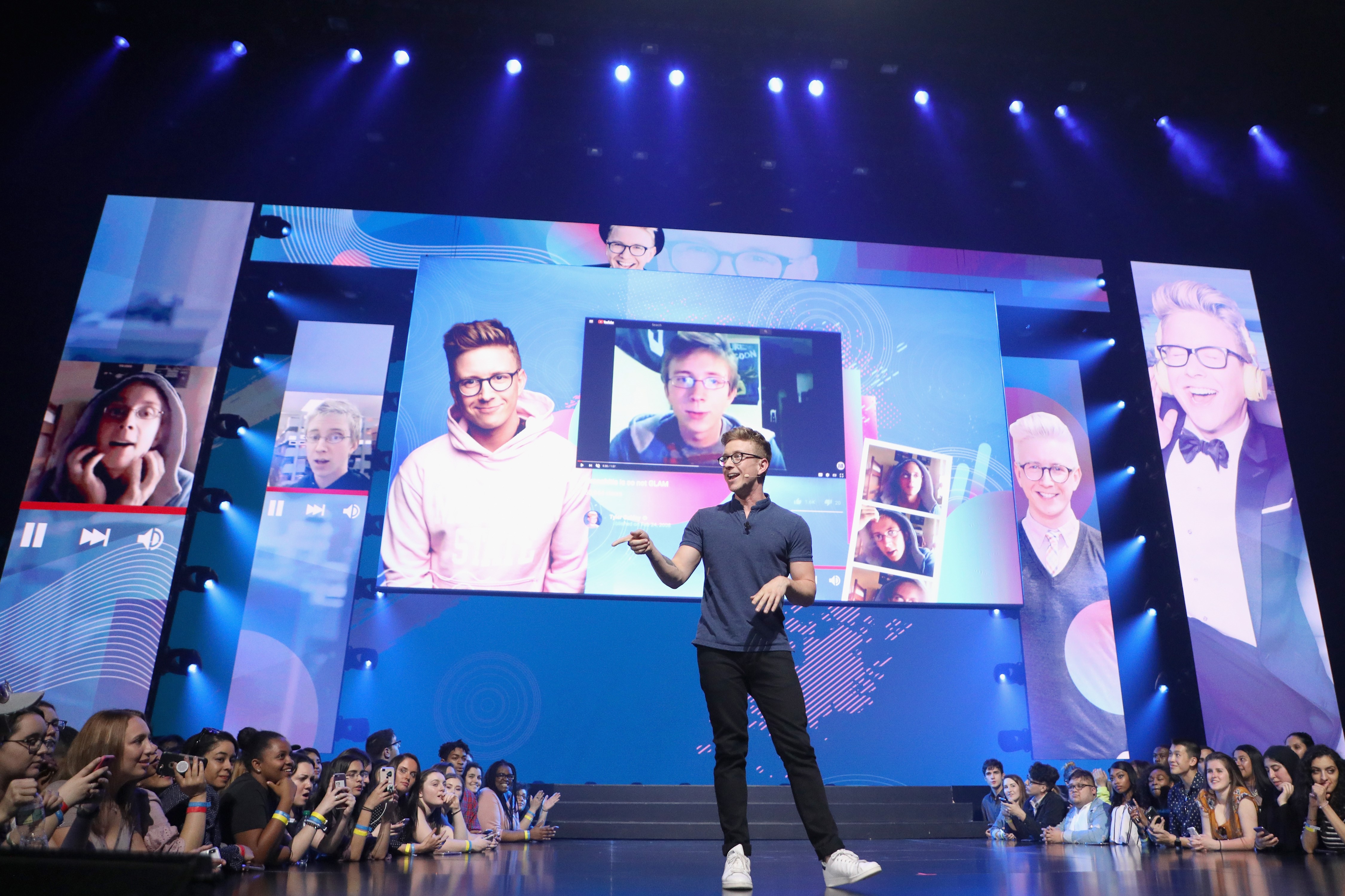 There was much ado new about YouTube's annual Brandcast last Thursday night -- new space, new presentation approach and a new embrace of a growing way people see this video phenomenon.  One element remains in place: a knack for offering among the most ingenious, star-powered entertainment of any annual Upfront or NewFront.

Venue:  Radio City Music Hall, the annual site of NBC/NBCUniversal's Upfront (next Monday) and where MTV will return late summer for its Video Music Awards.  Few venues of this grandeur (more than 5,000 seats) surpass Radio City when it comes to stagecraft and cutting-edge graphic displays.  Popcorn and soda (as in whole bottles) were distributed among attendees en route to their seats and monitors were set up around the lobby for latecomers.  Grade: 5 Jacks

Presentation: Previously, YouTube would operate its showcase like a variety hour -- opening performance or video, followed by remarks, then a celebrity guest spot, and so forth.  In a radical departure (some might conclude gamble), the format came off like a two-act play.  Act One consisted of announcements, testimonials and videos (roughly 45 minutes), with Act Two largely one big round of performances.  The opening portion could have induced many on hand to groan, and didn't, thanks to the balance of YouTube executive patter and videos.  Chief Executive Susan Wojcicki stressed two points in particular.  First, the YouTube-watching universe of smart TV sets and TV-connected devices is now a force to be served.  Second, being a content carrier open to all creators and platforms carries great responsibility.  "There isn't a playbook for how open platforms operate at our scale," she acknowledged.  "But the way I think about it is it's critical that we are on the right side of history."  Grade: 4 Jacks

News:  The unscripted original programming movement that kicked off the last Brandcast will expand over the coming months, after the first batch of originals elicited more than 700 million views.  Best Shot, a high-school basketball documentary series from LeBron James, will be an early addition to the YouTube Originals lineup, along with If I Could Tell You Just One Thing (inspirational advice forum with Quantico star Priyanka Chopra) and Training Days (soccer training satire with Jack Whitehall, sponsored by Wendy's).  Will Smith, currently involved with One Strange Rock on National Geographic, will celebrate his birthday September 25 with The Jump Off, a live special where he will bungee jump from a helicopter over the Grand Canyon.  Grade: 3.5 Jacks

Star Time:  A set of all-out music and dance montages, featuring a group of YouTube personalities from Postmodern Jukebox to Lia Kim, pumped the place up with substantial help from Radio City's graphics and technical crews.  That gave way to super talent on the rise Camila Cabello (pictured below) singing her chart-busting hit "Havana" and a three-song closing set from superstar Ariana Grande.  In between, The Daily Show host Trevor Noah thanked Kanye West for providing a new source of humor, while comedian/actress Anna Akana (star of current YouTube Red dramedy Youth & Consequences) documented how YouTube has increased the media spotlight of Asian-Americans.  "I no longer had to be frustrated by the lack of diversity on the screen, because now I had the opportunity to write and produce the authentic stories I wanted to tell," she said.  "There is no glass ceiling.  There is no suit telling me there are no bankable Asian stars, and no bit parts."  Grade: 5 Jacks 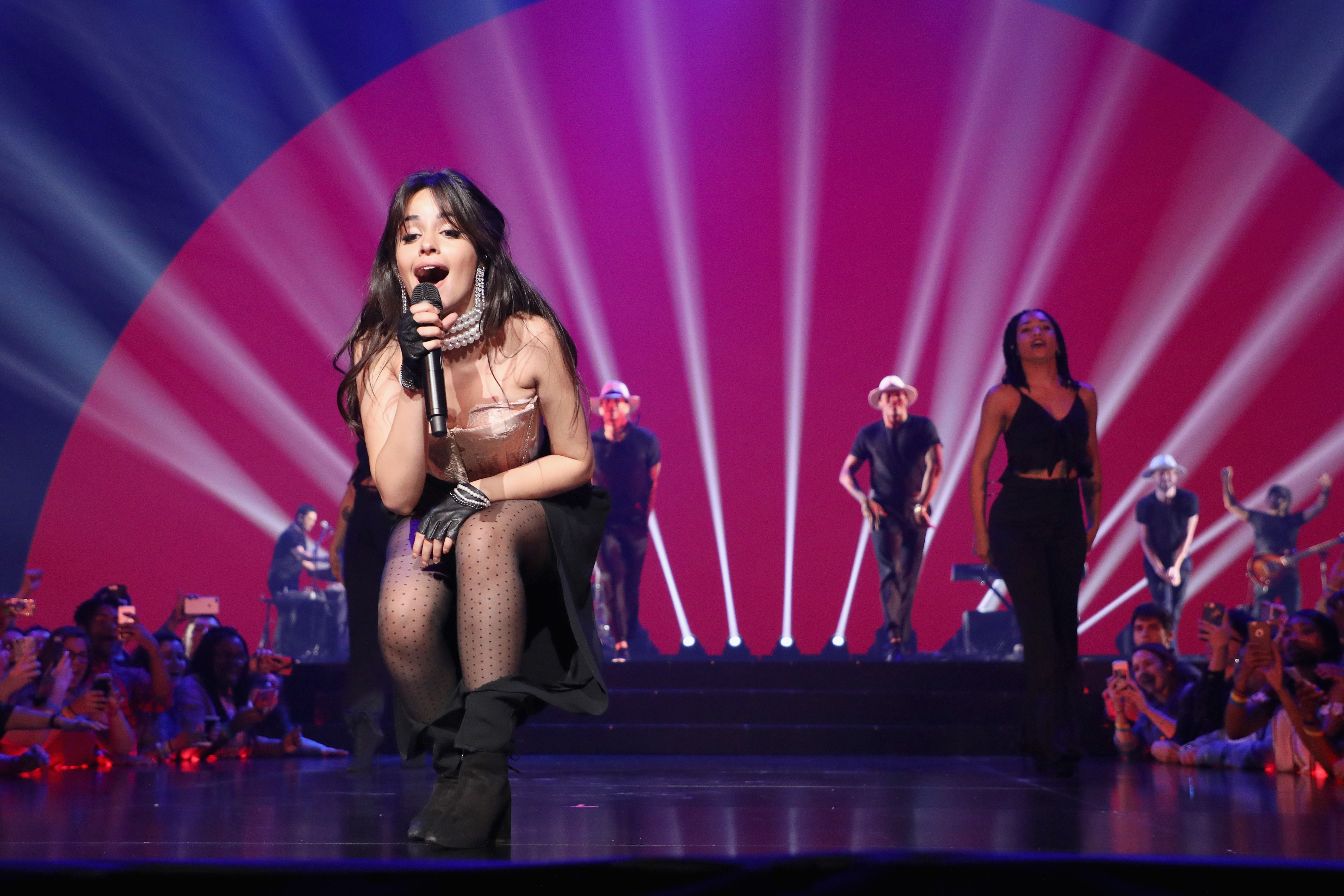 Cuisine:  Great eats abounded at the Rockefeller Center skating rink-quartered after party … when you could get to the food.  The placement of the food stations inside the rink caused a traffic jam and long wait times.  Unfortunately, people were not directed to other, less crowded food stands in the center concourse hallways.  Best eats: cold sesame noodles, mushroom po-boy sandwiches and Cubano sandwich bites.  Worst eats: the tater tots.  Grade: 4 Jacks for the food; 1.5 Jacks for the layout.  (Note: Cuisine ratings does not figure in the overall Jacks score.)

Data Insight:  More than 1.8 billion people log onto YouTube every month, consuming over 150 million hours every day via smart TV sets/TV-connected devices.  Seven out of every ten YouTube viewers catch what they watch over those sets or devices. Grade: 4 Jacks