By Steve Gidlow February 12, 2021 Behind the Scenes in Hollywood Archives 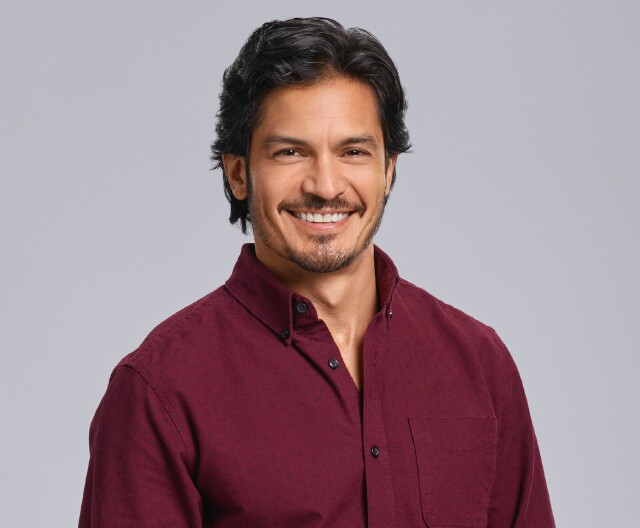 Nicholas Gonzalez, a former co-star of ABC's acclaimed drama The Good Doctor, makes his Hallmark Channel debut this weekend with the premiere of Playing Cupid. The film, which also stars Laura Vandervoort and newcomer Mia Quaranta De La Rosa, tells the story of restaurateur David (Gonzalez), a divorced father raising his entrepreneurial teenaged daughter Clara, who unwittingly finds himself the subject of her school assignment to create a small business. With matchmaking her greatest talent, Clara utilizes her skills to create that small business, and what better test than forging a relationship between her father and recently single middle-school teacher (Vandervoort)?

For Gonzalez, this project and the opportunity to join the Hallmark family came at the perfect time. "It was a different step [for me]," he admitted during an exclusive interview with MediaVillage. "But I have to say it felt right, and it was a first, so saying yes to this project was easy!

"Because it was a partnership with Scholastic Books I felt the story, even with [the inclusion of] an adolescent storyline, had an element of 'Not in the [Hallmark] world of every-town U.S.A.' to it that Hallmark doesn't always do," he continued. "We were dealing with real-life issues; the trials and tribulations of single fatherhood, and divorce. Yes, the 'D' word. We actually say it in this movie. So, while there are a lot of real, big, dramatic topics, I felt it had such heart at its base that it didn't feel like a departure from the dramatic roles I usually do." 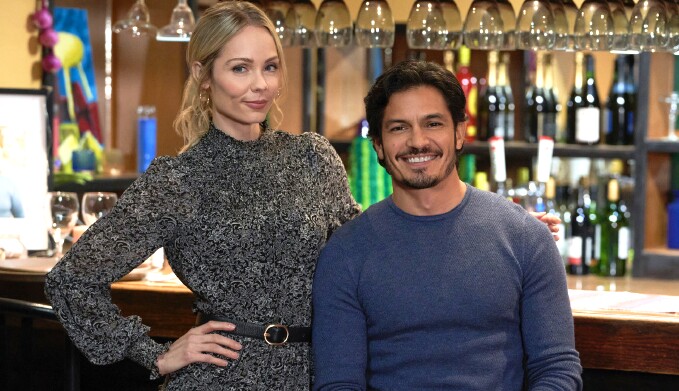 For Gonzalez, that realism was extremely relatable. "My parents divorced when I was three," he shared. "I grew up as a latchkey kid with a single mother trying to do everything. I grew up with the arguments between two people who are trying to do their best to be there for their child, which I feel we do in this movie. What's at the forefront of the film is my daughter's well-being, not only from her teacher, but me and my soon to be ex-wife. It's very real to me, as I remember these interactions and feeling like, 'There's something wrong with me and my family because my parents are unable to stay together.'

"We even deal with that theme, which I felt very touched by as it was being told," he proudly added. "This isn't a fantasy of just watching two people fall for each other. There are real issues of life that come into play to pull them apart; even while all these forces are working to bring them together." 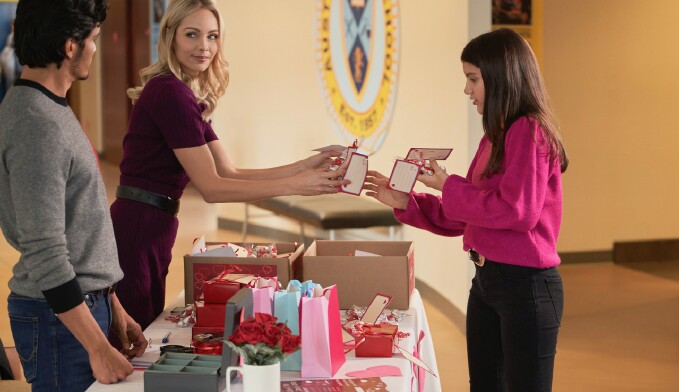 While the issues dealt with are real, the film is steeped in lighter moments, and the pairing of Gonzalez and Vandervoort (photos above) is a credit to Hallmark Channel's casting. "I think Laura got there the day we started, which I can't even believe!" he recalled. "I need a couple of days for wardrobe because I can't be on-set trying things on. Laura was like a machine! She showed up from another production, probably still in her makeup, and was game. It was two people coming together to make this the best we could and have fun, and we genuinely had really similar senses of humor. I love working with people who are on top of their game and doing their thing; it just really makes life pop on screen."

One other important element of the film was the casting of David's daughter Clara (Quaranta De La Rosa). Despite this being her first project, she proved to be a natural. "I was like her big brother," Gonzalez laughed. "I'd pick on her, just to get her going a bit. I asked the director, if it was okay with her mom, I'd love to take them both out to dinner. With COVID, it's hard, but we had all the tests, so we found the time. She was captivating and such a fun, interesting girl. I said after our meeting, 'You just have to be yourself.' That's one of the most liberating pieces of advice I wish somebody had given me years ago."

With its realistic depiction of a Latino family, Playing Cupid also reflects Hallmark Channel's efforts to explore more diverse storytelling. "That was a huge part of me wanting to do this," Gonzalez declared. "This is based on a book, and [with book adaptations] there is sometimes a bit of a feeling like things were put in as a little sprinkling, but I didn't feel like that with this. It all felt organic to the experience. I was genuinely a restaurant owner and the recipes and things were garnered from my mom and my family who happen to be from Mexico. That's a world I know. It was also important for David and Clara not to whitewash anything.

"There are lots of little terms of endearment I added in scenes," he elaborated. "Little things like calling her 'mama' at times that definitely weren't written. Our script supervisor would come around and be like, 'You're calling her Mina, but it's Clara in the story.' I was like, 'No, I'm calling her 'Mija' which [means] 'my daughter.' She and I would laugh about it. Everyone else on set was Canadian and kind of like, 'Alright, so just trust them.' We were very adamant about making the story very real for both of us."

Playing Cupid will premiere Saturday, February 13 at 9 p.m. on Hallmark Channel as part of the network's annual Love Ever After programming event.