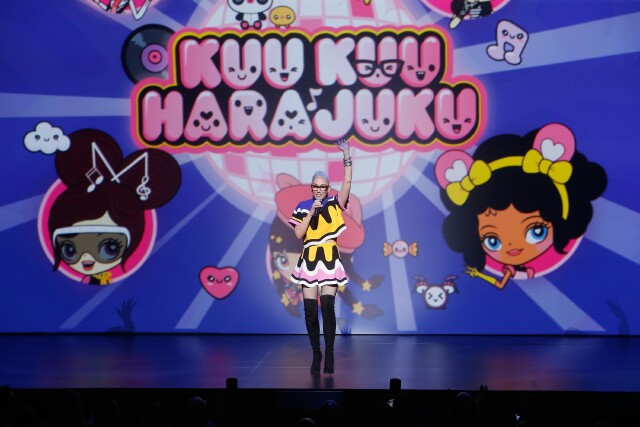 For many television services -- broadcast, cable, multicast or streamed into smart sets and devices -- an annual show-and-tell public ritual is here again. Yes, 'tis the season of Upfronts and DigitalContent NewFronts, taking place from now until mid-May all around New York City. With Nickelodeon kicking it all off last week, we're back with our annual reports and reviews on what went down at individual presentations. As always, we'll rate aspects of these presentations by Jacks (check below for how that works).

Venue: Rose Hall, inside Jazz at Lincoln Center on Columbus Circle, the classy auditorium playing home to many an Upfront event, including whoever plays first in line. When it comes to technical capabilities and eye-catching stagecraft, Rose Hall comes off as the gold standard, and Nick usually takes advantage of both by welcoming audiences to lively animation or variations of their orange logo on stage. Not so last Thursday.  Attendees saw a multi-level video wall of pure orange at center stage, arranged as a child's building blocks with the largest one at the bottom.  No animation, no logo, just orange.  A more sedate vibe compared to recent years.  The house DJ made sure Bruno Mars' "Uptown Funk" was played near start time to rev the crowd.  Grade: 3 Jacks

Presentation: Right off the bat, new Viacom CEO Bob Bakish demonstrated that the era of his company's key executives playing silent as bystanders at their Upfront events is over. "Yes, give some applause," he told attendees seconds after walking next to the blocks. "Upfront season is upon us again, and Nick is No. 1."  After a quick review of his overall company strategy, Bakish praised Nick for "having a laser focus on its audience" and its intention to "make the world a more playful place." Expanding on the latter point, the opening video focused on Nick's format as offered worldwide, including a well-edited montage of Kids' Choice Awards ceremonies in different locations. Viacom Media Networks sales chief Sean Moran provided a different spin on the "playful place" motif right after Bakish, referring to the channel's recent "Story Of Me" research.  While the majority of kids are happy being kids, they've been exposed to all sorts of issues and opportunities from terrorism to gender acceptance. "If there's ever a time to be in lockstep with an audience, it's today," Moran declared. From there, Nickelodeon Group President Cyma Zarghami (pictured below) and Chief Marketing Officer Pam Kaufman promised that both Nick and Nick Jr. will generate that playful ambition in three ways -- increased original programming, partnerships with other Viacom units and taking outdoor outreach into new spaces. Grade: 4 Jacks 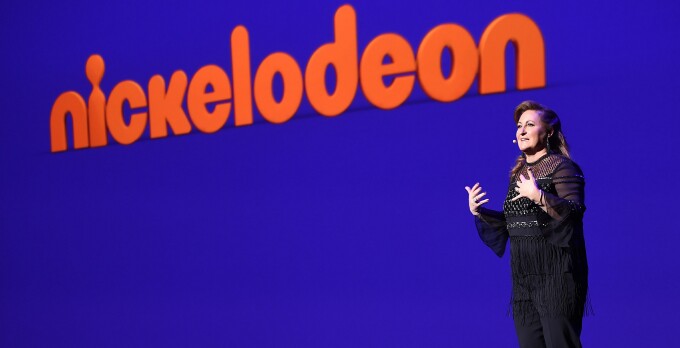 News: Some 700 episodes of current and new series will be made and presented between now and next spring. The breakdown: 200 episodes for Nick Jr., 200 animation and more than 300 live-action episodes. The new animated offerings include Pinky Malinky (a hot dog's life in mockumentary fashion), Welcome to the Wayne (three kids living in a strange New York apartment complex) and Butterbean's Cafe (fairy plays barista in neighborhood adventures). Hunter Street (five foster kids searching for their missing parents) will be the first of the new live-action series, launching March 13, followed by I Am Frankie (teenage experimental android copes with the world). In the partnership arena, the folks behind Spike's popular Lip Sync Battles will create a Shorties half-hour series with real kids in the battles, while CMT will turn The Dude Perfect Show (featuring the popular stunt-loving Web group) to Nick for new episodes. For 2019, Nick will turn Amusement Park, Paramount Pictures' computer-generated toon from the previous July, into a series. Zarghami suggested that going forward, other Nick-developed movies released by Paramount may go the same route. Separately, long-running comedy Henry Danger (entering season four this fall) will be joined by toon offshoot The Adventures of Kid Danger and Captain Man. Also in the offshoot picture: Rise of the Teenage Mutant Ninja Turtles, coming in fall 2018. As for the outreach avenue, elements ahead include retail merchandise inspired by digital fave JoJo Siwa,  opening new resort hotels in Mexico and elsewhere with attractions for both kids and their parents, and launching a multi-day SlimeFest music festival (date, location and artist info to come). Grade: 4 Jacks

Hosts: Zarghami and Kaufman worked their portions of the presentation well, with Zarghami getting a special kick out of introducing pop superstar Gwen Stefani (pictured at top), there to highlight Kuu Kuu Harajuku, the Nick toon she executive produces. Grade: 3.5 Jacks

Star Time: Pitbull, accompanied by six female dancers, musicians, DJs and a stunning light show, did his rap thing to Fireball and other recent hits. The kind of high-wire performance you would not have seen at Nick presentations past. "Thank you to Nickelodeon for making me a cool dad today," he shouted in parting. Grade: 3.5 Jacks

Cuisine: Heavy on three menu items -- sliders, paninis and spring rolls. Best: anything with chicken, including barbecue panini and chicken parmesan slider. Worst: fish and chips. The fish was bland without the sauce, and what, no ketchup for the chips? (Note: Cuisine ratings do not factor into the overall Jacks score.) Grade: 3 Jacks

Overall Grade: 3.5 Jacks Few presentations pack more into an hour, and do it without feeling rushed, as Nickelodeon.  As for Viacom CEO Bakish, with all sorts of speculation over how he would be in a spotlight like this for the first time, he came off in affable fashion.

Next up: A&E Networks... unless someone steps into the gap between Nick's event and this one.