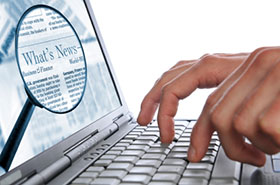 Today Nielsen released to the industry our Q1 2016 Total Audience Report. This version of the Total Audience Report takes a hard look at trends in total media usage, platform penetration and how the heaviest users of certain drive overall usage! Off the record, we think there are a lot of interesting storylines that are emerging here!

·       Total appetites! The total media consumption among U.S. adults has increased with an additional hour of overall time spent being consumed per day over different devices and platforms as compared to the prior year.

Below is the FULL corresponding Wire post. Please feel free to write about these insights, linking back to the report and sourcing Nielsen.

Milestone Marker: SVOD and DVR Penetration Are Now On Par With One Another

Much has been talked these days about the growing business of subscription-based video on demand (SVOD)—be it networks looking to sell streaming rights of popular TV series or studios creating critically acclaimed offerings that move directly from studio to SVOD services. So knowing how consumers are adopting, interacting and using platforms and devices is paramount for the industry in order for players in this space to efficiently operate.

SVOD penetration has been rising steadily over the past year, illustrating that viewers have a continued desire to control what they watch and when they watch it. And in many cases, that means more playback options is better. In fact, close to 30% of homes have a both DVR and access to SVOD—up nearly 20% from last year. 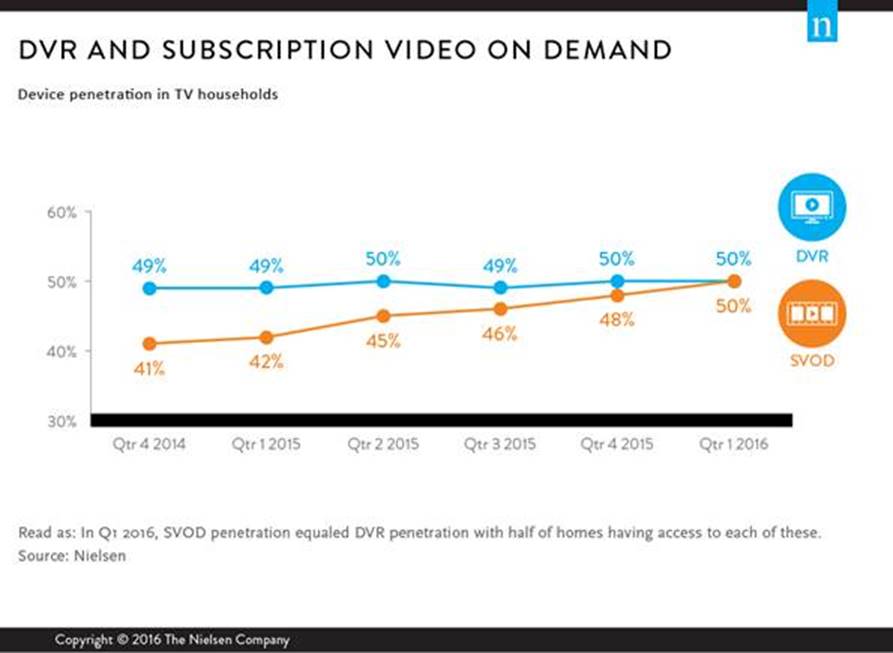 Can there ever be too much of a good thing? For digital viewers, the answer to this Shakespearian conundrum is a resounding "No!" According to the recent report, the heaviest users of digital devices account for a vast majority of each device or platform's overall usage. With penetration and usage of digital devices increasing, marketers and advertisers should take note.

In fact, a staggering 83% of smartphone video viewing, 87% of in-home PC streaming and 71% of TV-connected device usage stems from the top 20% of users. This shows that smaller behaviors done by fewer persons tend to be more concentrated among the heaviest users.

When looking at race/ethnicity, the same behaviors still ring true. Among Hispanics, the top 20% of users account for a whopping 92% of smartphone video viewing. Asian-Americans come in second with 89%, and blacks follow close behind at 88%.

Television and radio usage behavior is different among the top 20% of users because of both platforms' wide reach and availability. Instead, their distributions seem to be more balanced, with the heaviest TV and radio users accounting for around 50% of total usage each. Both mechanisms of media still hold the title when it comes to monthly reach: AM/FM radio attracts 240 million adult users and live + DVR/time-shifted TV attracts 226 million.

People are also spending more time with newer technologies. Daily usage of tablets and smartphones alone has increased 63% and 60%, respectively, among adults since just last year: tablet usage is up 12 minutes, and smartphone usage increased 37 minutes.

Although the time spent using traditional devices like television has remained constant, consumer attention continues to expand. That's not to say consumers are ignoring traditional forms of media–in fact, traditional platforms continue to account for the largest part of media usage.

The rapid growth of new media is indicative of an evolving media palate. With more choices being made available to consumers, it's becoming increasingly pertinent for marketers and advertisers to understand the behaviors associated with them.