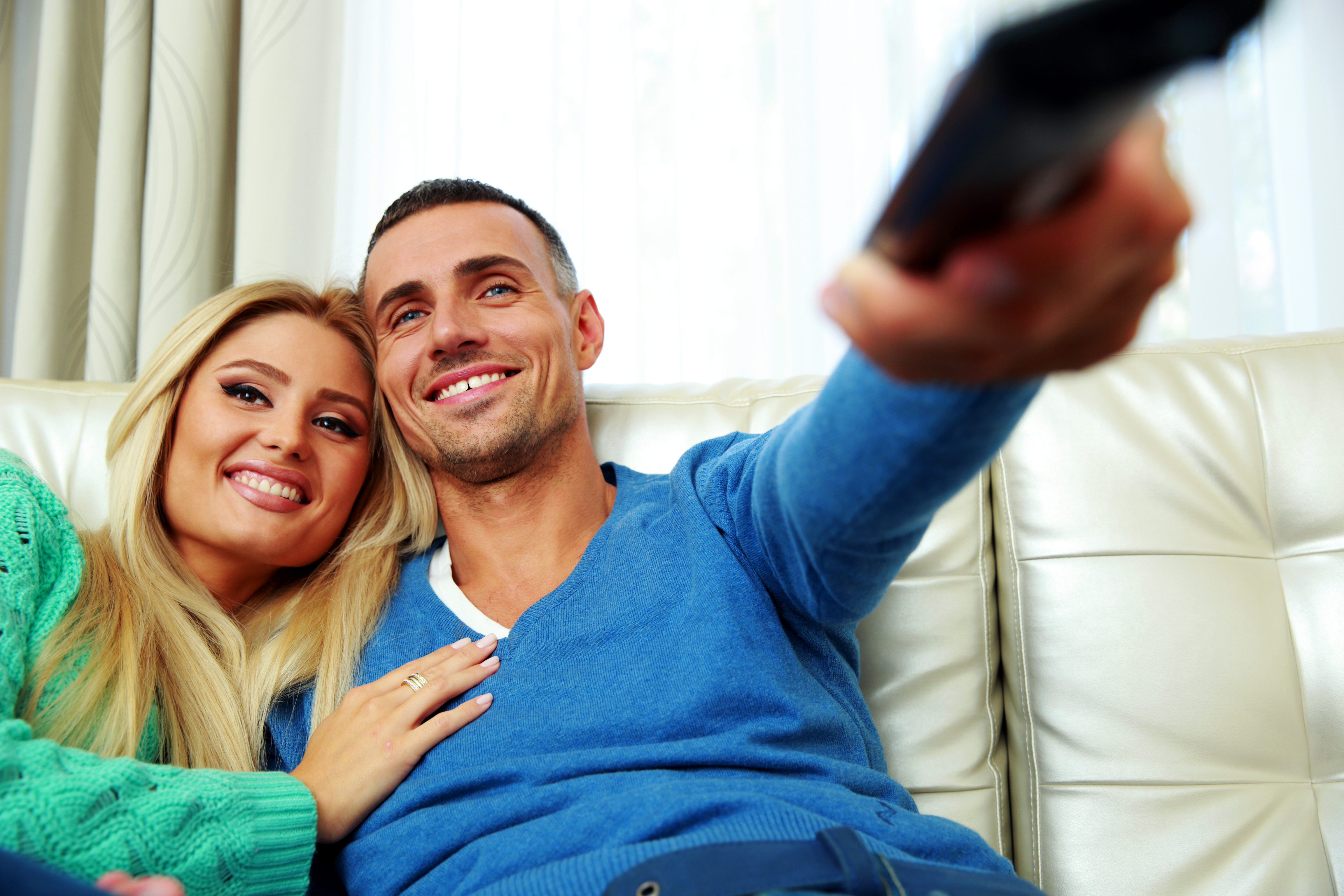 Martin Scorsese has directed some of the most revered and iconic films in American history. His latest film, The Irishman, looks to build upon his legacy as well as push the boundaries of both film distribution and special effects techniques. With legendary actors Robert De Niro, Joe Pesci and Al Pacino headlining, the latest Scorsese film is a crime epic that follows the story of truck driver Frank Sheeran (De Niro) as he gets deeply involved in the mobster underworld. Today, we're excited to share some insights and data on the viewership for The Irishman via Nielsen's Subscription Video On Demand (SVOD) Content Ratings solution, as well as some intriguing social media stats via Nielsen Social Content Ratings®.

The Irishman released on Netflix on 11/27, the eve of the Thanksgiving holiday — as opposed to a traditional Friday release. Even with a duration of over 3 and a half hours, the film attracted and retained a healthy number of viewers on its initial release day as well as throughout the extended holiday weekend. On its Netflix premiere date, the film brought in an average minute audience of nearly 2.6 million U.S. P2+ viewers. Across its first 5 days of availability, the film had garnered an average minute audience of nearly 13.2 million viewers, with the largest amount of viewing coming on the third day (Friday the 29th) with 3.1 million viewers. In terms of reach, the film had 3.9 millionunique U.S. viewers on its first day and over 17.1 million unique viewers over its first five days.

Due to the long weekend and growing interest in the already highly anticipated film, more viewers (including younger ones) were primed to watch. Across the first five days of release, the film showed a steady amount of viewers, as the average minute audience for each day hovered over at least 2 million viewers. Friday (11/29) and Saturday (11/30) proved to be the most fruitful, with each day bringing in an average minute audience of over3.1 and 2.8 million U.S. viewers, respectively. As the Thanksgiving holiday is typically reserved for family, feasts, parades, and football, more people seemingly looked to tune in after the holiday.

The length of the film and the amount of viewers who have been watching the movie in parts have also been points of interest. On its premiere day, 751 thousand U.S. viewers P2+ or 18% of its viewers for the day watched the movie in its entirety. That's on par with the premiere days of other major streaming films (with shorter run times) like Bird Box(18%) and exceeded El Camino (11%). On Friday (11/29), its most popular day, the film had its largest amount of viewers that watched the film in its entirety with 930 thousand.

In terms of demographics, the audience of the film skewed older and more male, perhaps because of the subject matter itself. On its premiere day, 20% of the viewing audience was comprised of men ages 50 to 64. Over the course of the holiday weekend, The Irishman's viewership did tend to get younger, but the male aged 50 to 64 demographic still represented the largest share of viewers at the end of it with over 15%.

Below are some key insights that highlight the viewership of the film. Please feel free to write about these insights and share with your readers, sourcing back and linking to "Nielsen" if possible! 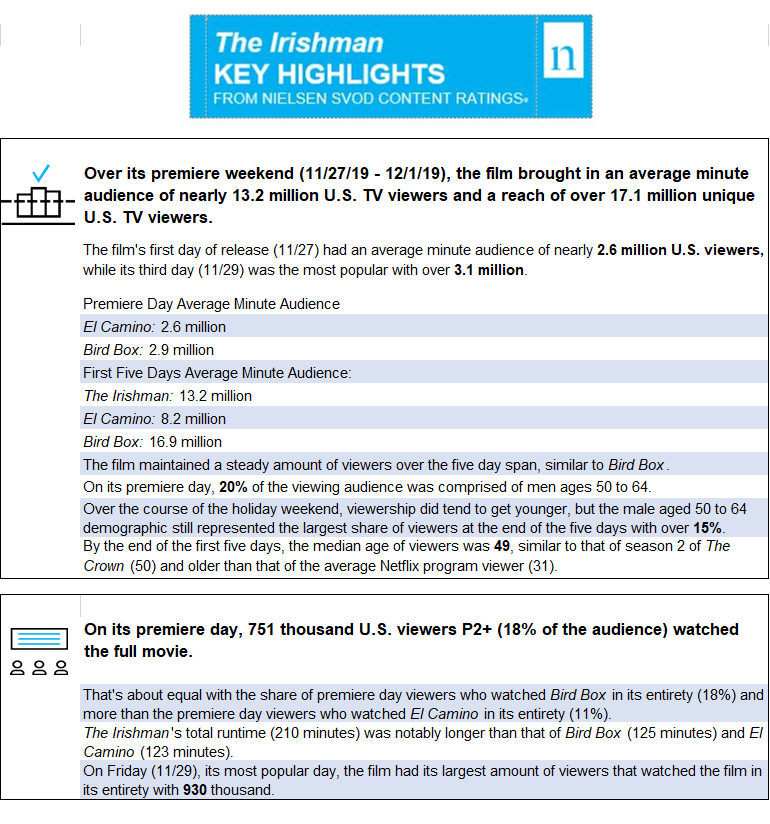 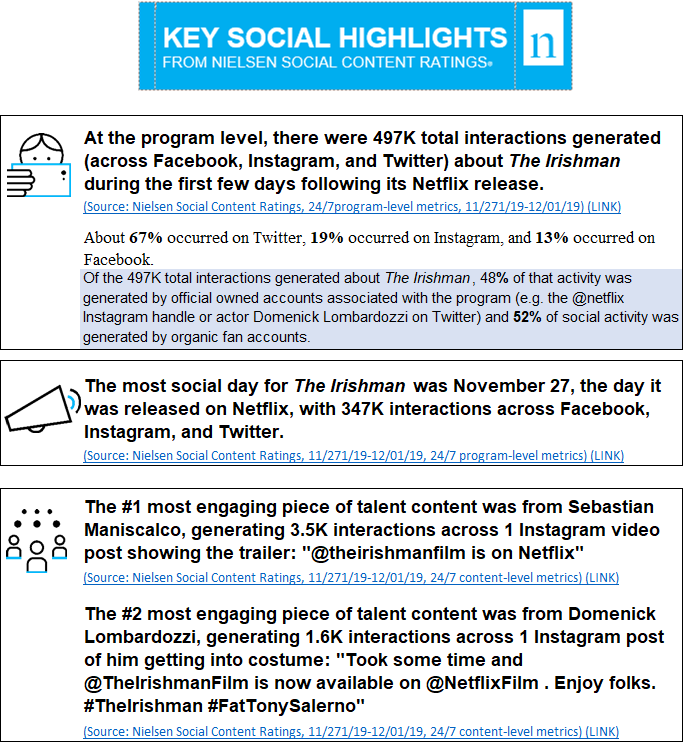