Not at CES: Google & Amazon Invest in Robotic Drones

At this week's annual Consumer Electronics Show, there will be little acknowledgement of the fledgling commercial drone business, a topic I originally reported on in 2012 and again in early 2014 . Robotics are continuing to find their way into every imaginable technology with limitless applications, some easily understood, some with great controversy and debate. One of the most popular high-tech holiday gifts was hobbyist drones, which come with instructions but should also include legal requirements. A recent episode of Comedy Central's South Park featured hobbyist drones and suggested that drones, which are mostly unregulated, could become as popular and ubiquitous as small battery and gas powered model airplanes.

While robotic drones are best known for their military purposes and they already are becoming relevant for journalism, Google and Amazon are investing heavily to establish drone technology for e-commerce marketing. Hobbyists and journalistic operations are equipping non-manned flights with cameras, listening devices and other digital applications. The opportunity is confronting all news operations, and the costs required to invest in drone coverage will further benefit high tech deep-pocket companies such as Google and Amazon (Washington Post), while also advancing their commerce management capabilities. Google announced its ambitious drone program, called Project Wing, last week. Google reports that test flights in Australia delivered a first aid kit, candy bars, dog treats and water to two farmers after traveling a distance of just over a half mile. Google reported that a team headed by Massachusetts Institute of Technology aeronautics professor Nick Roy has already devoted two years working on Project Wing.

Google and Amazon will need government approval to fly commercial drones in many countries, including the U.S. Amazon last month asked the Federal Aviation Administration for permission to expand its drone testing. The FAA currently allows hobbyists and model aircraft makers to fly drones, but commercial use of drones or any aerial technology is still banned. 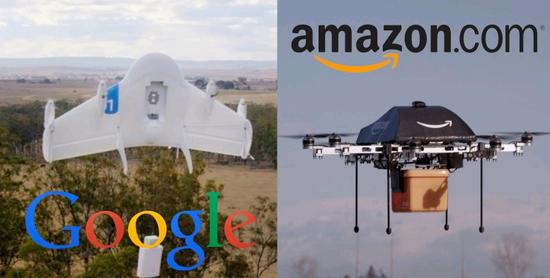 "Self-flying vehicles could open up entirely new approaches to moving goods, including options that are cheaper, faster, less wasteful and more environmentally sensitive than what's possible today," Google said in a press release.

Amazon's investments in drone technologies can be expected to be applied to Jeffrey Bezos' journalistic interests along with the more profitable commerce applications. Journalism is attracted to all technology that has digital abilities to collect data and capture rare footage at a low cost. Journalism schools are developing Drone Journalism Labs to explore how remote controlled flight technology can be used to cover any dangerous or inaccessible zone.

In Africa, self-made flying drones have begun to revolutionize reporting in the Project African SkyCAM. Their mission, to establish Africa's first flying drone journalism team in Kenya. The use of camera-equipped balloons and inexpensive handmade flying drones are helping mobilize African media unable to afford helicopters for covering hard to access terrain. Examples of drones used officially or unofficially include rescue operations and remote environmental pollution crimes exposed. The U.S. used drones to search for survivors after the Haiti earthquake, and were also used to drop medications and supplies while keeping a visual look-out, protecting troops from ambush.

A rancher in the mid-west was flying a drone in the hills and canyons and spotted deep red staining in a river nearby. It was found that factories far out of the reach of civilized scrutiny had been illegally dumping toxic chemical waste and animal blood into clean river environments without any fear of detection.

Even Google has recently declared drones an environmentally conscious methodof moving things around faster and more economically. They have been building a fleet of delivery drones for their web site customers for two years. More examples of drone-based journalism include:

There is a distinct difference between safe coverage utilization over a war zone, locating earthquake or super storm victims, and paparazzi photos, (though the 400-feet above-ground invasion may be considered less invasive to public targets). Invasion of privacy laws are sensitive boundaries and the decisions journalists make on how to use drone technology will mold regulations and restrictions for the future. But journalists and paparazzi have proven to be far less sensitive to public scrutiny of their actions than even the military. Being first on-site, advanced investigative journalism, and sensationalistic exposure of celebrities, politicians and other public figures are far too tempting to be restrained by legal or ethical boundaries. The FAA is so far hesitant to draw any official line that definitively addresses the scope and consequences of using unmanned aircraft as news gathering devices. As journalists begin using their own drones for reporting, the Society of Professional Drone Journalists has been organized and has proposed self-regulation.

The Federal Aviation Administration is partnering with the Association for Unmanned Vehicle Systems International, Academy of Model Aeronautics and the Small UAV Coalition to make sure everyone who flies an unmanned aircraft system (UAS) is familiar with the rules of the air. The FAA has created a short safety video, Know Before You Fly, to educate model UAS users.

The question is whether the traditional guidelines of journalistic relevance are relevant when technology creates such an abundance of opportunity. And the commerce applications of Amazon and Google will most definitely be used to advance their journalistic interests as well.