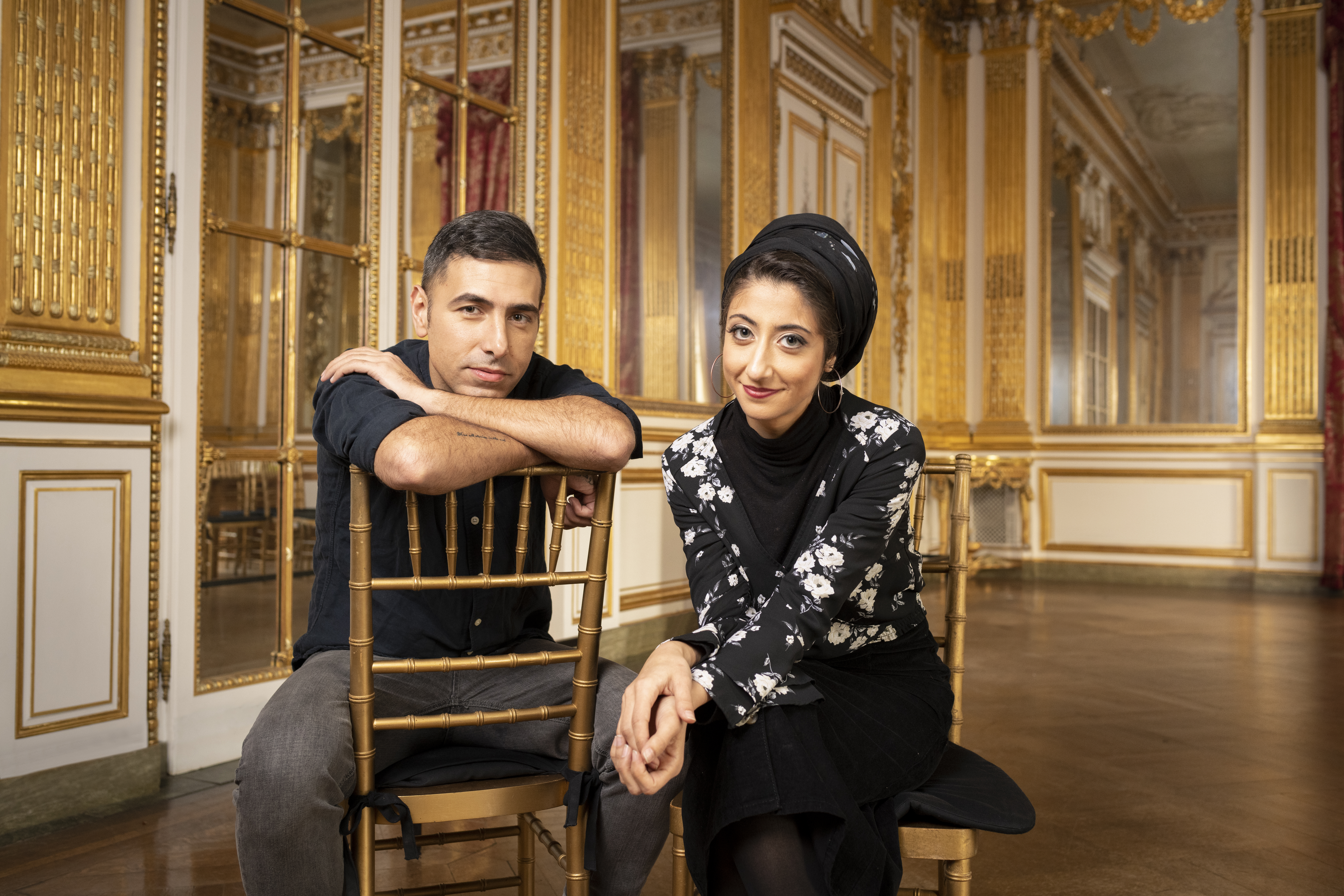 On NPR's history podcast Throughline, co-hosts and producers Ramtin Arablouei and Rund Abdelfatah (both pictured at top) dig into the back story behind current events and hot topics. But this isn't anything like your high school history class.

"History is often taught through facts, numbers and dates," explained Arablouei. "We try to do the opposite and tell history through a story or narrative."

While the podcast marketplace is rich in genres like news, true crime and comedy, Abdelfatah said history is a void. While some shows dipped into American or foreign affairs, she said none of them tackled current affairs or big topics, and they failed to provide background or context. She also felt there weren't enough podcasts that innovated with sound and style.

"We wanted to push the bounds and create a documentary feel that is super immersive and bring to history something that others were bringing to science, fiction or true crime," Abdelfatah explained. "Podcasts don't have to be two people talking on a mic."

While many Americans are discovering podcasts, Arablouei and Abdelfatah are podcasting veterans, with several years of experience producing shows. Abdelfatah first joined NPR as an editorial intern in 2014 and worked on the NPR Politics podcast, Hidden Brain and Invisibilia. Arablouei's background is in sound engineering and composing, and he created the theme music for several popular NPR shows.

The duo first met in 2015 in NPR's Washington D.C. headquarters. They were part of the launch team on several now-hits, including How I Built This and TED Radio Hour. Through these early projects, they earned a crash course in development, research, and testing. They leveraged those experiences to build their own show, which is now one of NPR's fastest-growing podcasts.

"We know you need a certain number of listeners to stay alive and be sustainable. We had been there on ground level on now majorly successful podcasts," Arablouei said. "We understood the business of it, what it meant to create something, and how to fill a gap in the market."

Throughline combines creative storytelling with innovative production. The hosts said each episode has its own rhythm and style. Some feature historians or witnesses to history sharing their accounts with minimal input from the hosts, while others have them playing a prominent role, such as when Abdelfatah travelled to Costa Rica to report on the history of the banana industry.

When they first pitched Throughline to the NPR podcast brass, Arablouei and Abdelfatah waited six months for an answer. Undeterred, they spent nights and weekends developing a pilot, which traced the history of conflict between Sunni and Shia Muslims. This topic is particularly salient because both hosts are of Middle Eastern descent; Arablouei is of Iranian descent and is Shia, while Abdelfatah was born in Saudi Arabia and is Sunni.

Nearly two years later, that episode, titled War of the Worlds, remains one of Abdelfatah's favorites. "When our show is at its best, it challenges assumptions and brings these stories to life," she said. "That's what we're trying to do in every episode, to interrogate the things we kind of take for granted as truth or reality."

While dozens of news podcasts tackle the daily news, Throughline tries to provide perspective. For instance, after the killing of George Floyd by a Minneapolis police officer, Throughline examined the history of policing in America. "We want to bring something to the conversation that isn't just repeating," Abdelfatah said.

With any episode, Arablouei said they need to provide an original angle to get listeners to invest in listening. There's no shortage of material. "There are so many incredible stories out there," he noted. "We are always trying to find a home for them."

Recently, the COVID-19 pandemic has both inspired episodes and changed how the team works. Abdelfatah now lives in New York, while Arablouei remains in Washington D.C. Prior to the crisis, they travelled frequently between the two cities, but the team now works remotely from home, complicating communication, and production, but that hasn't slowed them down.

To continue to grow Throughline, they're steadfast on telling compelling stories and creating innovate audio.

"We want people to walk away as surprised and interested and as engaged as we were when we came up with the topic," Arablouei noted.