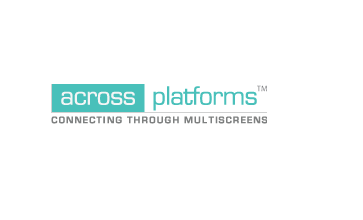 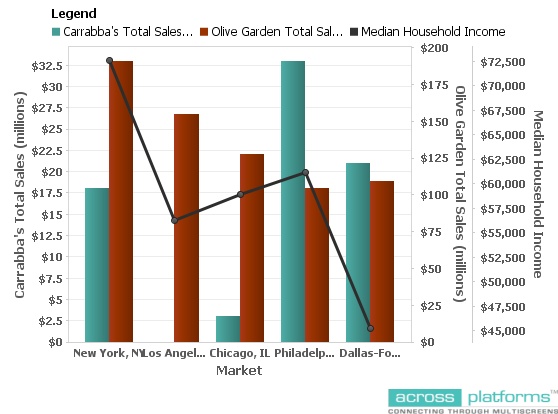 America’s leading Italian restaurant, Olive Garden, will be releasing its first new television ad campaign in ten years. According to a recent article from Restaurant Magazine , the campaign will introduce a “Go Olive Garden” tagline and illustrate how the restaurant provides a place – and many reasons – for families and friends and others to connect. The campaign, debuting October 7, and developed by Grey New York, highlights the many ways Olive Garden is evolving its food, wine, atmosphere and service to provide greater value, choice and variety.

Median Household Income: Matching the broadcast groups households to the U.S. Census Data. This includes the income of the householder and all other individuals 15 years old and over in the household, whether they are related to the householder or not.

Total Sales: Includes the sum of the average unit sales per location in each market. 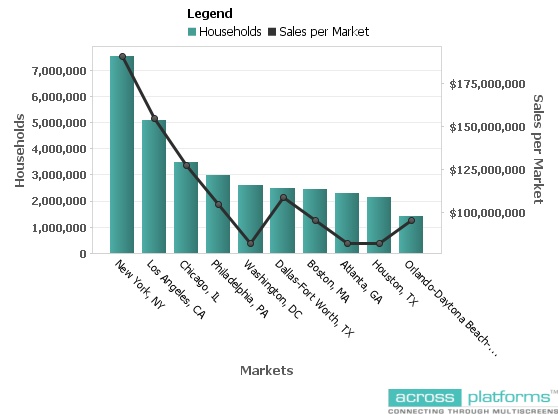 Households: Determined by matching the FCC contour maps to the U.S. Census Data county maps and then tallied on market basis.

Total Sales per Market: Includes the sum of the average unit sales per location in each market. 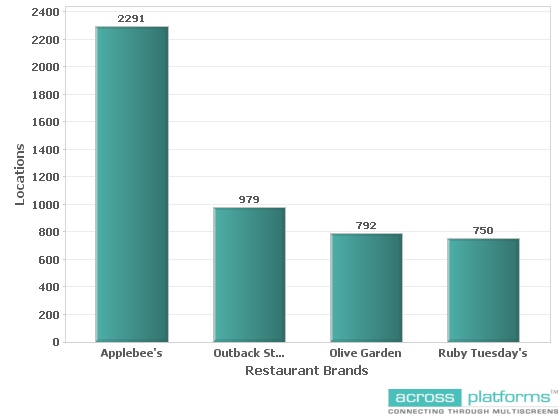 According to an article by Nation’s Restaurant News , research firm Ace Metrix conducted a study of the most effective TV advertisers in the restaurant industry. After asking thousands of survey respondents to rank brands’ TV commercials based on how persuasive and watchable they were, Ace Metrix calculated its proprietary Ace Score for each restaurant. Olive Garden ranked the highest with an average Ace score of 624. Ruby Tuesday’s received an average Ace score of 609, followed by Applebee’s with a score of 607 and Outback Steakhouse at 603. Click to View Interactive Chart

Locations: Advertiser locations are sorted by zip code and matched to markets. Location data is licensed from a third party. Data is adjusted to match the total locations reported by advertisers. 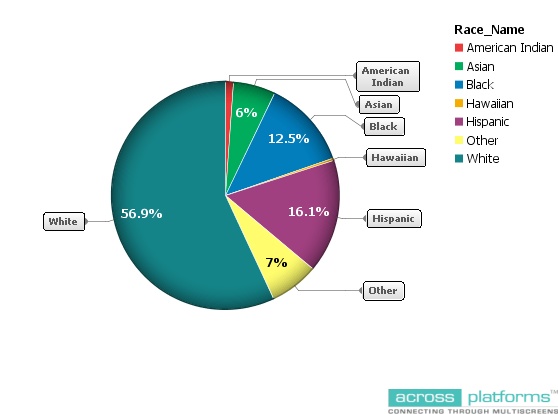 Population: Estimates are made for the United States, states, counties, places, and metropolitan areas within the United States. The U.S. resident population includes all persons who usually reside in the 50 states and the District of Columbia, but excludes residents of the Commonwealth of Puerto Rico and the Island areas under U.S. sovereignty or jurisdiction (principally American Samoa, Guam, United States Virgin Islands, and the Commonwealth of the Northern Mariana Islands). In addition, the U.S. resident population excludes U.S. Armed Forces overseas and civilian U.S. citizens whose usual place of residence is outside the United States.

How we collect our data

Across Platforms, Inc. (www.acrossplatforms.com), located in Boston, is a television services firm that provides consulting, distribution, content licensing, and application development services to marketers and programmers. The company’s free newslett…