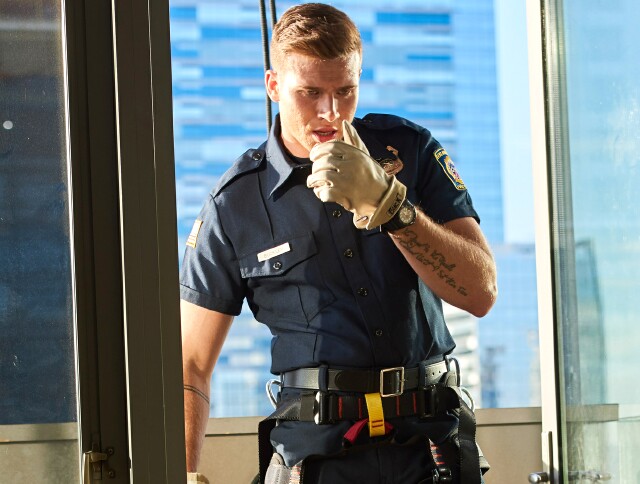 For his latest American TV role on the Fox drama 9-1-1, British born actor Oliver Stark [Into the Badlands] looked no further than his own persona to form his character.  As rogue rookie emergency responder Evan “Buck” Buckley in the hit drama from super-producer Ryan Murphy, it was apparent very early that there was more to this cocky newbie than met the eye, and Stark’s sensitive side was the key to getting a handle on him. “I'm totally emotional and I cry about stuff and I'm totally okay with that,” Stark told MediaVillage in a recent interview.  “I feel like as a young man growing up often you are told you shouldn’t be okay with that and there's a kind of toxic masculinity that comes from that; so I love being able to push the fact that it's okay to care about stuff.  Often as a young man growing up, you are told it's much cooler to not [care].

“My favorite thing about [Buck] is that he is tough and brave,” he continued.  “Yet he has a little bit of charm to him and as you go on you will see that he's really emotional, vulnerable and he's okay with that [too].  It's nice to get to play someone who is tough and cool, but then cries even though he still tough and cool.  Those things aren't often mutually exclusive.”

According to the actor, Buck’s evolution from cad to responsible first responder began in the pilot.  “I think in more standard procedurals it may take about seven or eight episodes before you started to see it,” he suggested.  “But here things move very quickly.  I think when Buck told [Connie Britton’s character] Abby she did a good job in that first episode, that was the first time you saw him humble.

“There was a line [Buck has] in the pilot, it was kind of throwaway, but it said, ‘As far as I'm concerned the world began the day I was born,’” he added.  “Toward the end of the pilot you got to see him acknowledge other people and realize that he can't do things by himself and can't do things without his captain or the other members of his team, or even without the 9-1-1 responders.  He realizes he's just a cog in a much bigger machine and it's quite grounding for him and just what he needed.  It was fun to get to do that early on and have that light and dark immediately.” 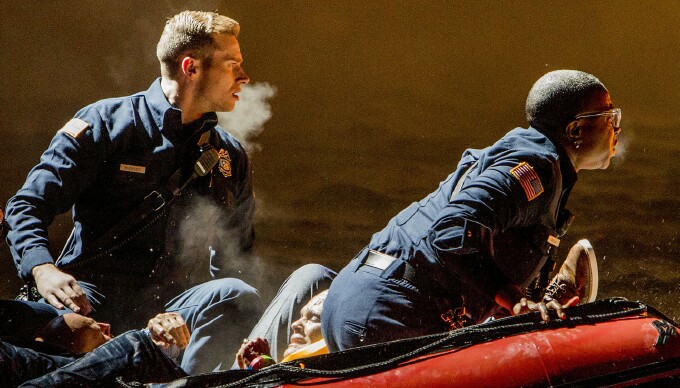 With the emotional development of his character well underway, Stark (pictured above left) turned to the physicality required for the role.  He admits to not having spent any time with real emergency responders for training yet felt it important he be at least fit enough to be believable.  “I have kind of taken it upon myself to be fit enough,” he said.  “Going onto a TV show there's a lot of pressure aesthetically to look a certain way, or the way firemen and firefighters often do, so for me it was more about, ‘Could I carry this pack on my back and run a distance?’

“I live opposite a fire station, and hopefully at some point will get to have a longer conversation with those guys,” he added.  “I actually asked them for a tour, but they are a busy fire station and they said ‘no’.  Yet, I’ve seen them giving Jeff Goldblum a tour, so I know if you're Jeff Goldblum you can have a tour.  If you're Oliver Stark, you can't,” he laughed.  “Hopefully, at some point, I'll get to do it and we'll find out if I managed to get anywhere close to the real thing.”

It seems Stark may have time to fulfill that dream.  Following 9-1-1’s strong premiere and second episode Fox swiftly renewed the series for a second season.  This affords Stark the chance to continue paying respect to the real first responders -- and show a little more skin to his new legion of fans.  “I did have to show a lot more skin [in the pilot], and that doesn't stop happening either,” he laughed.  “There will be plenty more of that to come, so there is a pressure that comes with that.

“I try not to think too much about it because I do want to play a real guy,” he continued.  “I don’t know if Buck is a guy who spends six hours a day in the gym.  I don't think he is.  I think he's as fit as he needs to be for the job and he enjoys his life.  That was much more what I wanted to focus on -- looking like a real person -- and I hope that's what we achieved.”