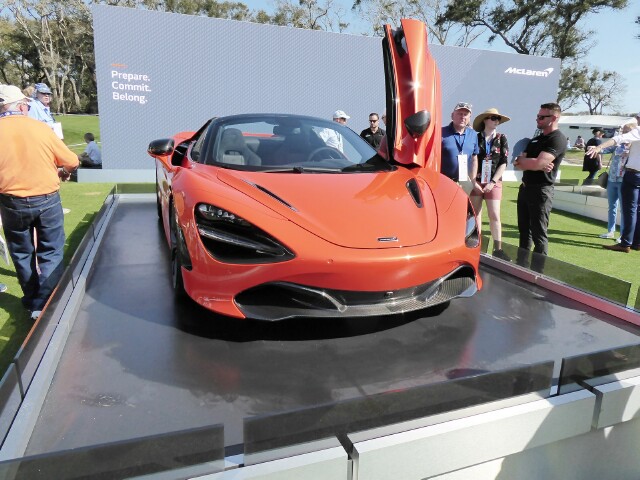 Amelia Island, FL -- The Amelia Island Concours d’Elegance, now in its 24th year, is not a classic car auction -- those occur earlier in the week, with most of the big players participating.  It’s a celebration of the best of the best in the world of vintage automobiles, but that doesn’t mean that there aren’t many commercial tie-ins.  It’s an expensive show to put on, with an effort to maximize the return for the charities that are the non-profit events’ benefactors.

Mercedes-Benz is a founding sponsor of the event and has a huge booth with catering and prime viewing of the awards ceremonies and fashion shows.  Out front this year was a row of gorgeous 500ks and 540ks from the 1930s, plus more contemporary classics.  The company reportedly spends $1 million on Amelia Island, and it gets a lot for its money.

BMW also has a big stand every year, and in 2019 showcased one of its famous art cars, in this case, a 1968 E3 New Horizon: painted by Heiner Meyer with cartoony images (including the Pink Panther). BMW has a long history, and it puts early models on stage.  A car featured recently was a freshly restored 507 used by Elvis Presley when he was in the army in Germany.

McLaren (pictured at top) and Acura use Amelia Island to give buyers who can clearly afford the cars a chance to see and sometimes test-drive the cars.  Acura even invites people with means to come out to its California test track in specially arranged programs.

Infiniti is a different case.  Danny Williams, a company spokesman, pointed to a row of the latest QX50, QX60 and QX80 SUVs (probably the only SUVs at the event) and said, “Infiniti hasn’t been around long enough to actually have cars in the show.  We’re not competing here.  But we did set up an activation and brought our top vehicles, and we can set up test drives at local dealers.  We also brought our all-electric Prototype 10 to show where Infiniti is going.  It’s been at all the major shows, including New York, Detroit, Los Angeles and Pebble Beach.”

The point, Williams said, “is to prove that Infiniti has cool cars.  Classic car owners need daily drivers for commuting, doctor visits and to take the kids to the ballgame.”

Suppliers are plentiful, too, offering restoration services, insurance and car care.  Meguiar’s is one of the latter, selling a line of high-end cleaners and waxes.  RJ de Vera, Customer Engagement Leader, says that the company maintains a road crew with eight to ten event employees.

Car care, a billion-dollar industry, cuts across class lines, so the itinerary is as likely to include a hot rod show as it is a Concours d’Elegance.  “We’re showing the flag wherever there is people with passion for the hobby. said de Vera, a car guy who is still paying off his Mercedes-Benz SLS Gullwing.  “Experiential marketing is where you meet your customers.”

de Vera said that Meguiar’s products are “usually the most premium on the shelf,” which means they are often the most expensive -- so customers have to be motivated to buy.  To that end, Founder Barry Meguiar started going to shows in the 1960s.  “All I worry about now is growing the hobby,” he told Hemmings Motor News.  “I’m not a collector of cars -- I’m a collector of car shows.”

Meguiar’s also creates tie-ins with new car launches, such as Lexus, but de Vera said such deals -- in which buyers get a “car care package” -- are difficult to arrange and often  come up.

Hagerty, a provider of classic car insurance, loves Amelia Island, and each year lines up a half-dozen classic cars for visitors to drive -- including (in my case) a Rolls-Royce.  It goes further, handing out its magazines, sunglasses and other tchotchkes, and even setting up a Hot Wheels track.  The motivation is clear.  Collectors tend to have multiple cars, rarely get in accidents and are likely to take out policies for the long term.

Another big Amelia Island supporter is WeatherTech, maker of high-quality floor mats and other products.  WeatherTech is a ubiquitous advertiser, taking out four-page spreads in auto magazines (plus smaller ones in publications like The New York Times) and touring the enthusiast circuit.

In the corners on the Amelia Island field -- which doubles as the Ritz-Carlton golf course -- were big TV monitors showing sponsor commercials.  Despite all this, Amelia never feels over-commercialized.  It’s still all about the cars.