Once You Learn This, You’ll Never Be the Same Again 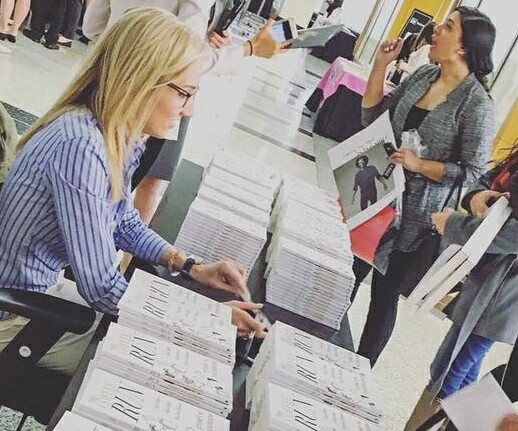 In early February I was asked to speak and do a book signing at George Washington University’s Women in Business Spring Conference (see photo above). Once I was told the conference’s theme was Limitless: Expand Your Boundaries I was excited. Very excited.

Preparing for this talk wasn’t easy. As a 22-year old about to speak to college kids, I felt that I had to straddle the fine line between speaking with authority and credibility versus speaking to them like they were my peers. I decided to reflect back on times I was truly inspired by people to expand my boundaries in an authentic, honest and non-cliched way.

I heard Anderson Cooper speak at the University of Kentucky’s #SpeakBlue Distinguished Speaker Series in 2013. In a Q&A format, Cooper spoke with such ease, humility and perfectly balanced humor.

I don’t recall every detail about his life story, but three years later, I still vividly remember his philosophy: “Never underestimate the power of out-hustling everyone else around you.” Oh, and that he rerouted his flight to make a pit-stop at his house in New York to watch the finale of “Breaking Bad” because he was so afraid that someone was going to ruin it for him between the time he flew from Atlanta to his talk in Lexington that same night.

Paul Bennett, Chief Creative Officer of the international innovation and design firm IDEO, spoke at this past year’s Louisville Innovation Summit. I didn’t just love hearing him speak because of his British accent. Bennett told stories that completely enthralled me. His descriptions, tonality and movements on stage were just as entertaining as they were motivating.

It’s not very often I can remember the very first slide of a speaker’s PowerPoint … unless it’s Paul Bennett’s.

On a stark white background in a font size well over 30 point read: Hello.

Bennett truly had me motivated at hello.

No, I never had the opportunity to hear Steve Jobs speak, but I do have him to thank for changing my life.

I read the following quote from Jobs right before my first internship in New York City and ever since then it has been my motivation behind every risk I’ve taken: “Life can be much broader once you discover one simple fact: Everything around you that you call life was made up by people that were no smarter than you. And you can change it, you can influence it … Once you learn that, you’ll never be the same again.”

Combine Cooper’s drive, Bennett’s creativity and Jobs’ rationalization that everyone has limitless potential if they just take that first risky (and uncomfortable, and uncertain and sometimes very scary) step and I had more than enough inspiration for my talk.

Yet I took a pretty big risk the morning of my presentation because one other person came to mind.

I scrapped the whole thing an hour before my talk and felt an overwhelming need to start off my presentation by playing Bryan Johnson’s OS Fund video. And it was awesome.

The rewards from taking a risk begin the moment you feel fear transition into an ounce of certainty you didn’t have before. You can either spend all of your time preparing for a safe and expected outcome through predictable, low-risk actions or you can face fear head-on, go with your instincts, learn from fear, and embrace the uncertainty.

Once you learn that, you’ll never be the same again.