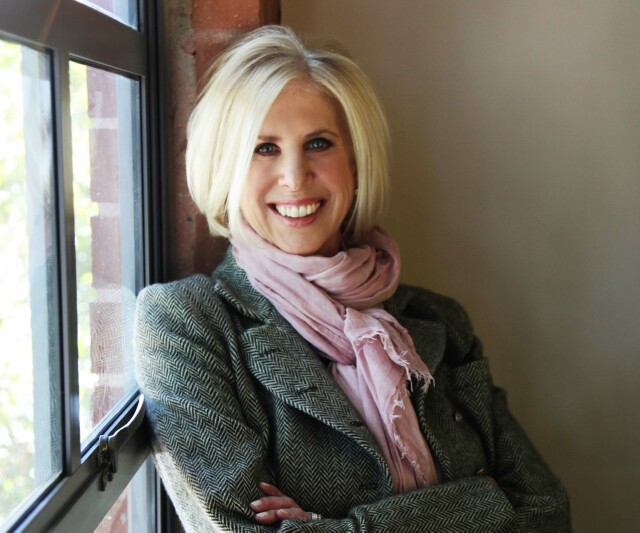 When a recent screening at Carnegie Hall of the Lifetime movie Patsy & Loretta  came to an end, no one clapped harder or seemed happier than its director, Callie Khouri, also an executive producer.  Premiering on October 19, the film charts the brief but rather extraordinary friendship between country music legends Loretta Lynn and Patsy Cline.

“It wasn’t a long friendship, about a year and a half,” Khouri (pictured at top) had explained to MediaVillage last summer during an interview at the annual Summer Television Critics Association tour.  But it was memorable and powerful.  "They saw themselves in each other,” Khouri said.

Patsy (Megan Hilty, pictured below right) -- ambitious, confident and already a rising star -- invited Loretta (Jessie Mueller, below left) to visit her when she was in the hospital, recuperating from a car crash.  (You can read Steve Gidlow's interview with Hilty and Mueller about the making of the movie here.)  Loretta was singing at dive bars, where no one listened, and in her kitchen, where she listened to her domineering husband.  She adored Patsy as a fan does a star, but when they met, a true friendship developed, albeit a relatively short-term one. 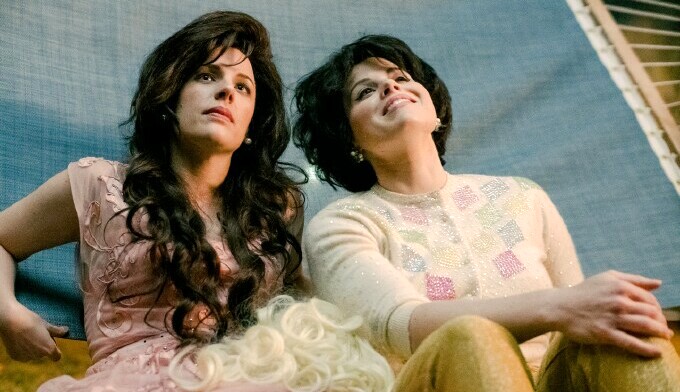 “I love telling stories about women that are different and still find a way to have a friendship that obviously is as deep and lasting as -- well, unfortunately, this wasn't as long-lasting as it should have been,” Khouri said while at TCA.  “But that’s kind of what I started out doing, and I just love telling those stories, because I have a lot of those kind of friendships with women that are very different than me.  We kind of draw on each other's strengths and make up for each other's weaknesses.”

This movie was written by Khouri’s stepdaughter, Angelina Burnett.  (Khouri is married to the Grammy-winning music producer T Bone Burnett.)  Angelina told her, “I have written this script about Patsy and Loretta for Lifetime, and I think you’d be great for it,” Khouri recalled.  “I read the script and loved it.  It was right up my alley.”  No surprise there.  Khouri famously wrote Thelma & Louise -- one of the finest films about female friendship ever produced -- while breaking into the business.  She later won an Oscar for it.  And she was the creator of and creative force behindNashville,that rarity of a TV series with plenty of great music and high drama, which also had an intense relationship between two talented, hard-working female country music stars at its core.

A theater major at Purdue University, Khouri worked in children's theater in Nashville, and then headed to Los Angeles, where she studied acting.  While there, she realized, "I didn’t want to [act].  I took a job as a receptionist in a production company.  I was a runner, a PA.  I worked my way up.”

During this time, “I got the idea to write Thelma & Louise and wrote it in longhand, in a spiral notebook,” she recalled.  To this day she remains delightfully, unabashedly feminist.  “My overall philosophy is to tell stories that are true and that help women,” she said.

Not many people know of the beautiful friendship between Loretta Lynn and Patsy Cline.  Khouri’s takeaway from the movie is that the two women “had to fight really hard for their place in the business, to get half a chance.  They went out and made the opportunities themselves.”

In that regard, Khouri believes Hollywood is finally changing, though very slowly.  “There are glaciers melting faster than Hollywood is changing,” she said.  “But it is happening.  I think we are at a really interesting moment.  We are demanding things change.  A lot in our society does not work.”

With an Oscar, a Golden Globe and a WGA award, when did Khouri feel she had made it?  “Never!” she exclaimed.  “You are always trying to get better.  I still don’t feel I have written the best thing.”  Thelma and Louise, she added, “is the truest thing I have written for me.”

Patsy & Loretta will be televised Saturday, October 19 at 8 p.m. on Lifetime.