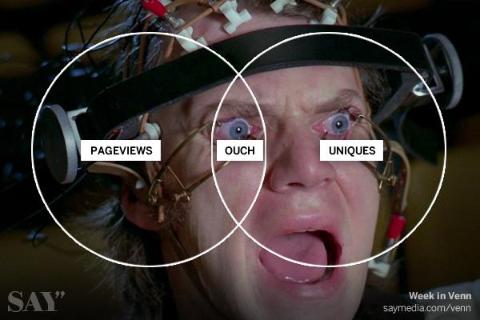 You try to frighten me. Admit so, sir. This is some new form of torture.
- Alex in Stanley Kubrick's A Clockwork Orange

For the last 10 years, media watchers and content creators have been talking about how consumers are time-poor, and advertisers have to fight that much harder to get the attention of consumers. And yet media is not sold based on how much time people spend engaging with the content. I'm not talking about buying a 30-second TV spot, or a 15-second radio ad here. I'm talking about people reading an article and taking the time to comment on it or share, people playing a game and posting a high score, or watching a video – again and again.

Advertisers are still, despite all the research into online habits, buying into supposed impact strategies. The worst of these are homepage takeovers (often found on content site homepages – the traditional portals and media properties). Never mind that the average time spent on these content pages can be fractions of a second. If you go to MSN's homepage, you're probably there to go to Outlook (formerly Hotmail), similarly with Yahoo! or AOL. If you're on a showbiz gossip site like MailOnline, TMZ or DigitalSpy, you're busy scanning down the page for headlines or images that catch your eye.

And this is where the false logic of numbers comes into play. The unique visitor scores for these kinds of home pages will look reassuringly high, even though there's little quality time spent with the content. Advertisers like the idea of a campaign that's "impactful" (even if it isn't a real word), and by "impactful' they mean big."

'Impact' and 'big' have, in the online display world, become dangerously interchangeable, and more often than not it simply means three pieces of repeated creative on the same homepage. There's still a lot of stunt display stuff that goes on – but these stunt ads are rarely user-initiated and are often viewed negatively by the consumer. Yet the perceived wisdom is that this style of advertising is somehow more effective. But why is so little value attached to how long people spend with the content?

This comes back to display advertising's roots. When it was purely about direct response, it didn't matter someone spent 0.2 or 20 seconds with an ad, provided they completed the action. But today the sophistication of online content environments, including ad unit technology and audience targeting, means that there are massive opportunities here for online advertising to become a valuable part of any branding exercise.

The reason we talk about Point-of-View publishing here at Say Media, is because it represents the value that lies in premium content. Premium content creates an engaged readership – which by extension makes for better advertising opportunities. When we talk in page views and uniques alone, we ignore the magic at work in the editorial offering and the relationship that a content property has with the reader. It's also interesting to note that ad-supported content online is deemed wholly acceptable by the Internet public. A recent U.S. poll showed that 92 percent of those surveyed felt that free content was 'very' or 'somewhat' important to the Internet, and 75 percent of the same sample said they preferred an ad-funded model.

But if that sounds a bit too woolly, it's interesting to see that even the money men, who as a group are well known for appreciating cold hard numbers, are starting to move beyond the clicks and views as well. Andreessen Horowitz, a leading venture capital firm dubs page view and uniques as 'bullshit metrics', preferring instead to look at measurements that reflect engagement and retention. Firm partner Marc Andreessen recently called upon other investment companies to get more vocal and demanding, and not be " bamboozled with the biggest numbers they can find , regardless of whether they correlate to success."

Of course the danger is that we start looking for metrics that aren't appropriate in a desperate attempt to measure something other than monthly uniques. Social media scores are, on the face of it, a decent indicator: 89 percent of marketers judge the success of their campaigns by the amount of social media engagement . But pins, likes and retweets are only valuable if they extend the core message. If your ad has achieved popularity on Twitter, is that because you've created an astonishing piece of content – or made a gaffe? Are they laughing at you, or with you? If a particular social media channel was a target, then obviously the sharing numbers in the channel become important, but if you're looking for extra credit, then prepare to be disappointed. If you're looking for social media success, then you need to be running a dedicated social media campaign - these things don't just happen.

Returning to Marc Andreessen's point about being more demanding as a client: It's remarkable to anyone who understands engagement that anyone would continue to view these older metrics as the final word on the matter. They come from an age when creating a piece of content and putting it online was in itself an achievement, but online media is so much more exciting, compelling and meaningful today, surely we have an obligation to find a measurement model to match it?

Paps Shaikh is EU General Manager for Say Media and is based in the UK. Follow him at @papscallion