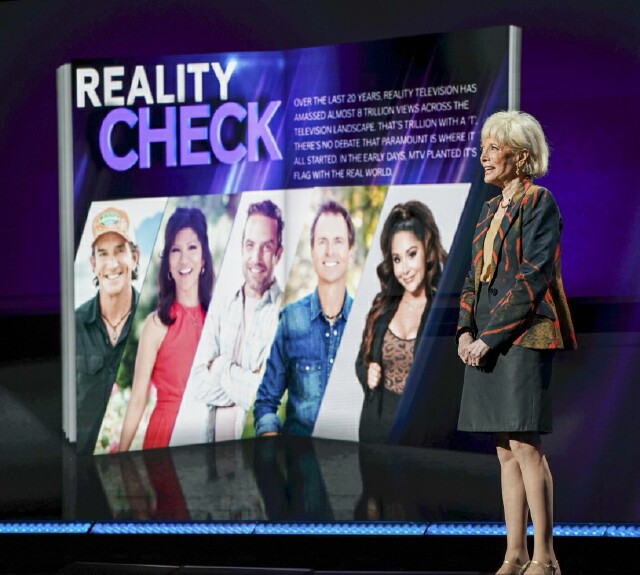 Hundreds of media and advertising executives came to Carnegie Hall Wednesday afternoon to see the first-ever Paramount Upfront event. For years, this world-renowned center of classical and popular music performances was home to the grandly produced annual unveiling of CBS' primetime lineup for the upcoming season.

The Big Message: With a catalog of broadcast, cable and smart TV product-distributed services, and megacontent offering Paramount+, Paramount has the scale and expertise to give advertisers more consumer bang for their campaigns. In the coming year, all the company's platforms will expand and deepen their ability to offer relevant content for truly diverse audiences.

Host: Jo Ann Ross, Paramount's President and Chief Advertising Officer for U.S. Ad Sales. Her promise to the audience on hand: "We want to make you think, make you laugh and make you aware of all the exciting developments happening here." Ross kept the proceedings lively and inventive.

What Worked: Having the presentation play like a special episode of the award-winning CBS News magazine 60 Minutes, complete with its roster of correspondents introducing and reporting various segments. (Lesley Stahl is pictured at top.) Content diversity was a running theme, from Scott Pelley's overview of Paramount's efforts in that area to Norah O'Donnell's profile of Tyler Perry and Bill Whitaker covering "Content for Change," which started as a BET outreach and now involves every TV venture at the organization. Yes, that iconic ticking stopwatch surfaced time and again to let attendees know the time remaining in Paramount's big show.

What Also Worked: The cast of rookie CBS comedy hit Ghosts -- in character -- singing and dancing about their desire to be in aHamilton-like Broadway musical (pictured below). Clever and enjoyable all the way through. 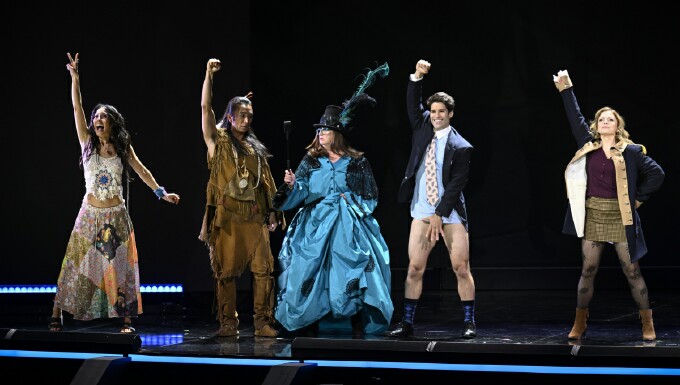 What Didn't Work: That intrusive music accompanying a segment with Kevin Costner and cast members from Yellowstone and its various spinoff series.

Bonus Points: Nice barbs from CBS' late-night hosts, with The Late Show's Stephen Colbert early on and The Late Late Show's James Corden near the end. "Give me COVID once, shame on you. Give me COVID twice … please stop giving me COVID," noted Colbert in reference to his recent second bout with coronavirus. "Jimmy Kimmel knows what I'm talking about. You stole my bit, Jimmy!" Corden's focus was on content. "We've had more storylines about the FBI then they have at the actual FBI," he went on. "I can't wait for the next [Yellowstone] series—1997. It's mostly Kevin Costner roller-blading."

Data Points: Multichannel bundle Pluto TV, which was barely mentioned during the presentation, is the top-rated free smart TV-distributed platform with more than 68 million monthly users and more than 330 channels. Unscripted competition series on CBS, Paramount+, MTV and other ad-supported services collectively reach 83 million unique viewers. CBS maintained its status as the leading broadcast network [in viewership] for the 14th straight season, and 19 of the last 20 seasons.

News: Three new hour-long dramas and an unscripted series will launch on CBS' primetime schedule this fall. Private detective procedural So Help Me Todd begins its run on Thursday nights, withFire Country showing up Friday nights and police saga East New York on Sundays. Real-life romance aboard a luxury cruise ship unfolds Wednesdays on The Real Love Boat. An adaptation of the movie True Lies and a new round of Lingo with RuPaul Charles hosting will be among the midseason series attractions. New series coming soon to Paramount+ include horror saga Wolf Pack, Tulsa King starring Sylvester Stallone and the long-awaited revival of Beavis and Butt-Head, New animated series, DIGIMAN! about a cool group of archaeologists will show up on Comedy Central.

Parting Words: "It's a challenging time, but we as Americans are continually reaching for progress." -- 60 Minutescorrespondent Scott Pelley

"This genre is going to outlive all of us." -- Survivor host Jeff Probst

"Make sure you have a good team. A good team is really important. Have the right bodies in the right seats so we can carry on." -- Tyler Perry on what it takes for him to oversee so many series for BET, BET+ and Paramount+

"Watch me ascend!" -- Nicole Byer, making yet another of her 2022 Upfront event appearances this week, playing the Paramount-logo-inspired pseudo-game show Climb That Mountain!