Paula Newsome Might Be New to "CSI: Vegas" But She's No Stranger to the Franchise (Exclusive) 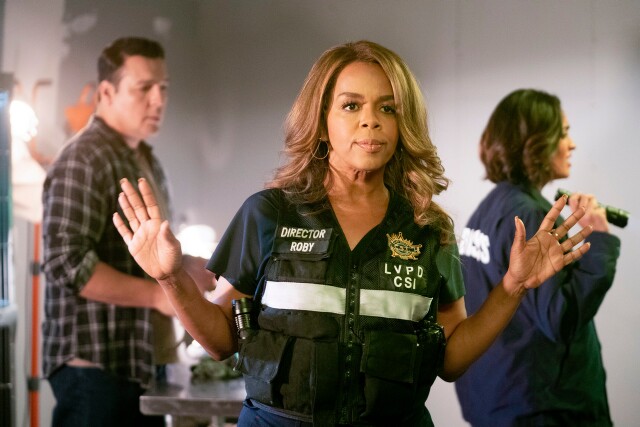 CSI: Vegas returns to CBS this week for a second season. Its first saw a few familiar faces reprising roles from the original, including William Peterson returning as Gil Grissom and Jorja Fox as Sara Sidle. With those characters not returning, another familiar face joins the Vegas fold when Marg Helgenberger reprises her Emmy-nominated role of Catherine Willows. She'll join Paula Newsome (pictured above) as Maxine Roby, leader of the Vegas team, who was introduced last season.

"The response to Maxine was kind of amazing," she beamed during an exclusive interview with MediaVillage. "To be honest, the first couple of days [filming] season one I was nervous. Sitting there looking at Billy and Jorja … Jorja is just like a big warm blanket, and Billy is Grissom! It took me a little while to get my legs, but then it was like, 'What am I doing? Paula, this is what you do. Cut it out and just do it!' The beautiful thing was how [the fans] love Max, and that means everything."

As a television veteran, Newsome has an extensive list of credits, many within the crime and law enforcement genre. She did her time on Law & Order, but somehow managed to miss a ride on the CSI: Crime Scene Investigation mothership during its 15-year run (2000-2015) that launched the popular franchise. Turns out that just because the show isn't listed in her credits, she's not a complete stranger to the series. "You know what, I'm gonna tell you something," she laughed when quizzed on the subject. "What happened was, back in the day, I was doing a television show called The Lyon's Den, and one of our directors, who had done a lot on CSI, came through. 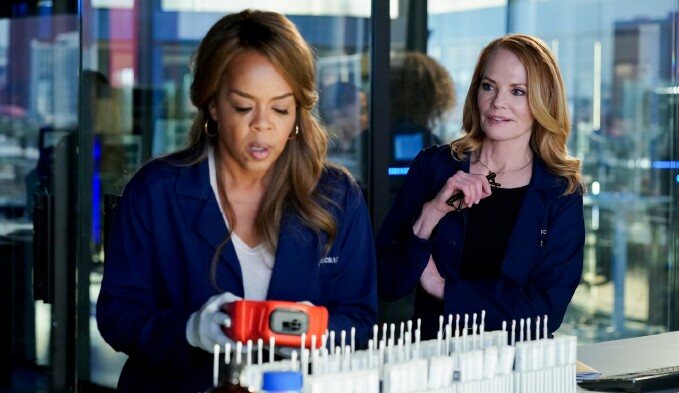 "He was like, 'There's a great role for you on [CSI]'," she continued. "I was like, sure, sure, so I went and shot a scene with Marg (Helgenberger, pictured above right). But the lines just wouldn't stick. Sometimes the lines just don't work. They replaced me, and I wasn't surprised. So, this is actually my second time on CSI -- kinda. When it was announced Marg was returning, we met on Twitter and she said, 'I look forward to working with you again.' She remembered doing something with me, but she didn't remember what it was. She's done like 5000 CSIs and worked with thousands of characters. I was like, 'No, please don't let that be what you remember!' I was hungry, so I suggested food. We got together, had a meal, and it was lovely."

While Newsome was thrilled to land the role of Maxine, she doesn't credit herself as an avid viewer of the original series. "I was coming out of a workout class," she recalled of landing the part. "I'd gotten a bunch of calls, so I called my people and they said, 'You're on CSI: Vegas!' I knew it was a good thing, but I was living under a rock, and I wasn't one of those people who really watched the first incarnation. But my sister … When I told her about it, she was like, 'Yeah, yeah, is Grissom coming back?' It was all about Grissom!"

Having played a variety of detectives and police officers in the past, Newsome can't help but see similarities between previous characters. There's one, in particular, she feels shares a lot with Maxine. "I guess the one closest to her is Janice Moss on Barry," she reflected. "But Max is more of a mama bear than Janice was. Max has more of a sense of humor than Janice, but energetically they're similar. Every character has little pieces of me also depending on the situation. I see characters almost as a piece of film. You shine a light through that piece of film. Paula is the light, and the character is the film. I just try and bring a lot of honesty to each situation."

She also admits there are a few traits of Maxine she's happily embracing. "I'm the youngest of three girls, so it's cool being the boss," she laughed. "My sisters were so bossy, and my big sister still is. We have an episode coming up where Maxine is in harm's way. I've never thought of myself as being a method actor or anything like that. But that was challenging, and I had to spend a little energy shaking that off, so [Maxine] is rubbing off."

With 21 episodes greenlit for season two, Newsome will have plenty of time to walk in Maxine's shoes. "When they told me it was 21, my eyes were a bit wide. But as we do it, it's so much easier. Jason Tracy, our showrunner, has really tailored each of these characters to the actor's portrayal. So, you get used to saying things like, 'Mononucleic acids.' Saying the words comes kind of easy as I'm a bit of a wordie and speak a couple of languages. Remembering them is hard and a whole other thing."

Newsome isn't spoiling anything about the season ahead, except to say, "You get to see just how smart these people are by what they figure out." As for another 15-year run, she's all in. "This show could go as long as CBS and Jerry Bruckheimer want it to go," she offered in closing.