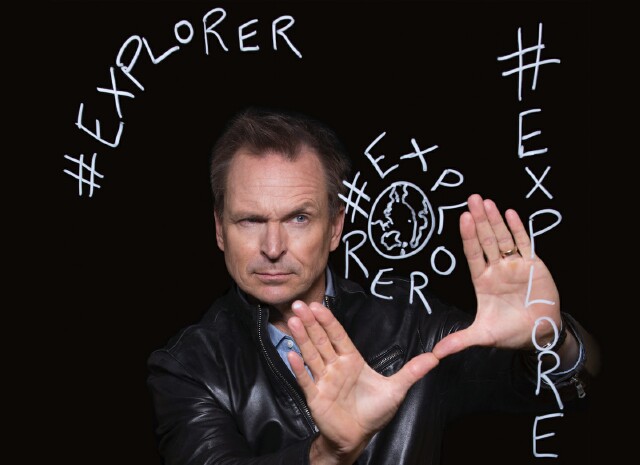 He’s racked up more frequent flyer miles than most seasoned travelers hosting CBS’ The Amazing Race, but anyone who thinks Phil Keoghan is all traveled out should think again.  Despite having 30 seasons of Race to his credit (31 if you count the one he just completed that is still to air), along with umpteen-thousands of global trekking miles covered via other pursuits, receiving the offer to host National Geographic's Explorer was the chance to fulfill a decades-old dream.  "When I first moved to America from New Zealand as a young host, I started looking at all the shows I would like to work on or work for," he explained during an exclusive interview with MediaVillage.  "The show I zeroed in on was Explorer.  As soon as I hear the theme music it's sort of like what The Amazing Race theme has become now.  I immediately think of traveling, adventure and exploring.

"In 1992 my wife and I had shot a pilot for an adventure show and one of those stories was tracking the elusive Floridian panther through the Everglades,” he continued.  “So, when I saw Explorer I cold called the producers in Washington, D.C., and pitched that story to National Geographic along with some other ideas. They wrote this lovely letter back, which I still have, and it says, ‘Thank you so much, [but] in order to do it, this is the format the story would need to be written in and [this is] how to do the pitch.”

The pilot was sold to a distributor, but Keoghan’s original pitch never did make it to Explorer, until now.  “The craziest thing happened,” he explained.  “The executive producer and I got together to talk about possible stories and I was told the first trip I would going on would be to the Everglades to track the Florida panther!  I went back and we shot a piece in which I retraced tracking the panther after 25 years.”

Explorer isn’t Keoghan’s first outing for National Geographic.  Last year he and Jane Lynch hosted the groundbreaking and ambitious Earth Live, a two-hour global simulcast that was telecast live on National Geographic and Nat Geo WILD in 171 countries and 45 languages.  It was that experience which opened the door to Explorer.

“That was a big deal and went really well,” he recalled.  “They approached me to say Explorer was being revamped and would I like to be a part of it?”

For Keoghan, the motivation for joining Explorer was storytelling.  “There are few places on TV now where you're given an opportunity to tell stories like this,” he said.  He’s also excited about how the revamped format of the series allows him to do that.  “I’ll host the show and be on my own adventure that's threaded throughout the show,” he revealed.  “My adventure starts at the beginning of the show and ends at the end.  Throughout, you'll come back to me as I introduce various world-class correspondents telling their stories.  Instead of being in the studio doing introductions, I’ll have my own adventure.”

New Zealand native Keoghan told me his love of travel started at the age of three, traveling with his scientist dad and music teacher mom as they made a home in the Caribbean for eight years, followed by Columbia, Canada and Australia.  Yet, unbelievably, there are still a lot of places he wants to visit.

“I have a list of places on my bucket list,” he said. “I've always tried to find a way to work in places that I haven't been to, like Antarctica.  I've had four trips [scheduled for] there since 1986 that were canceled for various reasons.  So that's a country [still] on my list.  It's definitely a motivation for me.  I've been so lucky to go to places like India; but I've been there so many times, maybe 20 in my career.  I don't know how many times I've been to China.  It’s not that I don't love to go back, but there's something cool about going to a place you've never visited.  I can say I've been to every corner of the globe, just not every single place.”

As for The Amazing Race, Keoghan has no immediate plans to “Philiminate” himself from that show.  “We went to one season a year as CBS tested some new reality-based shows,” he explained.  “But Race did really well in its last timeslot and is a tried and tested format, so I think we'll probably go back to two a year.  The Amazing Race has always been my first priority.  We normally shoot that in June, and another later in the year, so I'll work the Explorer schedule around that.”