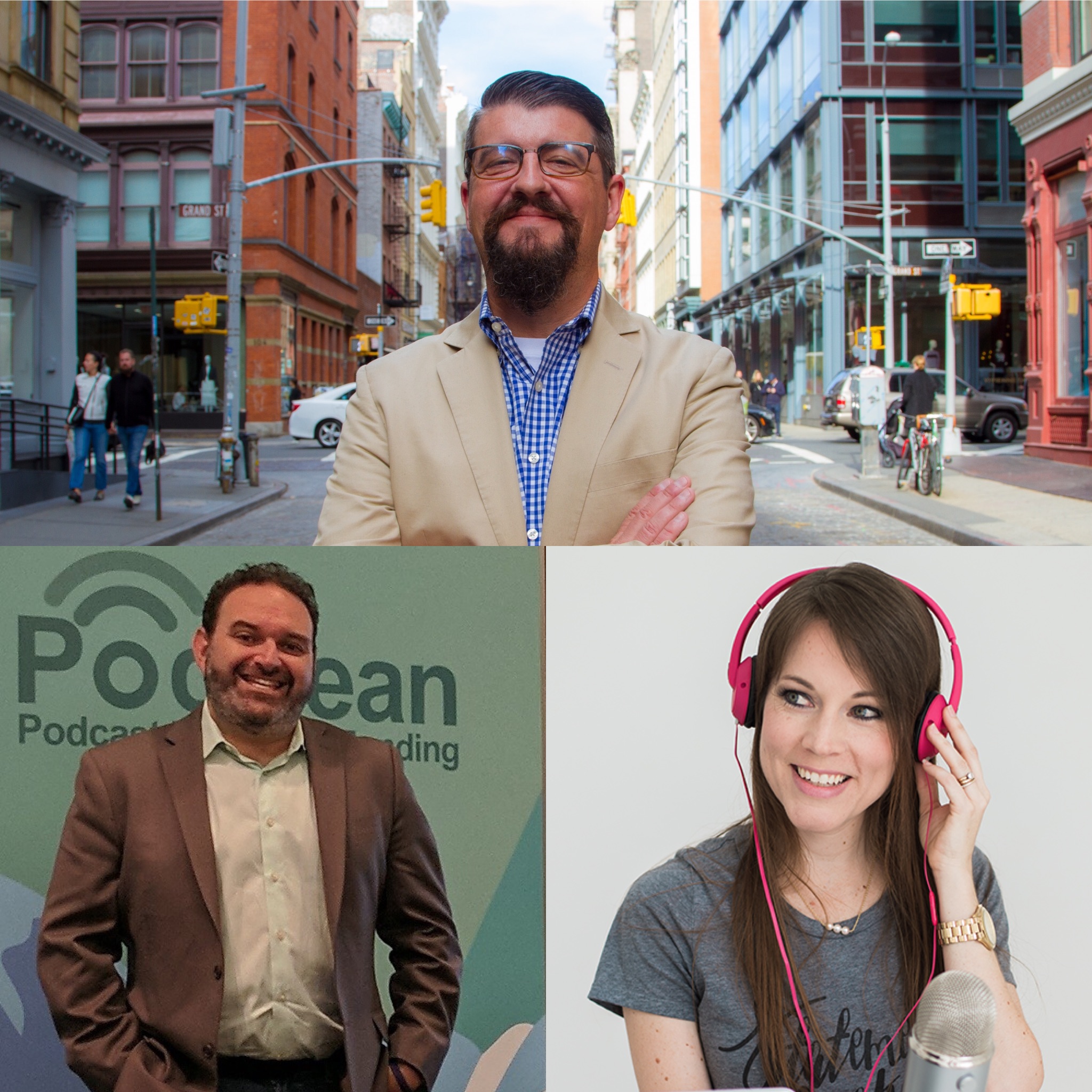 Podcast Movement in Anaheim, California celebrated its fourth year of all things podcasting, enjoying its fourth annual bump in attendance and attention, as well.  Of the luminaries in the space, this year including representation from major producers, audio tech firms and sales networks, I spoke with three (pictured above, clockwise from top): Jason Hoch, Chief Content Officer for HowStuffWorks; Taylor Bradford, host and creator of sophomore podcast, Boss Girl Creative, and Jay Green, Senior Vice President of Digital Strategy and Analytics for Cadence 13.  A summary of the interviews is transcribed below, but listen to the full insights here or subscribe on iTunes.

I spoke first with Jason Hoch, right after he left the Academy of Podcasters Awards stage, holding two statuettes.  He praised the progress of the space and monetization opportunities, cautioning at the same time that the growth of data and analytics mean that podcasters need to respect users.  “One of the things that we've seen in other digital platforms is ‘click-bait this, it’s five ads on a page, it's all kinds of things to get more traffic.’  It's a game that's being played all over the place, and I just think that if you trick users on a podcast platform, they're not going to stick to your podcast.  So, we have to be real.”

HowStuffWorks has a mission of informing and entertaining during “those couple of hours of the day when they may be jogging, doing that miserable commute or, as we often hear from a lot of our listeners, before they go to bed,” he explained, noting that early on, “we thought people only want to listen to a five-minute podcast, because they’ve only got so much time in their day.  But we were wrong on that; what people wanted is a long read for audio.  They wanted to deep dive with us.  They wanted to have that one-on-one connection and they're consuming these podcasts like mad.”

Their insights have spawned content in multiple verticals, including Comedy, produced in new L.A. offices headed up Jack O'Brien, the founder of Cracked.com.  “We've got upwards of 37 million downloads per month and people really are consuming everything that we're giving them, and so we really want to be what we call the home for creative geniuses ... so we've made a couple big moves in this space this year.” That includes bringing in Will Pearson and Mangesh Hattikudur, the founders of Mental Floss.

In terms of business opportunities and Hoch’s projections for where are things going, since “it's not a three-second Facebook video and people are spending a lot of time with us, they are actually paying attention to the ads or the commercials.  Frankly, our industry has not done a good enough job articulating what it is we do, what is our metric, what is our standard, and how do we measure cut in everything else.  We're going to see a transformation over the next 12 to 36 months,” he continued.  “Anytime you start to throw some big numbers around, that's when people start to pay attention. When you look at the agency world, you also are finding that a lot of the younger consumers of podcasts, they're the ones actually working at agencies saying we need to start paying attention to podcasts.”

Many of those thoughts were echoed in my next interview, with Jay Green, fresh from his company’s big rebranding press conference that morning, announcing a rebrand from DGital Media to Cadence13.  This podcast content firm produces the content of many of their 75 rep’d shows but has a core competency of sales and marketing -- selling sponsorships within the shows, working with advertisers, creating segments and working with their podcasters is to promote the shows.

Cadence13 has seen its tentpoles of political and sports content -- particularly those from Crooked Media shows like Pod Save America, Pod Save the World and Tony Kornheiser’s show -- growing and adding female and lifestyle podcasts, like Yoga Girl.  Green describes the through line as “really about influencers … we want people who are influencers.  Those are people that people want to listen to.”

The value of influencers is understood by the sponsors.  “This is not a 30 second pre-recorded produced ad where somebody's telling you about a feature,” Green asserted.  “This is our hosts talking about it, and when I said earlier we're looking for influencers, that's why.  This is not music, [which] tends to be a little bit more passive, it's in the background, then the ad comes on in the background, and you'll notice it and that's fine.  But with podcasting ... when I'm listening to that podcast for what Jon Lovett has to say, or Sophia has to say, the ad becomes a part of that.”  So now, he notes, they’re “getting agencies saying ‘Okay, I need you to teach me about podcasting.  I want the budget in my department.’”

Finally, for the third leg of the Podcast Movement podcast I gained insights about the evolution of a solopreneur navigating her way to success in the space: Taylor Bradford, who is the host of Boss Girl Creative -- a lifestyle-meets-marketing instructional podcast designed to help women understand how to grow their blogs!

After discovering The Pioneer Woman blog some years back, and binge-reading the entire back catalog, Bradford began her own blog and set out to learn all there was to know about the platform and how to promote it.  That led to the need to understand social media, and ultimately podcasts.  “When I started blogging, Pinterest didn't and Instagram didn't exist yet, and so these platforms came out, and it was like, "Ooh, shiny object syndrome.  Let's go see what this is all about and how it can be leveraged for bloggers, and how we can get our content out there in front of new eyeballs because we all want to grow but we can't grow without people reading."

To get started, Bradford made sure she had a good editor, because “I knew I could figure out everything else, and honestly, I just needed my laptop and a microphone, and some headphones.  I'm usually recording at 10:30 p.m. at night in my pajamas on the floor.”  That production style matched with passion and enthusiastic personality led just a couple of years later to Bradford appearing as a panelist at Podcast Movement, being included in a listing in Entrepreneur magazine of the top women-hosted podcasts, gaining representation by Jessica Kupferman’s agency and attracting advertisers.

Where does she envision herself going with this, beyond a healthy 20,000 or so listens per episode per month?  Just “supporting fellow Boss Girls ... I want to be the go-to resource for people to say, ‘Taylor is saying it straight, and this is step one, step two, step three, and I'm just going to keep going back to her because she's just sharing it all.’  I want to keep helping other female creatives have a voice.”