Profiles in Courage, Here and There 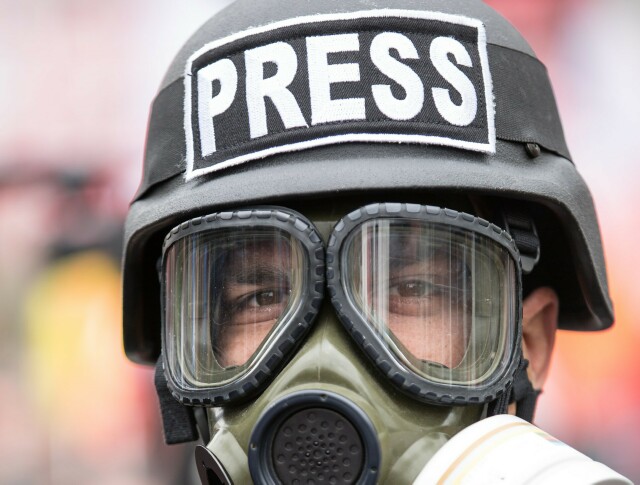 From war zones to world capitals, journalists these days literally are under the gun. The deaths in Ukraine of two Fox News reporters and an American documentary filmmaker this month tragically underscore the point. So does President Vladimir Putin's crackdown on Russian journalists whose acts of defiance, including at state-run outlets, reflect their bravery in the face of an increasingly repressive regime.

That's what makes the fabulists at Fox and elsewhere in the right-wing media-verse who are promoting Putin's fantasies about his invasion and politicizing the national security challenges facing President Biden so ludicrous. They obviously have no trouble looking at the camera to peddle disinformation and pontificate about what should be done. Given the casualties in their own ranks, the risks reporters face daily in Ukraine, and Biden's success in leading the NATO response so far, the networks' bankable babblers also need to look in the mirror. The image is anything but a profile in courage.

Take prime time on Fox. Notwithstanding his past praise for Putin and dismissal of Russian aggression, an outraged Tucker Carlson, Fox's evening star, puffed up to call out his critics last week. A slanderous attack, as he put it, by Texas Republican Representative Mike McCaul reportedly labeled him an outlet for Putin's party line. And that's not all. Carlson averred McCaul's words are a political sin. The evidence: Biden says the same kind of thing. Russian Foreign Minister Sergey Lavrov noted Fox's helpfulness. He encouraged RT, Moscow's state-run news network, to give Fox's views more airtime. Picking up the hint, Russia's security service reportedly sent RT a 12-page memo on the subject, mentioning Carlson by name.

And then there's One America Network, even farther right than Fox, that has evangelized President Trump's stolen election lie 24/7. Dropped by DirectTV a few months ago and apparently teetering on the financial brink, OAN nevertheless is rolling the latest Russian disinformation into its schtick to continue the fight. On March 17, one of itsanchors accused President Biden of complicity in "the false flag operation" that bombed a Ukrainian maternity hospital. In a feat of journalistic legerdemain, the newsman somehow rolled video tape of the destruction while ignoring the Russian missile crater, ten feet deep in the hospital's front yard, and the fact Moscow officially said it launched the attack.

The same folks who can't quite figure out why their bloviating sounds like a rip-and-read script drafted by Russian TV, of course, are proclaiming their righteousness, blaming criticism on the cancel culture's lust to curb their freedom of speech. It's a shame Carlson and his colleagues who espy Big Brother's hand coming for them nightly don't peek out of their foxholes at Moscow where Putin's fingers already are wrapped around Russian journalists' necks.

The Fox and far right crowd might compare their imaginary perils to what's facing Marina Ovsyannikova. A former journalist at Moscow's Channel One, her bravery could well carry a far higher cost than all the derision currently coming Fox's way.

A producer at state television for 19 years, Ovsyannikova protested the invasion of Ukraine live during Channel One's prime time news program on March 14. Arrested and fined, she's waiting for more, telling the German magazine Der Spiegel that, fearful or not, she isn't leaving the country. "Anything could happen -- a car accident, anything they want. I'm aware of that," she said. Citing Putin's growing authoritarianism, roll back of democratic reforms, poisoning of opponents, and finally the invasion, she explained, "My dissatisfaction has been building up over all these years." Ovsyannikova says she isn't alone, noting, "The majority of smart and educated people oppose the war."

Among news and other on-air personalities at the state-run or controlled outlets, her assertion is bearing out. According to BBC, a Channel One colleague, Zhanna Agalakova,quit as Europe correspondent. Two long time journalists, news presenter Lilia Gildeyeva and Vadim Glusker, have left rival NTV. At RT, meanwhile, Maria Baronova, its former chief editor, has resigned. Add to that antiwar statements on social media by talk show hosts and celebrities who have taken leave from their programs and a prima ballerina, Olga Smirnova, who two weeks ago pirouetted from the Bolshoi to the Dutch National Ballet after denouncing the war.

So, consider the comparison. Carlson, with every right to voice his opinion, dismisses as slander a congressman's criticism of his views that even Russia's foreign minister reportedly suggests amount to carrying the Kremlin's water. Meanwhile, the Fox star pockets a reported annual $10 million check from the network for his nightly performance art. In Moscow, Russian journalists refuse to haul Putin's bucket, instead speaking out or resigning to protest Putin's aggression, and presumably foregoing their salaries, perhaps their freedom, or even personal safety. The profile in courage? You decide.

When it comes to the occupants of the management suites in the media giants that own the news and set its standards, the journalists who are putting themselves at risk to report from Ukraine as well as those standing up for the truth in Moscow deserve better.