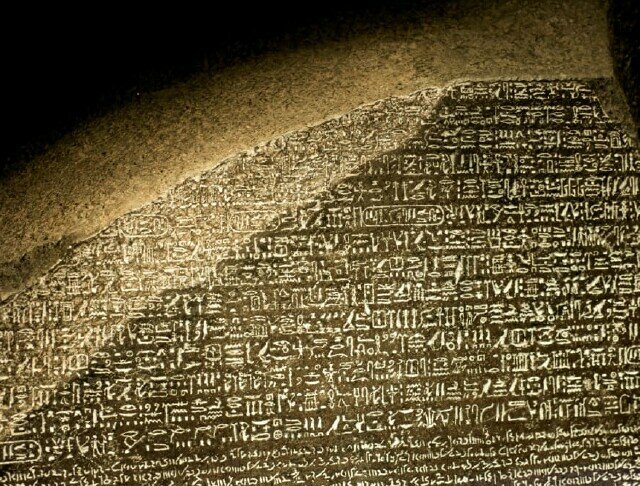 If "media" refers to a means of communicating information, then the Rosetta stone (pictured above) -- a slab more than 2,000 years old engraved with a decree about Pharaoh Ptolemy V, and the key artifact that allowed modern scholars to decipher Egyptian hieroglyphics -- is arguably the world's most important ancient media.

The stone was found 222 years ago this month, on July 15, 1799, by French army engineers who were part of Napoleon's Egyptian advance. The campaign was the emperor's effort to control the eastern Mediterranean region, and ultimately to confront the British in India. Working to build an addition to Fort Julien near the Nile Delta town of Rashid, also known as Rosetta, the engineers discovered the stone built into an old wall. It was the French officer in charge of the project, Pierre-François Bouchard, who recognized the significance of what they'd found.

Two years later, in 1801, when the British defeated the French and Napoleon's army was turned back, the Treaty of Alexandria transferred the stone to British control. In 1802, it was shipped back to England. It has lived ever since at the British Museum, except for a period during World War I, when it, along with other artifacts, was moved for safekeeping to a nearby Tube station to protect it from heavy German bombs. (It sits not far from the Elgin Marbles, taken from the Parthenon in Athens, and other spoils of colonialism.)

The content of the stone's inscription isn't really that interesting. A decree by council of Egyptian priests, it's an endorsement of the good deeds and religious devotion of the young pharaoh, commemorating his ascension to the throne. What makes it notable is that the same message is inscribed three times on the stone -- once in hieroglyphics (the priestly language, equivalent to a Latin inscription in today's Catholic Church), once in demotic script (the everyday language of ancient Egypt) and once more in ancient Greek (the language used by Egypt's rulers and administrators). That parallel text is what allowed scholars to crack the code.

Hieroglyphics had gone out of use around the start of the fourth century. By the modern age, no one knew how to read or translate them. But scholars did know how to read ancient Greek. When the French found the Rosetta stone being used as a building block, it was no longer fully intact. But it contained 14 lines of hieroglyphic script, and by comparing that script to the ancient Greek, it was possible to start to figure out translations.

The British physicist Thomas Young made the first big steps around 1814. He was able to determine that some glyphs known as cartouches -- ovals with other symbols inside -- were phonetic spellings of royal names, including Ptolemy's. In the 1820s, French linguist Jean-François Champollion expanded on that insight, realizing that hieroglyphics weren't simply pictographs, as had previously been assumed, but rather combined picture and phonetic writing. They revealed the actual sounds of ancient Egyptian language. By 1824, he was able to fully translate ancient hieroglyphics.

The writing on the Rosetta stone, which is a bit less than four feet tall and about two and a half feet wide, includes another interesting detail. According to the text, this wasn't the only version of the priests' decree praising Ptolemy. It says that identical copies were to be placed in every major temple across Egypt. And since the French discovery more than 200 years ago, other copies of the decree have been found. In other words, the Rosetta stone isn't merely world-changing ancient media; it's world-changing ancient mass media.