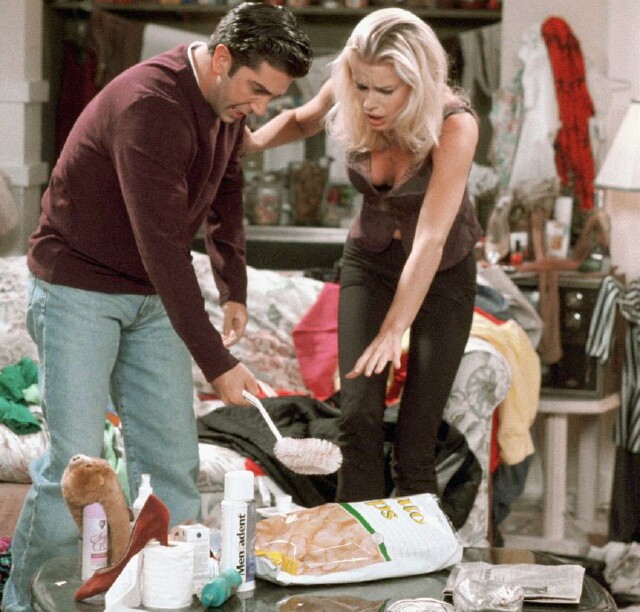 It's difficult to recall a time former model turned actor Rebecca Romijn wasn't a fixture on film or television screens.  However, as the old saying goes, “Everyone's gotta start somewhere.”  For Romijn, that somewhere was the hit TV series Friends, which in retrospect was a pretty good place to begin.

The year was 1997 and Friends  was ratings gold as part of NBC's legendary Must-See TV Thursday night line-up.  It was in the midst of the show’s fourth season that Romijn made her memorable appearance in The One with the Dirty Girl  as Cheryl, a doctoral paleontology candidate (specializing in the Cenozoic era) who briefly dates Ross Geller (played by David Schwimmer, pictured here with Romijn).  Dazzled by Cheryl's beauty, Ross can't believe his luck, until a visit to her apartment proves what she gained in the looks department clearly overcompensated for her lack of cleanliness.  Could it have been any messier? 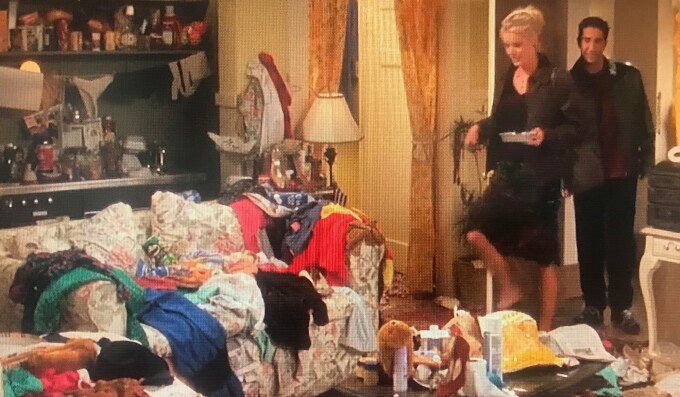 The role was brief, but one Romijn remembers fondly for helping put her on the map.  "It was my very first paid acting job," she recalled when MediaVillage spoke with her exclusively about the show.  "I was just modeling at the time I got that show.  [Being] my first professional acting job, I was scared shitless!  And it was amazing!

"I was so nervous as it was really at the height of the success of that show," she continued.  "I wasn't such a name at that point.  I guess I was working for Sports Illustrated and had been working with Victoria Secret, so I don't know that I wasn’t a name, but I hadn't acted.  Although, I did grow up in musical theater as a kid, so it wasn't like I'd never acted.  I had been since birth."

According to Romijn, as a first timer, walking onto the set of her favorite show was something else.  "I was a huge fan, so walking onto that set was intimidating, [especially] with it being my first gig!" she recalled.  "I remember we shot live in front of the audience on a Friday night.  We started at 8 p.m. and finished around one or two in the morning.  We also rehearsed during the week, and things that worked in rehearsals didn't always necessarily play for the audience.  So the writers would be frantically re-writing jokes and saying, 'Try this, or now try this!'  Whatever the audience responded to was what they ended up going with.

"My character was ridiculously messy, but the truth is I was so nervous I relied on the comedy of the material and the subject matter," she continued.  "I was like, 'If I am terrible, the jokes will write themselves.'  I knew the show would be funny whether or not I was good."

To this day, Romijn thanks her Friends scene partner David Schwimmer for his on-set generosity, and for helping her realize exactly what she wanted to with her career.  "The whole cast was great and David Schwimmer … just great!  He was hell-bent on making it fun.  It was a great experience and almost like working with live theater as you are relying on a live reaction, which is like an energy rush and scary.  I remember walking out of the soundstage at Warner Bros. that night going, "It's official.  This is exactly what I want to be doing."

Since then Romijn has done just that morphing her career from modeling to leading roles on TV shows like Pepper Dennis (2006), Ugly Betty (2007-08), The Librarians (2014-18) and most recently CBS All Access’ Star Trek Discovery, along with her memorable big screen role as Mystique in X-Men (2000) and a laundry list of hosting credits.  In February of 2018, Romijn, a long-time animal-rights activist, was also given the honor of being named Ambassador of Hallmark Channel's Adoption Ever After initiative.

Today, Romijn is not surprised by the endurance of Friends and its continued success globally in reruns and on streaming services like Netflix.  Nor is she surprised about still getting recognized for it.  "It's funny because it’s almost like that show has a new life and a new audience has discovered it -- a whole new generation," she mused.  "It's funny to get that kind of reaction from it, yet it doesn't surprise me as it was a great show.  I don't think I've seen [the episode] since it first aired, but I have a feeling my kids are going to a part of the 'next generation to discover it’ and will be all, ‘Mom!  You were on it?’  It's cool."

All which leaves us pondering the big question -- whatever became of Cheryl?  "She'd probably be on Hoarders," Romijn laughed.  "She wouldn't be clean [now] as she's a mess!  So most definitely on Hoarders, hopefully without a bunch of dead cats, hamsters or other deceased rodents under all her garbage."