Friends of "Friends" Returns as the Countdown to #Friends25 Begins 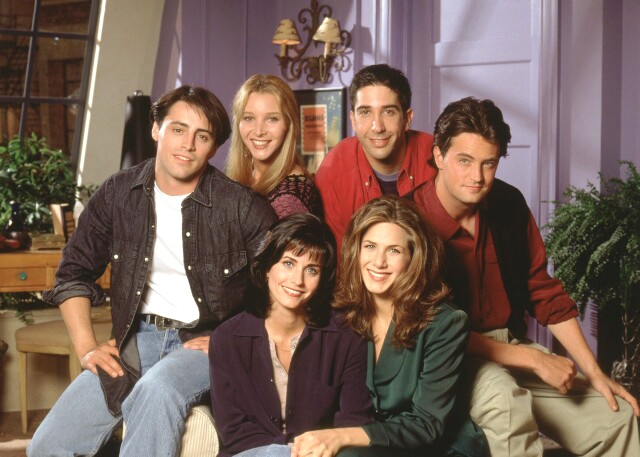 The beloved and perpetually popular sitcom Friends celebrates the 25th anniversary of its debut on September 22, and if that doesn’t make you feel old, nothing will.  Hard to believe we now refer to it as a “classic,” ain't it?  Yes, 25 years have passed since the fresh-faced Monica (Courteney Cox), Ross (David Schwimmer), Joey (Matt LeBlanc), Chandler (Matthew Perry), Phoebe (Lisa Kudrow) and Rachel (Jennifer Aniston) promised “They’d be there for us,” so to speak, and by golly they have been.  While no new installments of Friends have graced our screens since May 6, 2004 (when it ended its 10-year run) the Warner Bros.-produced series moved into syndication and, with the addition of streaming services like Netflix as another way to watch, has gone on to become one of the most-watched sitcoms on television worldwide.  In fact, when news broke last December that the show would be leaving Netflix, the response was a collective, “Nooooo!”  Social media platforms like Facebook and Twitter were overloaded by devotees threatening to immediately cancel their Netflix subscriptions at the time of its departure.  It worked for a while, but with the recent announcement of Warner Bros.’ exclusive deal with upcoming streaming service HBO Max (launching in the spring of 2020), and reportedly paying $425 million for the rights ($85 million a year for five years), our Friends will be on the move.  (Side note:  September 22, the date of the show's official 25th anniversary, is also Emmy night.  We can only wonder how the Academy of Television Arts and Sciences will mark the occasion.)

Friends was doing just fine in syndication, but when it made the move to Netflix a phenomenon was born anew, as Millennials and Gen Zers accustomed to binge-watching shows found it and made it their own.  In July 2018 Kevin Bright, one of its executive producers, thanked Netflix in a joint speech with series co-creators Marta Kauffman and David Crane when the trio accepted the Television Critics Association Heritage Award for Friends, placing it alongside The Mary Tyler Moore Show, The West Wing, M*A*S*H* and others top-tier series for its contribution to popular culture.  “God bless Netflix,” Bright said.  “We thank you for introducing 12-year-olds to our show and getting them to love it.”

“Which is pretty amazing considering the portable phones are enormous,” added Crane.  “And there are jokes about Hootie and the Blowfish!”

Kauffman hit the nail on the head as to why the show appeals to today’s college-aged students, too young to have watched during its first run.  “True story,” she began.  “My teenage daughter has friends who thought it was a new show, a period piece.”

Yes, I was obsessed with the show in its initial run, and that obsession continues to this day.  At one point during a prolonged blur of Nick at Nite viewing my fixation shifted from the six leads to the stellar array of guest stars who graced Stage 25 on the Warner Bros. lot.  During its first run it was always a huge deal when a fresh superstar appeared on the show.  But the truth is a lot of today’s big stars got their starts on the series, making “Spot the Newbie” another way to enjoy the series.  Over 130 guest-players of note appeared in memorable storylines on the series, so 15 years ago, whenever I encountered one of them, I started asking about their experience on the show, giving birth to the concept of Friends of Friends, a recurring feature here on MediaVillage since 2016.

Without exception, for the guest stars I’ve talked to Friends was a delightful experience and one they’re proud to have listed on their IMBD page.  Some were already huge fans, like Christine Moore (True Blood, Jesse, Claws), who appeared as Marjorie in 1998’s The One with All the Wedding Dresses and credits the series for giving her “One of my first jobs.”

Criminal Minds alum Paget Brewster still credits Matthew Perry for her career, having told me that he went to bat for the acting newbie to play Kathy in a six-episode arc that began in 1997 during season four.

Oscar-Nominated series regular Elliott Gould, who for the run of the series appeared as Jack Gellar (Ross and Monica’s father), credits the show for giving him the chance to work with one of Hollywood’s most prominent directors.  “I appreciate [Friends] and the reason I did it and committed to it at the time, was I discovered that Jim Burrows was the director,” he told me.  “I really wanted to work with him as I had worked with his father Abe.”

As the ultimate “Friends” frenzy fast approaches in September, Warner Bros. has planned a series of celebratory events that include a Central Perk pop-up coffee shop in New York, and in conjunction with Fathom Events the big-screen celebration Friends 25th: The One With the Anniversary, to screen on 1,000 movie screens across the country. MediaVillage will also be celebrating as I dig into my archives and prepare more of my never-before-published Friends ofFriends interviews.

I will never get the chance to fulfill my goal of chatting to every single big-name guest who was on the show.  That’s due in part to the fact that two of the biggest -- Charlton Heston and Robin Williams – are no longer with us.  But let it be known, Brad Pitt, Reese Witherspoon, George Clooney and Julia Roberts -- and especially you, Tom Selleck -- that for as long as you are with us, I’ll be there for you, hoping to collect even more memories.