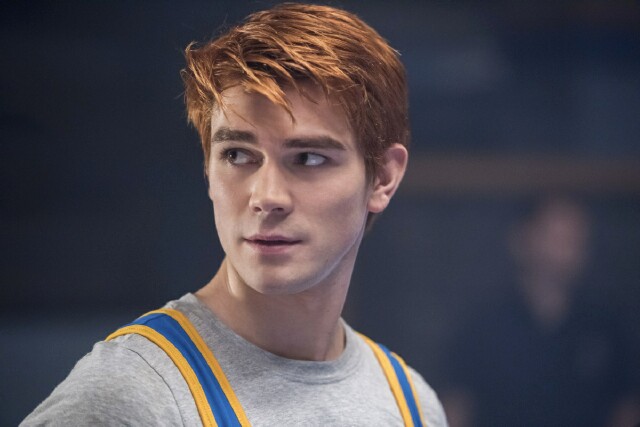 Julie Plec, the executive producer and showrunner of The CW’s The Vampire Diaries and The Originals is making her mark on the network’s Riverdale, as well.  The episode telecast tonight, titled “Tell-Tale Heart,” is the first she has directed for the Archie comics-inspired series.  But she is no stranger to being behind the camera, having directed episodes of The Vampire Diaries during its run.  "It was awesome directing Riverdale," she told MediaVillage at a special screening of the episode held in Los Angles, which was also attended by series creator and executive producer Roberto Aguirre-Sacasa.  "It was a very energizing and collaborative experience, which isn't always the case.

"What was thrilling about it was I binged-watched every episode to catch-up and was so blown away by the look of the show because it's so specific and stylized and that's hard to do on a TV schedule," she continued.  "When you get there and see the amount of deep artistic talent [in production], and their attention to detail -- it's phenomenal."

One of the thrills of working on Riverdale came as a surprise to Plec when she revisited a familiar Vancouver location for the shoot.  "I'd seen Thistlehouse on camera," she explained.  "But when we pulled up the driveway, it looked so familiar and I had the feeling of being there before.  When I took a good look at the house [I realized] it was the Salvatore house from the Vampire Diaries pilot and the backyard of it was where we built our cemetery.  It was a nice flashback."

No spoilers, but we can reveal things do take a major turn storyline wise in tonight’s episode for both Archie (K.J. Apa, pictured at top and interviewed here) and Betty (Lili Reinhart), whose dark path continues to spiral.  Likewise for Jughead (Cole Sprouse) and his father FP Jones (Skeet Ulrich, pictured below right with Sprouse) -- let's just say some holes are deeply dug (wink, wink).  The plot also thickens for the entire Lodge family as one family member makes a bold move. 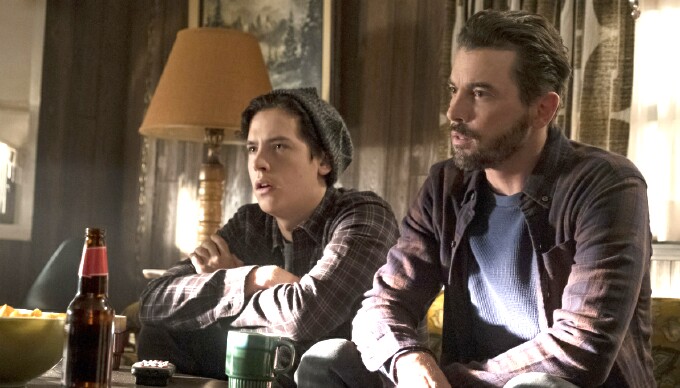 According to Plec, directing a show with such a distinctive pallet -- one she knew she would have to emulate -- came easy.  “All I had to do was my homework and pay attention,” she said.  “It kind of took care of itself.  The best thing you can do going into someone else’s show is to learn it as intimately as you can.  I did a beautiful crash course.”

Aguirre-Sacasa also had big news regarding the upcoming, much-anticipated, musical episode of Riverdale.  "While Riverdale is a pulp show there is an element of coming of age and high school,” he explained.  “Doing the school musical is such a rite of passage that we wanted to do it.  But it still had to be a Riverdale."

For musical inspiration, Aguirre-Sacasa turned to one of his favorite movies and a surprising piece of source material.  "I'm a huge fan of the movie Carrie and was obsessed with the Broadway flop, Carrie: The Musical," he said.  "A few years ago a friend revived it Off-Broadway and revealed the gem we always knew it was.  [I realized] it would be a great musical for Riverdale to do.  Madelaine Petsch (Cheryl Blossom, pictured below) was overjoyed when she heard she was playing Carrie." 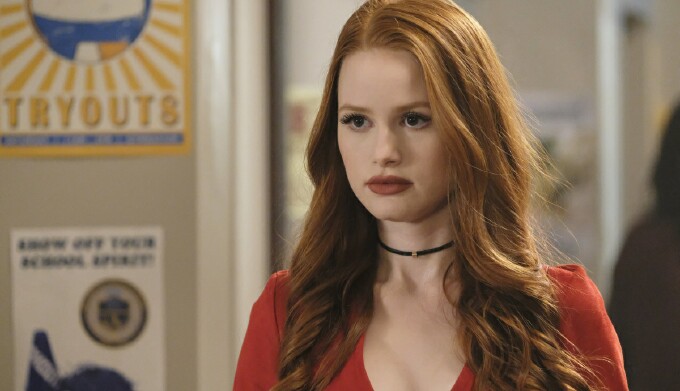 Aguirre-Sacasa also admitted that while the Archie character will be in the musical, it isn’t the episode in which he finally gets the gang’s legendary band together.  "The Archies as they appeared in the comic book has not yet happened,” he laughed. “But it will happen.  I am determined to make it happen somehow!"

Whether or not Jughead (Cole Sprouse) will form a part of that future band remains to be seen.  Sprouse has very publicly expressed his disdain for anything musical, yet we were assured he will be in that episode.  "Cole did express that he never sang for Disney; that it would take a lot,” Aguirre-Sacasa noted.  “He felt the character of Jughead probably wouldn't be in the school musical.  However, he's an integral part of it and doing something quintessentially Jughead.  He just doesn't sing!

"We had a wrap party for season one that was essentially a variety show and every kid, every parent sang, every crew member sang, except Cole,” he added. “We didn't audition anyone except the character of Josie for musical ability, but K.J. is a fantastic guitar player and [the fact they all are musical] is a happy accident."

Riverdaleis telecast Wednesday at 8 p.m. on The CW.