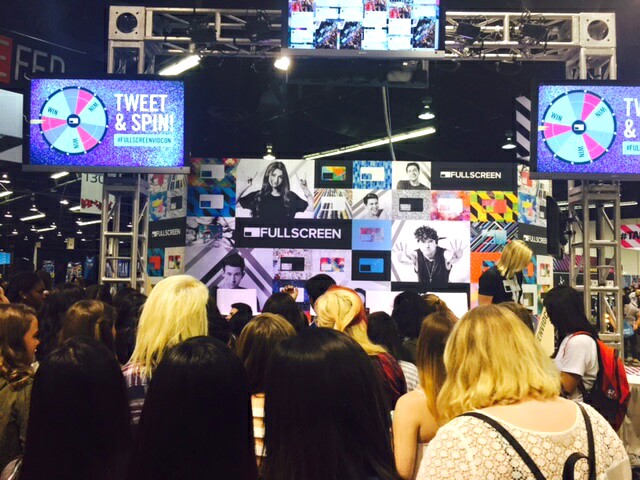 VidCon is no longer cool. I know this because I was there and history tells me that the moment I show up, that's it for the whole “cool” thing.

The two things that strike you at VidCon are the hordes of wide-eyed teens who are either hopeful YouTubers or fans in search of selfie opportunities with major YouTube celebrities. The second is the increasing population of extraordinarily polished professional (multi) channel owners from Full Screen and Maker to NBC and Nickelodeon.

In this juxtaposition may be the past, present and future of YouTube and, for that matter online video in general.

YouTube's past IS a selfie. YouTubers create content for themselves. I point a camera at ME and because MY obsessions are YOUR obsessions and my issues are your issues, you relate, you watch, you share. If enough of you do, we have a mob scene and more or less ephemeral celebrity and the influence that comes from relatable and authentic voices.

YouTube's present is the organization and codification of YouTube's past, driven by the multi-channel networks, cross promotion of creators and the application of corporate muscle from Disney (Maker), Otter (Full Screen) and others including, of course, Google.

The MCN's and others are about more than selfie content. In many cases they are the new TV, breaking down barriers to entry, challenging the creative judgement of my generation and just maybe creating a content class that will combine reach, relevance, and relatable authenticity at scale.

If that happens, the great tipping point in the distribution of advertising dollars may be nearer than many think. The challenge for many advertisers is how to pull off the magic trick of simultaneously ceding creative control AND maintaining the purpose and effectiveness of messaging. There's a new contract between consumers and brands -- the details of which have yet to be written, but the creators, at least, will tell you, that brand messaging expressed in the authentic voice of the creator that the fan chooses to follow, is NOT automatically rejected. The implication is that there is a home for advertisers n=but not necessarily for advertising..

In terms of the under- 30 video audience, there's a possibility that the race has already been won but the prize has yet to be awarded. The wider question is what happens next? As the YouTube generation ages, will they migrate to long form and 'corporately' created content and the traditional view of celebrity? Maybe they will.  But if they don't, an age that started with the studio system almost a century ago may finally be over.