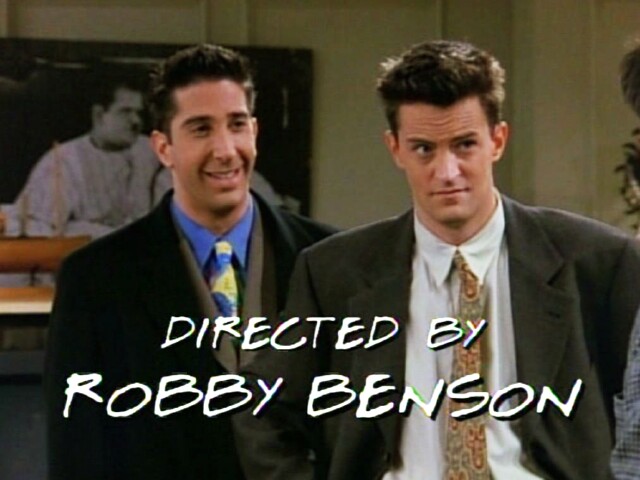 As an actor, Robby Benson endeared himself to a generation in the 1970s through feature films like Jeremy, Ode to Billy Joe and the classic Ice Castles, along with a host of television films.  It’s a trend that Benson, also an accomplished musician, continued well into the ‘80s and ‘90s before turning his talent to voice-over work, most notably in 1991as the voice of the Beast in the Walt Disney classic Beauty and the Beast, for which he received a Grammy Award nomination for Album of the Year.  In addition to his onscreen work, Benson’s name is a fixture in the credits of television shows like Evening Shade, Ellen, Sabrina the Teenage Witch, The Naked Truth, Jesse and of course Friends, as a successful multi-camera director.  And while he never appeared on-screen in a Friends episode, the six episodes he directed between 1995 and 1997 forever make him a friend of Friends.

“Friends was a wonderful experience,” Benson recalled in an exclusive interview with MediaVillage.  “First, because of Marta Kauffman and David Crane, who are exceptional writers.  That entire writer's room understood what each of the characters’ strengths were comedically, and it was one of the very few sitcoms where if a joke didn't work, and the writer felt it was a good joke, it may go to another character.  When you think about that, you can see where a lot of shows go wrong.

“[Another] character often wouldn't say that line,” he continued.  “Yet on Friends, they knew exactly the world each character lived in.  That's why the vision was so consistent.   The actors were so brilliant, doing what they did best, and the writers would write for what they did best.  Watching Friends is almost like watching ‘a perfect show’ because it's comfort food, and at any time, in any generation, it's about people.  Marta and David knew how to make it.”

For Benson, stepping behind the camera for the first time on Stage 25 at Warner Bros. to direct Friends felt very familiar.  “I had already directed David Schwimmer (pictured at top left with Matthew Perry) in a show called Monty,” he shared.  “I'd directed Jennifer Aniston in something called Muddling Through, where she played the unattractive sister -- if you can imagine that!  And I knew Lisa Kudrow because her [physician] father helped me with migraines.  One day when I went there, Lisa was working for her dad as the receptionist.  We also knew Lisa's sister because our kids went to the same school.  It's just a small world!”

It was through the Kauffman/Crane connection, after directing an episode of their 1995 series Dream On, that Benson’s directing career flourished.  “I actually received a Cable ACE Award nomination for that show,” he recalled.  “We then worked together on Family Album, and after that I worked with them on Jesse with Christina Applegate (Rachel’s sister Amy on Friends), who is one of the most professional and talented people you could ever meet.”

According to Benson, after working in the medium for so long he doesn’t understand why the word “sitcom” often gets a bad rap.  “The real words, ‘situational comedy,’ are what make us want to watch a show,” he said.  “Your characters will get into a situation and because of these characters being in the situation is so odd, you want to sit back and watch them try to finesse the journey they’re suddenly thrust into.

“That makes us laugh, he added.”  “So, the combination of Kauffman/Crane, along with those actors, who all understood that so well, was a blessing.  It allowed us to make things funnier if it was possible.  If not, just what was on the page and what the actors were doing, if you knew where to put the camera and what lenses to use, you could enhance the comedy.  That's what I loved about shooting [Friends].”

Benson attributes much of the Friends “magic” to that perfect combination of writing and acting by the show’s six leads, all authentic to the comedy they were portraying.  “It's something that can live in almost any atmosphere because you're drawn into their lives and there are no shortcuts,” he explained.  “We knew how these people would behave in a certain situation and we couldn’t wait to see how it worked out.  I think that's truly the magic of what Marta and David came up with, and the actors took it one step further.

“With Friends, all the credit should go to Marta and David, along with the actors,” he offered in closing.  “Every director who walked on that set immediately understood it wasn't about them.  It was about the project.  It was a very unselfish atmosphere and if you really want to know the truth, that is the key to the most successful projects.  Be it film, one-hour drama or half-hour comedy, or Broadway, if it's authentic to itself the odds are you can pull people in and you might create magic.  Or make new magic, which is what I tried doing on Friends.”