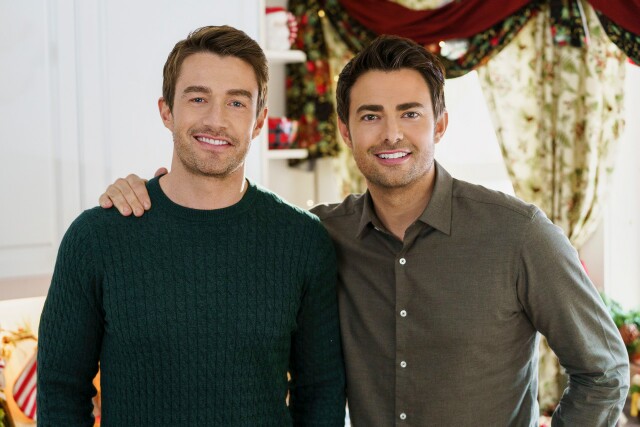 Earlier this year, MediaVillage welcomed dashing actor Robert Buckley to the Hallmark Channel family, dubbing him the Paul Newman of the network and a welcome addition to its roster of talent. At the time Buckley mused that his Hallmark debut was a long time coming, but as he then put it, “Better late than never.” Fast forward seven months, and Buckley has turned into the Darryl F. Zanuck of the network, writing, pitching, executive producing and starring in one of its most significant projects to date, The Christmas House. “It's definitely surreal,” he admitted when MediaVillage recently spoke to him. “If you’d asked me [then] could you see yourself doing all those things, I wouldn’t have thought it was very likely, and not on the radar at all. But everything kind of lined up, there was a cool story that sort of fit with the stories Hallmark tell, and a lot of things came together in the right way. I actually pitched The Christmas House last August and found out the first week of January that it had been greenlit to go into development. I couldn’t talk about it then on the off chance it didn't happen.”

What makes The Christmas House such an important piece is that it’s the first movie Hallmark has produced to feature a married gay couple at the center of a story (which is also about other relationships within a loving family). That was something Buckley (pictured at top, left) wanted to bring to the screen. “This feels like something that should have happened 20 years ago,” he said. “I'm glad it's finally happening. When I pitched the movie, I think it was the second thing I said because I wanted to be very upfront about it. It was really important to me that we show a gay couple in the exact same way we’d portray a straight couple. To me it was overdue.

“Pitching it, I pretty much led with that,” he continued. “I was thinking if they're not on board, it's cool, we’ll know right away, and also what a great reason to get shot down. But the opposite happened. Kate Redinger, an executive on Love in Store, had heard about this family tradition I had (of completely transforming our house for Christmas) and reached out to ask if I’d be interested in going to lunch and talking about it. I did, and she saw a movie there. So, a big tip of the hat to Kate as she was instrumental in this thing getting off the ground.” 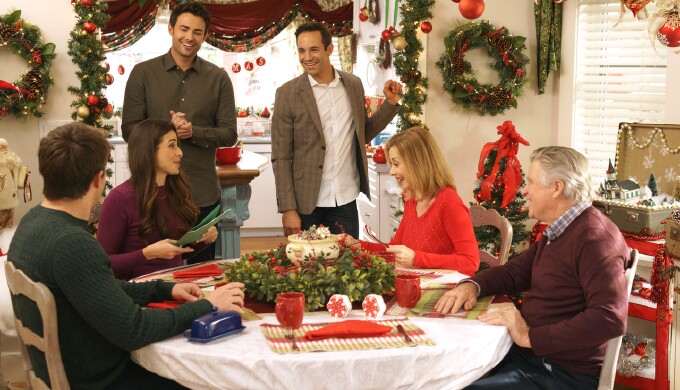 While Buckley already had an idea of his diverse array of characters (that also includes a Latino family), it was Hallmark that was ready to further flesh them out. “I said, ‘I want my brother to be gay, married, and to show him and his husband doing all the things we’d show straight couples doing,'" he recalled. “They were like, ‘Great, let's go further with that!’ I said, ‘How about they be in the process of adopting a baby?" They replied, ‘Great!’ Throughout the development process, it was, ‘Give us more’. So, it was perfect timing. Hallmark was ready to change it up, and I was happy to get the opportunity to be the one to do it.

“It’s not by accident that the gay couple has all their ducks in a row,” he added. “We didn’t want to shine a spotlight on them and make it be like a big thing. Just show them as a couple. It’s interesting as my character Mike is coming apart at the seams and his parents are having troubles, while his brother has it together.

"As an actor, I'm a part of a lot of stories, not usually my own. In this situation I felt like, well, I'm getting the opportunity to tell a story. Sure, I want it to be fun and entertaining, but I would like it to have some significance and value outside of just that.”

One person who appreciated the film's significance from the onset was Buckley’s co-star and on-screen brother, Jonathan Bennett (Brandon), with whom he became fast friends. “I met Jonathan at 5 a.m. at LAX heading to the set,” Buckley recalled. “He was just so grateful and so happy. That really caught me off guard and I almost felt uncomfortable. I told him, ‘This is just a thing that should have happened, and I'm just the guy doing it.’ He said, ‘No, no, no! You don't get it. This is big for us!’

"What I didn't realize is that as a straight guy, I see two of me in every single thing I watch. I don't have to struggle to find myself in a movie or a TV show. It's only recently I realized that is such a luxury. That's a privilege. It’s not the case for a lot of people, and everyone should have the opportunity to watch themselves and see themselves [represented] in stories.”

That's a sentiment Bennett is happy to echo. (He is pictured at top with Buckley and below with co-star Brad Harder, who plays Brandon's husband Jake). “It feels like I’m a part of progress and it feels good,” he told MediaVillage of his part in Hallmark Channel history. “I can just imagine what it would have been like for a younger me to see a storyline like this in a Christmas movie growing up. I think representation is important, and for me to get to represent this storyline and make history on Hallmark Channel is an honor.” 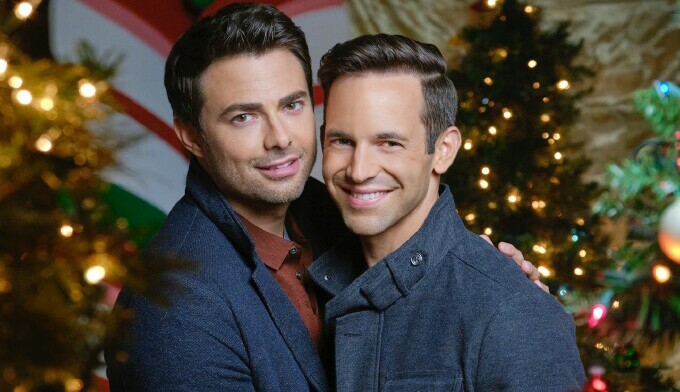 Buckley admitted that while his own family lurked in the back of his mind writing the film, the entire cast, which also includes Sharon Lawrence (as mom Phyllis), Treat Williams (as dad Bill) and Ana Ayora (as Mike's love interest, Andi) exceeded all his expectations. (Buckley and Ayora are pictured below.) “This cast is fantastic,” he exclaimed. “We bonded over texts while in quarantine, so by the time we got to set we already were comfortable, making fun of each other, and riffing like a family. Oh, and Ana, who is also new to the Hallmark family, is not only a fun, lovely person, but super sweet, so talented, and such a great scene partner and love interest.” 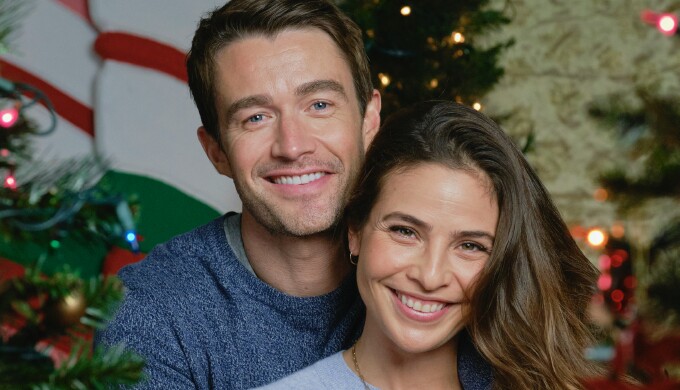 Buckley felt right at home throughout the production, largely because many sets were replicas of rooms in the actual Buckley Christmas house. “I supplied a lot of childhood photos,” he laughed. “There'd be moments we were sitting at the kitchen table and I’d look down at my plate and realize, ‘Oh my God we had this exact China!' Every day we would show up and there was a little bit more done. Even a life size replica of the English phone booth that my family had in the living room! They just did an amazing job.”

To say Buckley is beyond proud of this project is an understatement. He’s also proud of Hallmark and their positive and inclusive programming direction, but like anything new, he realizes there will be people with an opposite opinion. “I've experienced some push back online,” he admitted. “To be honest, all it’s really done is show me how important making a movie like this. It’s easy, again, being a straight person, to not realize just how prevalent that sort of ignorance and hatred is.

“It’s really made me realize that this is something gay people have to deal with every day,” he continued. “If anything, it’s made me go, ‘Man, I'm really glad we're making this movie because the fact is it should be normal. It should be out there, and there's no reason for it not to be."

What's his message to those who might object to this movie? "Listen, you have the right to watch anything you want," he said. "But I will say if you watch this, I don’t think you’ll be as upset about it as you think you might be.”

The Christmas Housewill premiere Sunday, November 22 at 8 p.m. on Hallmark Channel as a part of its Countdown to Christmas programming event.