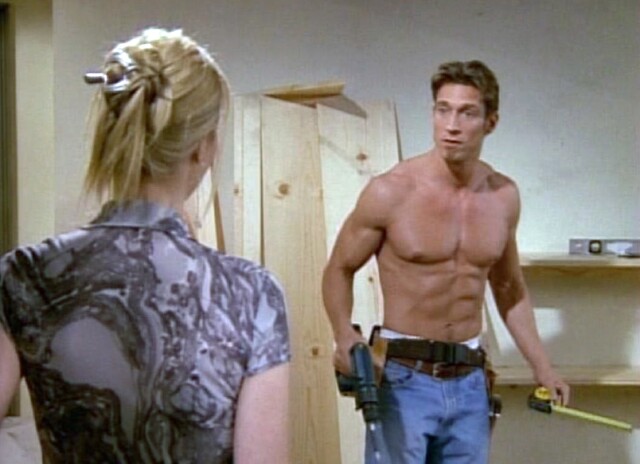 When it comes to his experience becoming a Friend of Friends, actor Robert Gant has nothing but fond memories.  Best known for his work with Hallmark Channel, and a stint on the Showtime series Queer as Folk, Gant had only a smattering of film and television guest credits to his name when in 1997 he landed the role of sensitive kindergarten teacher Jason in The One with Ross’ Thing (Season 3, Episode 23), whom Phoebe two-times when she’s unable to decide between dating him or hunky fireman Vince (Matt Battaglia).  “My agent called and said, ‘Do you have any interest on being on a show called Friends?” Gant recalled when asked about the role.  “First of all, I do remember reading for the [Friends] casting director for the first time.  I was really working out in those days, and I still do, but I was in crazy good shape -- those abs were absurd.  The character had a physical bit, so I remember lifting my shirt in the audition and wiping my brow.

“The casting director brought me back to the producers and asked if I could do that bit with my shirt again, but to ‘not be inappropriate,’” he continued.  “So, I did it.  Careers kind of have their ‘moments’ and that was one of those turning moments [for mine].  I'd done mostly multi-cam stuff at that point, but the energy of the crowd at Friends, and the stakes of doing it … You could feel every [moment] was very precious.” 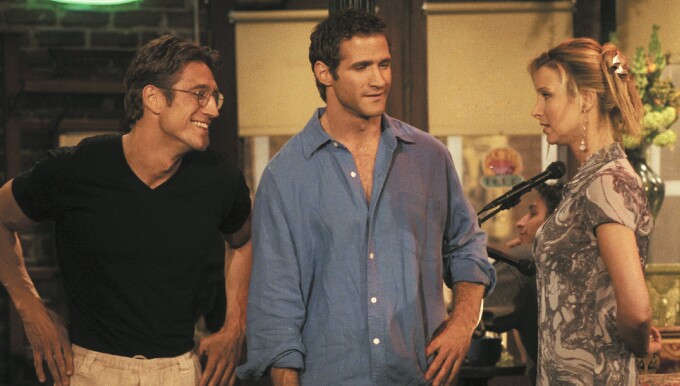 As one of Phoebe’s suitors, Gant (above left) shared most of his scenes with Lisa Kudrow (right), whom he calls, “A sweetheart to work with and just a doll.”  (Battaglia is pictured between them.)  He also has fond memories of the rest of the Friends ensemble cast.  “I remember being in the dressing rooms,” he recollected. “Jennifer (Aniston) was also a sweetheart.  I'd been working on [Disney’s] Hercules for a year, and Tate Donovan was his voice.  Those two were dating at the time, so we had this whole chat.  She said Tate ‘was always talking about the guy who was on the show,’ so we had this fun thing.

“Walking by all of their dressing rooms was fascinating,” he added.  “Each of those guys was such a reflection [of their characters].  One of the guys had a pinball table in his dressing room and it was a mess.  Jennifer's was beautifully done with flowers in the center.  Courteney’s was very casual.  I went by Lisa's dressing room; it had shopping bags everywhere, except for the table that was perfectly clear in the middle with a little candle right in the center.  I thought it was such a fascinating expression of personalities.”

For Gant, beyond the never-ending re-runs of his episode, the role was one that would keep popping up in his personal life.  “I recently ran into Marta Kauffman and she was very cool,” he smiled.  “I said, ‘I'm not sure if you remember me,’ and she replied, ‘Of course I remember you!’  We chatted for a while.  I also ran into Lisa at a hardware store a few years back with her son.  We were chatting and she asked him if he remembered me, as I guess he'd watched all the episodes, and that was really sweet.

“I also ran into Greg Neyland, one of the producers at the time,” he continued.  “He said, ‘I just want to tell you, and this was towards the end of their run, we always referenced that episode and you guys as one of their best male castings.’  I thought that was a neat thing for him to mention.

“I respectfully say this, but it was an interesting time because one of the cast members was going through a difficult period, and there was a very ‘caretaking energy’ about the set,” Gant continued.  “It was a moment where you could tell there was concern and it felt very present and it really gave you a sense that they were family.  All these little things are just part of the life journey, but that was a very special night for me.”

Some 22 years later, Gant is surprised to still be getting residual checks for the part, and he’s fine with how people remember his episode.  “If I'm forever the guy with the abs, that's something I'm happy to be,” he said with a laugh.  “Jason the Kindergarten teacher who was in really good shape!  If I get sent a screenshot, it's always, ‘Thanks for the reminder to go to the gym.’  But it really is nice to be remembered for my abs, because back then I put so much time and energy into fitness.  That legacy is nice.”

Oddly, Vince the fireman -- Jason’s competition for Phoebe’s affections -- is someone Gant would encounter later in his career, too.  “Matt Battaglia and I ended up working together on Queer as Folk,” he smiled.  “We’ve laughed about it over the years.  Fans are always making references to the kindergarten teacher and the fireman.  I will forever be grateful to be a part of Friends.”