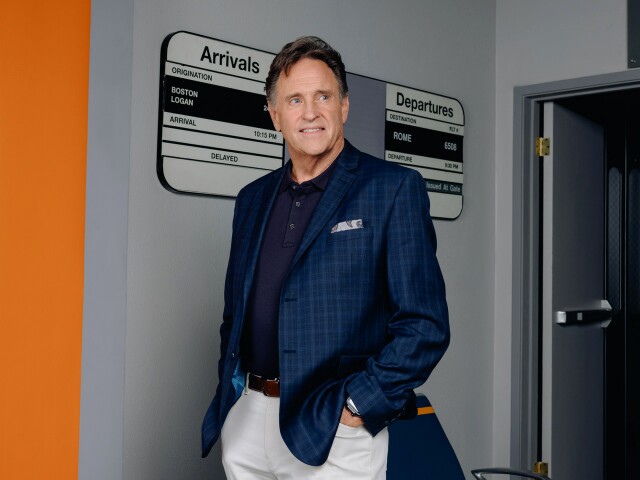 Thanks to his role as Ted Striker in the classic 1980 comedy Airplane! actor/producer/director Robert Hays has been synonymous with air travel for the past 41 years. The last time this real-life pilot sat in a pilot's seat on screen was for Sharknado 2: The Second One (2014) when he made a memorable cameo in the hit Syfy franchise. Now the popular actor is back, helming the controls of A&E's Fasten Your Seatbelt, a caught-on-camera exposé of the good, the bad and the sometimes-ugly side of all things airplane. "This whole thing has been so much fun," Hays said during an exclusive interview with MediaVillage. "Everyone here that put this together has been absolutely wonderful, and a pleasure to work with. I always like [things] to have a really great feeling, as it makes you want to go to work every day -- which is better than asking yourself, 'What am I doing here?' and developing an ulcer.

"I love airplanes and flying and have had my pilot's license for over 40 years," he continued. "Although, I haven't been flying that much lately. I know what can happen at airlines, on airplanes, and at airports, and now everyone has a camera and the fact everything can be captured makes it so interesting."

For Hays, one of the most interesting elements of doing the series was the character study of human behavior it presented. For many travelers, flying is an unnatural experience, and taking anything out of its natural environment can have varied effects. "Flying is a weird thing for a lot of people," he shared. "You do see a lot of nervous people on planes, and I've sat next to them. I don't think I've ever been nervous on a plane, and when we hit rough weather that has always been more fun and more exciting to me. Take-offs and landings are the two most enjoyable, fun, and exciting parts of flying for me as a pilot. Hitting turbulence is fun for me, too, but of course you don't want the wings falling off."

As a frequent flyer, Hays has experienced his fair share of crazy flight experiences, and one in particular had the passengers thinking they were on Candid Camera. "I was on a flight once and a flight attendant asked if I'd like to visit the cockpit," he recalled. "This was while we were still in the dock and a couple years after Airplane was released, so I was like, 'okay!' The pilot asked If I'd like to sit in the jump seat and if I wanted a beer. But now the cockpit door wouldn't close, and all the passengers were looking at me, just like a scene from the movie. I just lifted my beer, said, 'Cheers!' and toasted them. I did get to stay there through taxi and take-off though. It was crazy."

The eight-part series highlights the questionable behavior of some travelers, but on the flip side there are some heartwarming moments. "We have funny ones, and it's not all intoxicated people behaving badly," explained Hays. "There's a couple on their way to Vegas to get married and the crew gives them a spontaneous surprise, which was really cute. We have a little girl with a heavy backpack and as she tried to take it off, she falls over backward like a turtle. Instead of helping her, her mother starts filming her. Doing Airplane!, the (David and Jerry) Zucker and Jim Abrahams rule of comedy was pain is funny, and if that's the case I've done things that should be hilarious as they have beaten the crap out of me. It's just a terrible thing inside of us as human beings. If we see somebody fall, we laugh."

With Airplane celebrating its 41st anniversary this year, Hays is delighted to have been a part of something that has brought joy to so many. "[That] movie was like winning the lottery," he beamed. "I never get tired of people asking about it. People often say, 'You must be tired of hearing this, but I loved you in Airplane!' How could I ever be tired of or angry about someone telling me they liked something I did? I appreciate it and have had the most wonderful time because of what that movie did for me.

"People always try to deliver the line 'Surely you can't be serious -- and don't call me Shirley,'" he added laughing. "But I often get 'Obviously, you're not serious," which is close. I usually reply, 'Yes I am, and don't call me Obviously.' It's amazing how many variations people come up with that don't work."

Airplane! did spawn a sequel (Airplane II: The Sequel) in 1982, and according to Hays, there was a third in works. "We had a script," he said in closing. "At the time I'd get asked a lot if I was just going to do Airplane! for the rest of my life and when I'd be a real actor? I fell for it and turned it down, along with a huge salary. I kick myself now as today [that's] considered a franchise. You live and learn."

Fasten Your Seatbelt is telecast Wednesdays at 10 p.m. on A&E.