Roku and Tumblr: Taking Over the TV Viewing Experience? 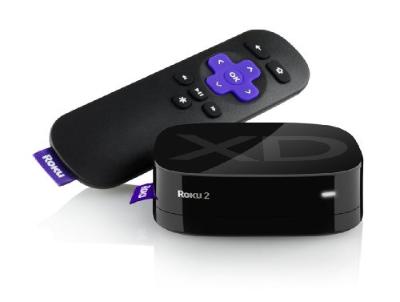 (Beginning in next week's Member's Only Report: Exclusive results from the annual Myers Survey of Advertising Executives on Digital Media Value and Sales Organization Performance)

Two senior industry leaders who have steadfast observations on the future of television are RBC Capital Markets managing director William Drewry and David Hayes, leader of Canvas, the think tank unit of Yahoo's microblogging platform Tumblr. Drewry is clear about how TV will be delivered to people and Hayes is confident about the TV set's capacity and capabilities. Hayes first explored set options as vice president of Lionsgate's digital marketing operation.

Both execs used last Thursday's Media Outlook 2014 event at the Hearst Tower in New York to showcase their respective positions. The crowd they spoke before--about 30 assembled by the Media Financial Management Association--was small in numbers. However, expect Drewry and Hayes to both be in great demand, and to reach larger crowds, if their outlooks pan out.

"I can see a day when all TV is over-the-top," Drewry declared. That's all TV networks, services and applications delivered independently of broadcast, cable or satellite. Roku, the digital media plug-in player for TV sets that RBC has invested in, has "opened people's eyes to what over-the-top can be." More than five million people have a Roku device attached to their sets in some way, able to watch more than 1,000 channels of video, audio and casual games. "They want to be the operating system of the TV set. People are already amazed at the depth of content available there."

His outlook came with some advice for the majority of Outlook attendees involved with local broadcast station groups. "Find your way to this platform," Drewry said.

With equally passionate fashion, Hayes concluded that smart TV sets and what they're doing now or will do soon are "going to be highly transformational." The transformation will not be long in coming where the public is concerned. "There's huge potential in storytelling and commerce. It's my one-year, around-the-corner thing of change," Hayes commented. "It's cool to think that in a year from now, smart TV will be so many different things. I see a future of app stores on all screens. Crowd-sourcing material could be important to this. Or user-generated content."

Tumblr allows people to insert multimedia and social media feedback into blogs. Canvas, Hayes' unit, is exploring smart TV possibilities, the exact nature of which he's not able to share in public now. He wishes otherwise, because Tumblr's ambition embraces being on every media platform.

Hayes and Drewry, along with the rest of us, may get further clarity on how soon their beliefs will shape the masses Wednesday during the annual Future of Television Forum, happening at the NY-based Museum of Jewish Heritage near Battery Park. Roku chief executive Anthony Wood will speak on the opening roundtable, and for the first time, a set of panels will focus on smart TV developments. Another first-time attraction, a half-day entrepreneur pitch session before venture capitalists, could turn up prospective smart TV service or tech players. Paraphrasing the popular 1980s Rick Ashley song/video and a bit of Robert Ripley, this kind of together may end up TV's forever...or not.