Ryan Murphy and Billy Porter on the Power of "Pose" 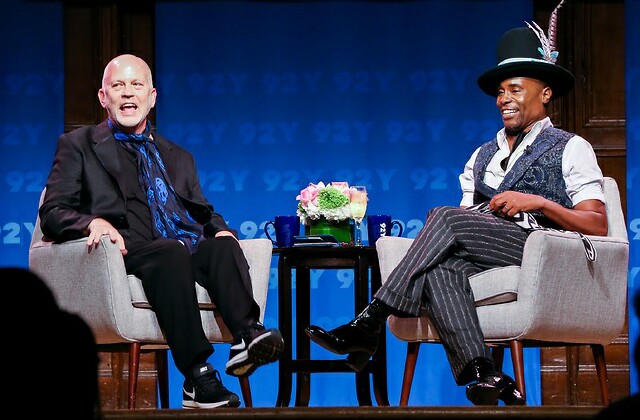 Billy Porter recently made history when he became the first openly gay black man to receive an Emmy nomination for Outstanding Lead Actor in a Drama Series.  Although it is a first it was not a surprise; his performance on FX's Pose as Pray Tell, the bombastic master of ceremonies at the underground balls that pulsed beneath New York City's nightlife in the Eighties, is quite unlike anything else on television, even during the era of Peak TV.  Of course, Pose is already history-making, even without award recognition, as it boasts the largest cast of LGBTQ+ individuals and transgender individuals ever assembled for a series.  Last week, series creator and executive producer Ryan Murphy interviewed Porter before a sold-out crowd at the 92nd St. Y.  It was a fast-moving 90 minutes of thoughtful, profound and at times hilarious conversation as Porter reflected on his career, his recent status as a fashion icon and the impact that Pose is having on the world.  “I’m here to celebrate my good friend, Billy Porter,” Murphy said at the start, to thunderous applause and the first of many standing ovations that night.

“Two years ago this week, Billy came to audition for a part that did not exist," Murphy recalled.  "There was no Pray Tell on the page. I’d known about his work for a long time, and I kept saying to our casting director, ‘We’ve got to find a role for Billy on the show.'”  The two recounted how Porter's audition for the then-unnamed Emcee who only had two lines in the pilot turned into a twenty-minute rant about how much he hated the situation the country was in at the time, and still is, under the current political leadership. The conversation then shifted to how Murphy came to see Porter as the "leading man" of the show, but Porter never considered the emcee to be more than a supporting role.

“The archetypes that I saw did not look like me,” Porter said. “There was James Earl Jones as the patriarch. Denzel Washington was the sex symbol. Eddie Murphy was the brilliant clown. I abandoned all ideas of being the leading man because all we saw was what was ‘traditional’. I am not 'traditional.'"

Throughout his career, Porter often played the supporting role that was seen as either the sidekick to the leading man or the comic relief. His characters never got their love story or a happy ending. They were merely observers and aides to the hero. “After 30 years, I kissed someone for the first time in my career this season in episode eight!" he said with a smile.

Murphy shared the love and support that he and his creative team received from the network and studio from the episode's very first pitch. “They just wanted more," he recalled. "Especially after the love scene with Billy. We even had our intimacy coordinator in tears because of how moved she was.”

“When you create a space for African American men to figure out how to love each other instead of how to kill each other, and those projects get greenlit all the time … to be able to be a part of it … I’m just thrilled," Porter said. 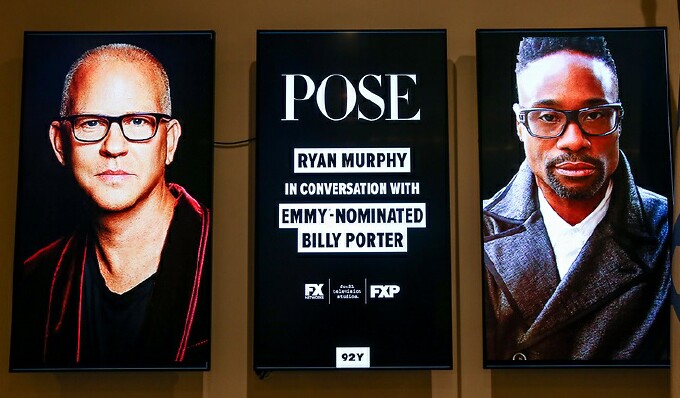 Speaking on the impact and influence that Pose has had and continues to have, Porter said, “The world needs to know what an unconventional family looks like. Family isn’t simply blood. That’s what you were born into. That’s your blood. But when the definition of family means support, your grounding, the people you go to day to day, those are people you choose. It’s all about chosen family, which can be even more important than your blood family.

“Pose is about a group of people who choose life in the face of the darked and most desolate of circumstances," he declared. "They choose life anyway, and so can you!” Cheers and applause erupted from the audience.

Porter then shared how he grew up in the black church and has continued to be a spiritual person despite the rift between the church and the LGBTQ+ community. He mentioned that he wants his character and the show to speak on that in its next season. “I would love for Pray Tell to be able to crack open the conversation between the LGBT community and the Black Church," he said. "Someone just called my mom the other day, saying to her, 'It must be so hard for your son to be gay.'

"She said, 'Don’t worry about me. Now get off my phone.'” He laughed. The audience cheered yet again.

“I had this vision board with all of these names of writers, actors, producers that I admired and looked up to,” Porter said. “I put Ryan on my vision board, thinking, ‘This bitch is the only one who’s gonna know how to deal with me. He had Jessica Lange and all the divas, he knows how to handle us divas."

Porter laughed again. “I spoke it into the universe. ‘I will work with Ryan Murphy!’ We speak what we are. We speak into existence what we want. If you say you can’t, you won’t. I’m living proof that we speak who we are.”

Murphy shared the same sentiment about speaking things into existence in the same way. “I believe that you manifest things in your life," he explained. "One of the things that I love about my career is that I have realized why I am here. The answer to that is that I never felt that I fit in, no matter my success or what I won. I never felt that I fit in. Now I have the chance to take into my shows those who are individual and marginalized and make them the mainstream.”

It’s no secret that 2019 has been the year of Billy Porter in the fashion world. From the red carpet at the Academy Awards to the annual Met Gala, Porter has made headlines and easily had the biggest and best looks at every event. “I remember Billy telling me that he got this gig to interview people at the Oscars on the red carpet,” Murphy recalled. “Then he showed me his [Christian Siriano] ball gown and I immediately thought, ‘You’re never gonna be brave enough to wear that.’

He added with a laugh, "At the same time I thought, ‘I wanna wear that!'”

Murphy asked about Porter's next instantly iconic look at the Met Gala, wanting to know how it felt to have that seismic response across so many social platforms. “That question comes up a lot," Porter replied. “It's so hard to answer, because you have to be present, grounded and prepared to continue the work, which is the reason all of this shit is happening in the first place. If you get caught up in how it all feels, the work suffers.”

An audience member asked both men if there was a person or event that gave them the confidence, strength and courage to do what they love.

“I’d say that it happened around the sixth grade," Porter said. "There was an after-school program that had musical theater. We did Babes in Arms, and there were like 100 people in the show. It was like Glee. Every single solitary role was double cast. But when the cast list went up, every role was double cast except mine. For the first time in my life I thought, 'I’m not the last one picked!' I knew I could sing. If I could keep doing this and hone this, I can get the fuck out of here."

“I was the only gay child, the only quiet one, the only non-athletic one,” Murphy shared. “At one point my grandmother pulled me aside and said, 'You’re different and that’s why you’re the most special kid to me. What are three things you want to do?' I said, ‘Dracula, Barbra Streisand and skincare.’” He laughed. “I then thought because of that, maybe there’s a way for me to be myself and not be ashamed."

Asked if he feels that Pose is a healing thing, Porter quickly confirmed that it was a healing thing for him and many others. “To go back after living through [the AIDS] crisis, it was just terror, every single day. Every day was like terror. And then, antiviral drugs came and it was over, and everybody moved on. Pose brings us back to a time that is a bit forgotten. I had friends call me last year when Pray Tell was diagnosed. A friend called me and said ‘I didn’t know that I hadn’t even mourned’ because it went away so fast. He saw that scene and he cried for three days. People were here and died, they lives were taken away so that we can do what we’re doing. Its healing to me to be a part of that and to be a part of the work.”

Murphy wrapped up the evening saying, “What I am amazed by is that 20 years ago, I was not able to have a gay character on a show and to then create this and have it so loved by FX, and now it’s on Netflix and its beamed into 100 countries and 175 million people have access to it. Those that felt like they didn’t have a voice or were unseen, it’s for them. We see you. We’re here for you. And Mr. Porter, I hear you. I see you. I love you. You really are a national treasure.”

The season two finale of Pose will be telecast Tuesday August 20 at 10 p.m.