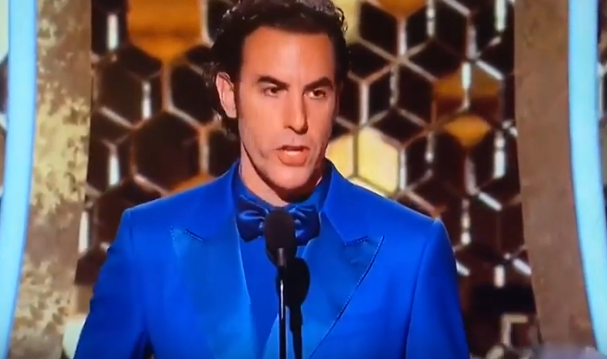 Sacha Baron Cohen, the comedian perhaps most famous for his 2006 film Borat, gained considerable attention for his sharp criticism of the Internet, particularly Facebook, at a recent Anti-Defamation League (ADL) event. Baron Cohen continued his denunciations of social media at the Golden Globes last month, describing Facebook's Mark Zuckerberg as "a naive, misguided child who spreads Nazi propaganda and only has imaginary friends." Baron Cohen is making similar comments on Twitter — attacking Zuckerberg, in particular — on an ongoing basis.

Baron Cohen's case, briefly summarized, suggests that the relative latitude given to users to post thoughts freely on the Internet risks facilitating the spread of factually incorrect or racially prejudiced content. Since content posted by regular users appears in a similar fashion to content posted by "experts," other unsuspecting users are subjected to an environment where "the rantings of a lunatic seem as credible as the findings of a Nobel Prize winner." Thus, social media users may see incorrect information posted by "ignoramuses," believe it to be true, and then vote accordingly, thus giving rise to "autocracy."

For Baron Cohen, social media has become one of the leading amplifiers of hate and false information, morphing the Internet into "a sewer of bigotry and vile conspiracy theories that threatens democracy and our planet." He even goes so far as to suggest that should current Facebook policies continue, then executives such as Zuckerberg should "go to jail."

Although perhaps initially rhetorically appealing to some, Baron Cohen's line of argument relies on a number of misconceptions, as well as a lack of engagement with the overwhelmingly positive effects that the democratization of knowledge can have. Even more far-fetched is his notion that somehow Mark Zuckerberg and other tech executives are responsible for prejudice in the world, particularly anti-Semitism./p>

First of all, as for Baron Cohen's tying of the relative free speech that exists on the Internet to "Democracy … [being] in retreat" — for all the criticisms that can be levied against the Internet, being anti-democratic is not one of them. Social media is the definition of pro-democratic; anyone can register for an account and express opinions. Participating in discussions about important world events is not limited only to those with a blue checkmark.

Interestingly enough, for all of Baron Cohen's panic about "authoritarians" on the march, he would be wise to recall that one of the first things that true authoritarians do when they reach power is, of course, to shut down access to social platforms such as Facebook. That is what North Korea does, what China does, and what Iran did precisely this last month amid anti-government protests. Authoritarians fear ordinary people doubting the narratives pushed by "experts" (and government officials) and then making fellow citizens aware of the gaps in said narratives via the Internet.

Closely related to this idea is the reality that social media serves as a legitimate fifth estate check on the news media. Despite Baron Cohen's consternation about misinformation being spread on social media — which certainly does happen — social media users, bloggers, and the like are often the ones to point out when major media players get it wrong; such as what took place this past October when ABC passed off video footage from a Kentucky gun range as a Turkish military offensive in northern Syria. Similarly, it was bloggers who recognized that Adnan Hajj's Reuters photos of the 2006 Lebanon War had been significantly digitally manipulated.

The larger point, however, is that major media players are far from sacrosanct. The lack of critical coverage of the "weapons of destruction" claim, which extended even to include the firing of war critic Phil Donahue by MSNBC, remains, for instance, far more damaging than Facebook's already-lengthy prohibitions on hate speech not being further extended.

Furthermore, Baron Cohen's arguments against social media rest on a sort of paternalism where regular people, in his view, are not wise enough to judge for themselves if the information they see on the Internet is true or not. Mark Zuckerberg actually provided a much better alternative to Baron Cohen's calls for restrictions on speech when he stated: "In a democracy, I believe people should decide what is credible, not tech companies."

In the eyes of many, Baron Cohen is hardly the best advocate against anti-Semitism and prejudice. Several Jewish writers, from David Horovitz to Yaron Luk-Zilberman to Charles Krauthammer, have argued that Baron Cohen has done far more to foment anti-Semitism — by using anti-Semitic tropes as the main driver for his comedy — than he has ever done to combat it.

The target of Baron Cohen's criticisms is almost always the United States — the nation that, according to the ADL, is one of the least anti-Semitic in the world, by percentage of population. (By the ADL's measure, approximately 10 percent of Americans buy into anti-Semitic stereotypes, compared to, say, 46 percent of Ukrainians or 92 percent of Iraqis.) And it also doesn't seem to matter to Baron Cohen that social media, in reality, is not some far-right chatroom. (Twitter users are more likely to be Democrats than the average American adult.)

Perhaps a recent actual case of sharing anti-Semitic content on Twitter might provide a telling lesson. Last week, Representative Rashida Tlaib shared the incorrect claim that Israeli settlers had murdered a Palestinian child. What happened, though, is that her actions were roundly condemned, including by ADL CEO Jonathan Greenblatt (via Twitter). This also provided an opportunity to reexamine the history of certain anti-Semitic narratives. To quote Nicholas Christakis: "The answer to speech we do not like is more speech."

Censorship does not make prejudice go away; the much better alternative is to respond to it, and free speech is essential to that process. The Internet was once considered one of the last frontiers for free speech, and some bad apples on social media shouldn't be given the power to change that.

Don't stop now! Stay in the know on auto marketing with more from Erich Prince.
Click the social buttons to share this story with colleagues and friends.
The opinions expressed here are the author's views and do not necessarily represent the views of MediaVillage.com/MyersBizNet.