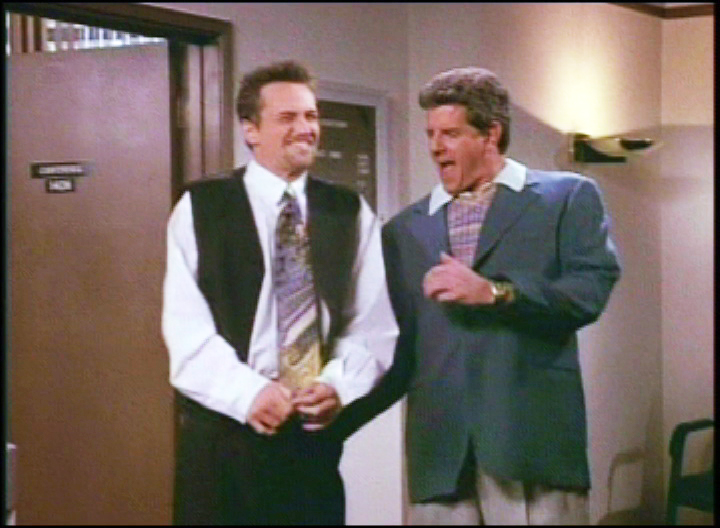 Character actor Sam McMurray could be recognized for one of any of the numerous roles he’s had over his enduring career, but there is one he is remembered for the most -- Doug, the “slap happy” boss of Chandler Bing (Matthew Perry).  Despite only appearing in three episodes of the series, and since having recurring roles in The Fosters, Devious Maids, Cristela and Scandal to name a few, he can’t escape his Friend of Friends status.  “I only did three episodes,” recalled McMurray when MediaVillage quizzed him on the subject.  “There were supposed to be more, but for whatever reason, it didn't happen.”

McMurray (pictured top right, with Perry) made his first appearance in Episode 24 of Season 3, leaving not only an indelible impression on Perry’s posterior, but also the show’s studio audience.  Doug had a penchant for showing his appreciation of a job well done by delivering a firm, exuberant, slap on the ass.  It wasn’t until Chandler took umbrage to the invasion of his personal space that Doug even realized it was a problem.

According to McMurray, it also created an issue for the show’s biggest current recurring guest star at the time, Jon Favreau, who was riding the success of his movie Swingers and enjoying a continuing arc as Monica Geller’s (Courteney Cox) millionaire boyfriend Pete Becker.  “The funny thing was mine was the ‘B’ story and Jon Favreau had the ‘A’ story,” recalled McMurray.  “He got a little-pissed off because I was getting [all] the laughs.

“Someone asked me the character name once and I couldn't remember it,” he continued.  “It drove me crazy, but I do get recognized as Doug quite a lot.  I was playing golf in Santa Fe once with four New Mexicans, and they were all like, ‘I know you!  I remember you dude, slap on the ass!’  It's so funny.”

For McMurray that memorable appearance wasn’t his first encounter with a Friend.  “I’d worked with Mattie on his first job,” he recalled.  “He was 17 and he did a sketch with me on the old Tracy Ullman Show on Fox in 1987.  It was just one shot.  I knew Jennifer (Aniston) from a sketch show she did called The Edge and Courteney through mutual friends.”

However, it seems McMurray’s Friends association runs a little deeper.  In 1987, while a regular on the Ullman show, he shot a Fox fall promo (see below) featuring Perry and the stars of the newly minted network.  The promo featured the casts of then-new shows 21 Jump Street, Married … with Children and Duet.  The latter ran for three seasons on the network and co-starred Alison La Placa.  She would later play Rachel’s (Aniston) Bloomingdale's boss Joanna, who after a few dates with Chandler (Perry) handcuffs him to her office chair in the heat of passion, only to have the “favor” returned.

According to McMurray the love for Doug runs deeper than just your average Friends viewer and now extends to his co-stars.  “I did a movie in Cleveland with Tom Wilkinson, who played my best friend,” he recalled.  “I heard he was as anxious to meet me as was I to meet him, and the first thing he said was, ‘So when the show plays in the U.K. how are you paid?’  I told him it was a one-time check for overseas usage and I realized he is completely obsessed with the show.  That was the icebreaker; he just wanted to talk about Friends the whole time.”

These days, McMurray says, “I don't really watch Friends now.”  Watching his bank balance, however, is another matter.  “I [do] watch the SAG pages to see if I might get paid,” he smiled.  “It's like the gift that keeps on giving.  It's a great thing to be associated with and it was a great set to be on.  I loved all the cast members, but I really got to know Matt LeBlanc (Joey Tribbiani) and he was my favorite.”