"Roseanne," "The Talk": Sara Gilbert Is the Master of Multi-tasking 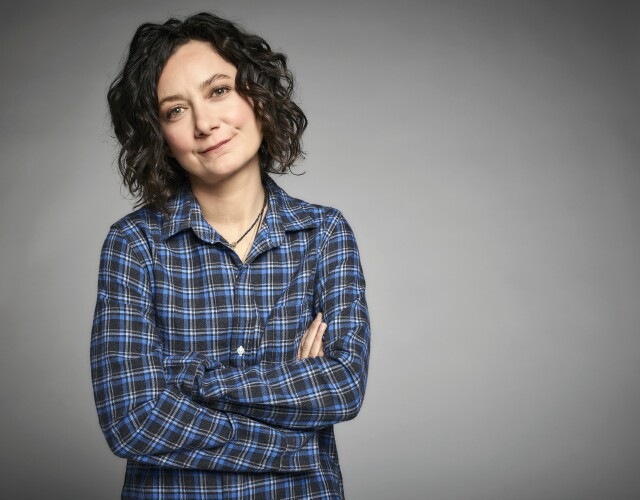 Life recently got a little bit busier for Sara Gilbert, known in recent years as co-host, co-creator and executive producer of CBS’ daily chat program The Talk.  In addition to her duties on that show, Gilbert now has a recurring character on the same network’s new comedy Living Biblically, and beginning tonight, she’ll be seen revisiting her TV past in the return of the classic sitcom Roseanne.  Knowing how close they all are, it's no surprise her co-hosts at The Talk gave Gilbert their blessing when she embarked on this latest television adventure.  "They were really excited for me as they knew how important this was to me," Gilbert told MediaVillage during a recent conversation. "They have just been so supportive, they're like my best friends so they’re really just like how best friends would be."

With The Talk now in it’s eighth season, Gilbert is thankful to be able to loosen the reigns a little on the show she co-created, affording her the time to be able to do a variety of things.  "I was very hands-on with it in the beginning," she shared.  "But over time I've kind of stepped back and [can] let [others] run it."  The fact the “new” Roseanne shot right next door to The Talk's soundstage helped.  "[That] made it really easy," Gilbert laughed.  "In terms of the schedule, there was a night where after a taping of Roseanne I had to skip the curtain call to make [a taping of] Living Biblically.  It was a crazy few months and I will say now, things are getting a little more back to normal.  I’m getting to see my kids more."

In the reboot, Gilbert's character, Darlene Connor, moves home with her two kids (both for economic reasons and to look after her parents, Roseanne and Dan) so stepping back into her “old home” after 20 years was both "surreal and natural" and felt like no time had passed.  "It was like going back to elementary school, kind of like, ‘Oh, I'm a student again,’” she explained.

However, she wasn't surprised by the set itself.  As an executive producer of the reboot she was hands-on with the painstaking effort taken to recreate it, right down to that infamous afghan-draped couch.  "Because I was producing the show it was important that we maintained a lot of the original feeling, so I was looking at wallpapers and carpets,” she said.  "Pretty much nothing is original.  It's all re-created.  We found the plans to the set so we knew all of the dimensions and beyond that, it was a lot of re-creating."  Still, it was the Conner couch that proved the biggest obstacle for production.  "We did find the original couch," she noted.  "But it's in [the Smithsonian] and there were too many stipulations on having a guard [with it] who had to be there on days that we were shooting, just things like that, so it wasn't going to work out in terms of production." 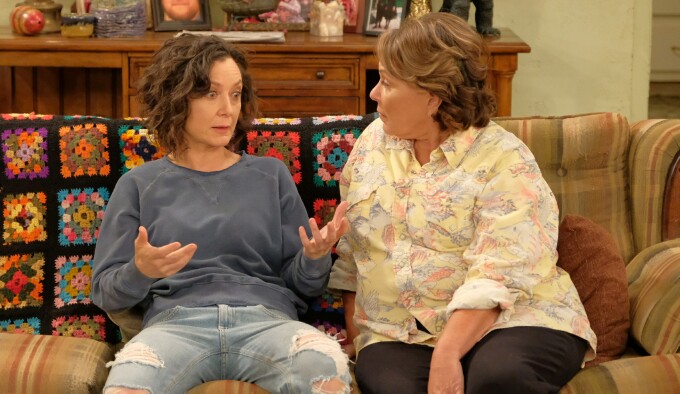 When it comes to the Roseanne reboot she appreciates the stakes are high and didn't want to do anything to tarnish the original's legacy.  "This was something none of us wanted to let anybody down with," she explained.  “So the stakes were really high and I think that motivated me to make sure that the bar stayed really high.  Luckily, I had a great partnership with Roseanne (Barr, pictured above right with Gilbert) and Tom (Werner), so there was a group of us basically on quality control and that's essentially what you're trying to do, to make sure it's as good as it was."

During it's run, Roseanne was one of the most groundbreaking shows of its time, and like the set and cast of this nine-episode reboot, nothing has changed.  "The show was always forward-thinking and covered a lot of topics before people were really talking about them," Gilbert recalled.  “It always tried to push the envelope. I think it will continue to do that, especially talking about things like healthcare and people having a lack of access to what they need.  There are a lot of topics covered but if you watch the whole nine episodes you'll see we don't shy away from any of it."

One topic Gilbert was happy to tackle -- kids exploring gender fluidity -- something Darlene's young son Mark (Ames McNamara) does with his fashion choices, much to the chagrin of grandpa Dan (John Goodman).  "That was my idea and was very important because we all know kids like that," Gilbert said.  "We wanted to represent the world and make sure we were giving voices to people that haven't been represented enough on television."

Roseanneis telecast Tuesday at 8 p.m. on ABC.  The Talk is telecast daily on CBS.  Living Biblically is telecast Monday at 9:30 p.m. on CBS.