Sarah Drew on Her Second Lifetime Christmas Movie, "Twinkle All the Way" 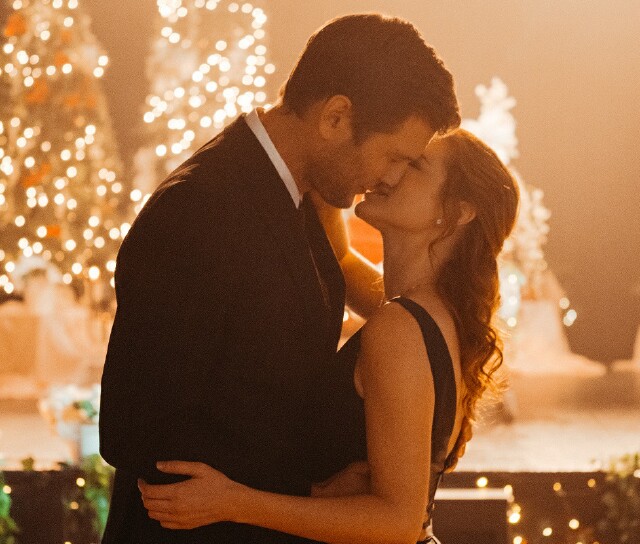 Sarah Drew returns to Lifetime this weekend, starring in Twinkle All the Way, her second Christmas film for the network in as many years.  She stars as Cadence Clark, an over-achieving, over-organizing and over-multi-tasking wedding planner, trying to pull off the promise she made to her best friend – the creation of the best holiday-themed wedding of her career – if snowstorms and a host of setbacks don’t prevent her from doing so.  For Drew, the character hit close to home.  “She’s neurotic and very tightly wound, but adept,” she laughed during an interview with MediaVillage.  “I called her a functional neurotic.  I’m a little bit of all those things, in that I’m a perfectionist to a fault in terms of focus and work.  The first weekend of production in Toronto, I got together with my co-stars Ryan McPartlin (pictured at top with Drew) and Brian Sills for a breakfast/work session that turned into nine hours.  We found little beats and moments that connected the three of us.  The chemistry is so important because if it’s not there the movie is not going to work.

“I think the nine-hour work session proved that I’m a perfectionist,” she continued.  “I’m someone that always strives for excellence and for things to be the best they can be. Sometimes that means working something a little to death, which I’ve done, but I’m not one to do anything by half.”

Drew said that despite the fact the three leads hadn’t worked together before, they were committed to making the best movie possible.  That didn’t get in the way of also having some fun.  “Oh, there were a lot of late-night shenanigans,” she laughed.  “Although not while we were working.  We had these Insta-dance parties that we would post to Instagram.  At one point, Brian, Ryan and I were all trying to stay awake at 3 a.m. and we had this hilarious and spontaneous party.

“Then we started getting the fans involved,” she added.  “Everyone was trying to decide if the next dance break would be to Footloose or something from Dirty Dancing, so we asked everyone to vote.  The results were pretty even, so we did one of each.  We had a lot of fun, but we didn’t do the lift, which Ryan was very mad about.  He wanted to incorporate the knee-slide from Footloose and wanted to do the Dirty Dancing lift but if [he] broke his back or I fell out of my dress or ruined the wardrobe we would have gotten into so much trouble.”

When it came to her own 2002 wedding, Drew admitted she wasn’t so over-organized, having preferred to leave the details to someone with experience.  “I got married so young that I planned no part of my wedding,” she shared.  “My mom did the whole thing! I was super organized through college and high school, so I thought the commitment and the enormity of this decision I was making was enough to keep my brain active.  I stayed in the commitment space, while mom made everything happen, kind of like I do for my best friend in the movie, as my character doesn’t want to break a promise.”

According to Drew, there is a special message in Twinkle All the Way that she hopes viewers will take away.  “I think the movie is really about taking time to appreciate the things in your life and not be so involved in your life,” she explained.  “The hope is that you show people what it means to take a breath, take a step back, and allow things to fall apart.  Sometimes the most beautiful things happen when something falls apart.  That above all is the greatest lesson in the script.  And at least in my journey in life, I’ve found when things do fall apart, a new seed is planted and that’s exciting.  So, for my character, the fact her plans fall apart leads to [things] becoming something else, and it ends up being something more beautiful and more moving than she could have ever imagined.  It’s a real testament to the kind of story wanted to tell.”

She also has a special take on those little Christmas miracles that happen around the holidays.  “I actually believe in them all year round,” she said with a smile.  “Sometimes they’re small, sometimes they’re epic.  I call them ‘God hugs.’  It could just be someone saying something, or doing something, that makes you feel about something in a new way.  They’re happening all the time, but you have to be in the right space in your heart and mind to be able to see them.”

Twinkle All the Waywill be telecast Saturday, November 23 at 8 p.m. on Lifetime as part of the network's It's a Wonderful Lifetime holiday movie event.